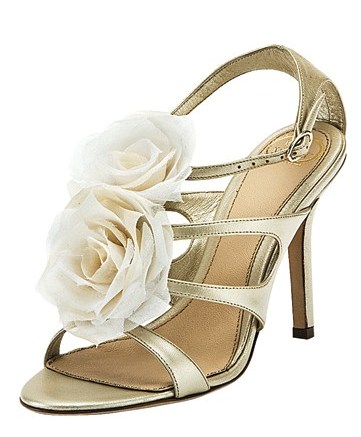 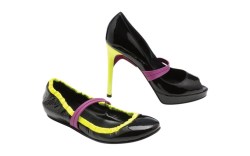 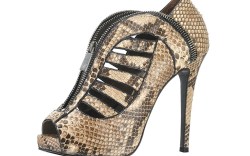 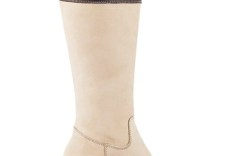 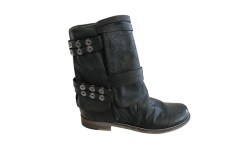 Mary Norton is taking her shoe designs down the aisle. The Charleston, S.C.-based designer is launching a capsule collection of bridal footwear and handbags for fall ’09. The collection, which will be sold at high-end boutiques, Mary Norton stores and Marynorton.com, includes shoes with oversized chiffon flowers (at right), ostrich feathers and crystals retailing for $495 to $795. Coordinating handbags adorned with tassels, chiffon flowers and feathers will sell for $495 to $995.

If you can’t beat the recession, then work around it. That’s Ruthie Davis’ mantra during these trying times. The New York-based designer bowed a collection of shoe “combos” consisting of one Davis by Ruthie Davis pump and one takedown flat in the same color, all crafted from Italian leather and some featuring hardware details. The two shoes will be sold together for $698 to $798 in a custom Ruthie Davis graffiti bag, made for toting the shoes around for work or travel. The sushi-inspired collection, which bears style names such as Edamame and Sashimi (at left, below), will hit high-end independent retailers this fall.

After honing her skills in footwear design at Reebok and Calvin Klein, Heather Williams has gone solo, launching H. Williams for fall ’09. Made in Italy, the collection, which retails from $495 to $1,400, features suede latticed peep-toe pumps and crocodile stamped gladiator booties. Pleated satin wristlet satchels, iridescent metallic python clutches and large shoulder bags retailing from $850 to $2,200 are also included in the offering. The full collection will be available at independent specialty boutiques beginning in September.

Edinburgh, Scotland-based Hunter Boot, best known for its rubber rain boots, is launching its first leather boot collection featuring water-resistant suede and leather styles priced from $225 to $525. Made in Italy, the collection comprises several styles for men and women, including riding boots with a back-zip closure and embossed “H” crest (at left), and suede lace-up ankle boots with a shearling lining. The collection will ship to select department stores, boutiques and Zappos.com in July. According to the company, additional footwear categories are likely to follow as it looks to build Hunter into a lifestyle brand. Hunter is owned by U.K.-based Pentland Group.

Tiffany Tuttle, whose LDTuttle collection of edgy heels and boots has a slightly androgynous flair, is launching a line of unisex footwear. For her seventh season, Los Angeles-based Tuttle created a five-style selection of flats, sneakers and boots (at right) made for both women and men. “I wear a lot of men’s clothing that I get at vintage stores,” Tuttle said. “So I thought, ‘Why can’t the shoes be like that, but also be something men could wear?’” The unisex collection, which is made in Italy, will retail for $450 to $600.

Rebecca Taylor has garnered a celebrity following with her ultra-feminine ready-to-wear collection. Now the New York-based designer is expanding her budding footwear business. Taylor, who has seen her clothing on the likes of Sarah Jessica Parker and Cameron Diaz, introduced shoes for spring ’09 and is tripling the size of the Brazil-made collection for fall. The designer has partnered with the Peter Marcus Group, based in Greenwich, Conn., to create a line of 33 footwear styles ranging from patchwork pumps to knee-high boots. The collection is expected to retail for $275 to $535 at high-end department stores, such as Saks Fifth Avenue and Nordstrom, and specialty boutiques.