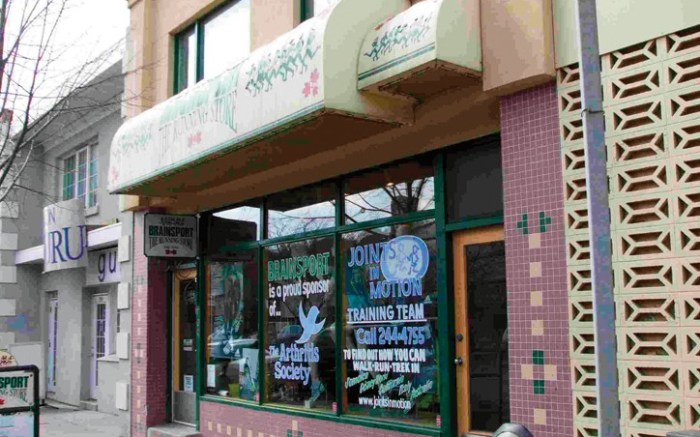 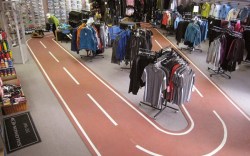 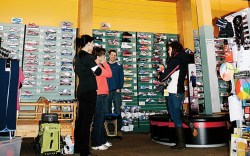 Runners in western Canada have gorgeous scenery and great trails — and cold winters don’t get in their way. To serve these stalwarts, local running independents rely on personalized service, innovative product and community outreach to keep customers on the go, no matter the weather.

At Brainsport, located in Saskatoon, Saskatchewan, the heart of the Canadian prairies, serving dedicated runners in the winter means playing both sides of the field. “We’ve had an incredibly cold winter this year, so people are looking for lots of insulation and protection from the wind,” said Lisette Schermann, manager of the 1,200-sq.-ft. shop. “But for footwear this time of year, it gets split 50/50 with people looking for shoes to wear on the treadmill.” She said indoor runners are looking primarily for cushioning and breathability, while outdoor athletes are on the hunt for good traction and warmer uppers.

Brainsport, which was founded in 1991 by runner Brian Michasiw, stocks a variety of technical brands, including Asics, Brooks, Mizuno and Saucony. And it takes its commitment to growing the sport seriously. In addition to a free running clinic that departs from the store twice a week, the store hires coaches to teach running clinics for all kinds of races: a 10K, half marathon and marathon. “[Clinic runners] do a structured program of 18 to 19 weeks, depending upon the event. It’s a great way to build clientele to introduce people to the store and to the sport,” Schermann said. “In a lot of ways, for us to grow our business we have to grow the sport. So a lot of our strategies are focused on the whole community, not just our customer base.”

Being located five minutes from downtown Vancouver gives North Shore Athletics an urban consumer base, but when it comes to winter runs, owner Keith Nicoll knows his customer is looking to get a little more rugged. “In North Vancouver, we have a lot of trail networks, and a lot of our customers run on trails,” he said. “What people have been looking for is a supportive shoe that will give them stability on an uneven terrain.” But catering to those runners means more than just stocking heavy-duty looks from Inov-8, Salomon and others, Nicoll said. Grip-enhancing chains from Yaktrax and spikes from Kahtoona are big sellers in colder months. “People don’t want to stop running, so they buy spikes for their shoes,” he said. (The store also offers snowshoe rentals and trail running clinics for winter fans.)

Keeping abreast of the newest technology in running is a focus for the 9-year-old store. Being an early adopter of microspikes, snow shoes and the midfoot running brand Newton differentiates North Shore Athletics from local competition and is a point of pride — as is an emphasis on customer service. “We try to get to know our customers so we know what they’re looking for before they even come in the door. We know their shoe type. We know what’s going on in their lives,” Nicoll said. “[This is] a place for people to come by and say hi and find out what’s going on in the world.”

Gord Hobbins, owner of Gord’s Running Store, sells shoes to runners who come to his store — and also takes shoes to those who can’t.

Hobbins, whose store celebrates its 19th anniversary next month, specializes in fitting runners with highly technical shoes at his roughly 2,000-sq.-ft. space in Calgary, Alberta. But he also serves community members whose age or medical conditions make athletic shoes a must. And he makes housecalls to senior centers and other locations for customers who can’t get out to the store.

And for those looking to get out in the winter air, Hobbins stocks a few added-traction options: Yaktrax, GripOns and heavily treaded styles from New Balance and Swedish brand Icebug. He said that in the past several winter seasons, he has brought in more waterproof styles — including trail runners from Inov-8 — and now has five or six styles with Gore-Tex and other systems. “Runners like those because the wind doesn’t cut through them,” Hobbins said, adding that athletes using the city’s extensive network of paths and trails have some winter advantages. “In Calgary, we’re fortunate because the city has dedicated snow removal for the bike paths — they probably do a better job than they do on the roads,” he said. “The local runners get spoiled.”

Getting people out on the course is a big push at Gord’s. The store participates in some three dozen local races every year, and serves as lead store for races in surrounding towns without their own specialty running shop. Up next? Calgary’s Frozen Ass Fifty, a 50K race on Feb. 16 that Hobbins expects to attract 125 athletes.