Wayne’s World: From Footwear to Football 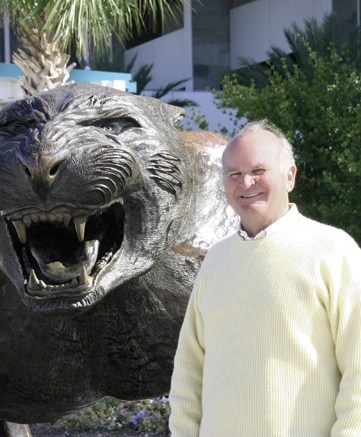 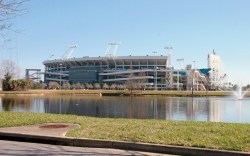 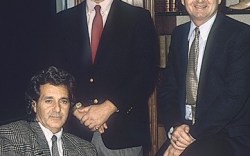 JACKSONVILLE, Fla. — No more crazed fans. No more beers for sale. No more football to be played.

It’s a quiet January morning here at the Jacksonville Municipal Stadium, less than a week after two NFL teams earned a trip to the Super Bowl in Tampa, Fla.

Wayne Weaver’s Jacksonville Jaguars wasn’t one of them.

In fact, his team’s season unofficially ended long before the high-stakes playoffs ever kicked off. And fi nishing the year with a dismal record of five wins and 11 losses doesn’t sit well with Weaver, who, at 74, is as competitive now as he was during the years that he, Jack Fisher and Vince Camuto built Nine West into a footwear powerhouse.

“It is painful to lose,” Weaver says from his office, which sits on the stadium’s ground floor and is lined with game balls, family photos and tons of Jaguars memorabilia. “When you’re competitive, and particularly when you go into a season believing you’re a couple of players away from competing at the next level, and then to have a season like we had, it is disappointing. We had 15 players on injury reserve this year at some point during the season, and eight of those were starters. It’s hard to win. But that’s part of the game, and you have to accept it and you have to have a roster where younger guys can step in when those things happen.”

Though Weaver speaks in a soft, laidback style, you shouldn’t be fooled. He’s fiery about football and is willing to make bold moves to improve the 2009 season.

Weaver already is pressing the organization’s staff to reach out to top suite holders and other loyal fans, as well as big corporate sponsors to secure them for next year. And he’s also arranged a large network of volunteers to call ticketholders with the aim of getting them to renew. Those callers who excel at sales can win special perks, including a visit to the football field or a trip to one of the team’s away games.

“We’ve got to get more production out of our players,” he says. “We go into every year with the expectation of getting into the playoffs and having a chance to compete for the Super Bowl. That’s our goal. We don’t know when. It’s not if, it’s when. In fact, every day I come to work — and I’ve done this throughout my career — I feel like I can do something to make this franchise and my business better.”

So far, he’s had a pretty good run at making things better, and turning them into financial windfalls.

Long before the Jaguars, in the 1950s, Weaver worked as a shoe salesman for Brown Shoe Co.’s Wohl division. He soon rose to manager, and then to SVP of its retail group. But his next move turned out to be the most lucrative: forming Nine West with Fisher and Camuto. From 1978 to 1993, the executives turned a small wholesaler into an industry giant, before the three strong personalities began to clash and Weaver eventually left, selling his stake in the company after its $140 million initial public offering in 1993 and using some of the money to buy an NFL expansion team.

But that’s all in the past — Weaver now looks back on those years fondly.

“I have great respect for both of them and our years together at Nine West because we did build something special, and it’s a credit to us and our organization,” he says, admitting to an occasional peek inside Nine West stores to check out product and marketing. “All three of us live in different worlds now, so we don’t have the opportunity to see one another.”

In 1988, while at Nine West, Weaver also purchased Shoe Carnival, which had four stores at the time. Since then, it’s gone public and grown to 311 doors. While Weaver holds the chairman title, he leaves the daily operations to CEO Mark Lemond. Additionally, Weaver also owns Liz Claiborne Footwear.

“Whether it’s a football franchise or a footwear company, running them comes down to basic business,” says Weaver. “You have to get smart people who are passionate and share your values and goals for the organization. You have to empower them to do their jobs, give them the tools they need to be successful and then hold them accountable. If you do that, good things will usually happen.”

But right now, the economy has made things pretty difficult — and is presenting all businesses with what he calls the most catastrophic period he’s seen.

Still, Weaver says there are lots of reasons to worry.

Rocking in his chair, contemplative, he says the government bailouts, which are backed by debt, could lead to inflation. He’s also concerned that the extreme markdowns at retail are eroding industry margins, and that the country may have too many stores stuffed with too much inventory. Then there’s the problem of the consumer, who Weaver believes has hit the “reset button” on the way they spend.

No surprise, then, that the economic downturn is impacting Jaguars’ ticket sales and the number of jerseys and other merchandise being sold across the country.

“The National Football League is clearly America’s sport, but we’re suffering the same things that the rest of the markets are feeling in terms of ticket sales and sponsorships,” Weaver says. “We are fortunate that most of our deals are done on a long-term basis, so they are already locked in. What’s really important now is that you have to make sure you work with those people and look for ways to add value in those relationships at this period in time.”

To that end, Weaver is clearly looking ahead. He is focused on strengthening the football franchise and keeping the team in Jacksonville, despite dogged rumors that he is considering selling the team to a larger market such as Los Angeles.

Weaver says he enjoys all that Jacksonville has to offer, from its beaches to its ports — and he has no plans to bail out.

Nor does he plan to slow down. Away from the gridiron, Weaver keeps fit by jogging three miles, three days a week. And he’s been traveling with his wife of 54 years, Delores, who runs the Jaguars Foundation, which doles out grants to underprivileged children and families. In the next year, the Weavers will visit Rwanda to track silverback gorillas.

“I may look in the mirror and see an older guy there,” says Weaver, “but I see a guy who thinks the same way I thought 25 years ago.”