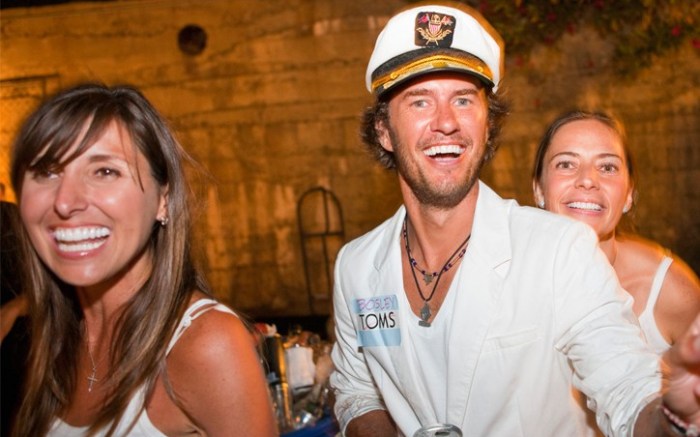 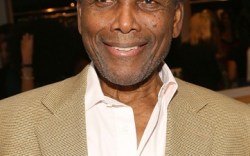 In Los Angeles, Toms Shoes and Trovata teamed up for a classic family reunion-style party, where guests were encouraged to come dressed as family members from decades past and pose for a family portrait. The winning family was to receive a $1,000 shopping spree from Toms and Trovata. But the competition was fierce, from a Flintstone family to a group dressed as Toms founder Blake Mycoskie’s real family and even a collection of “Blakes” (who, apparently, raided Mycoskie’s closet to snag pairs of his trademark plaid pants accessorized with chewed pens behind their ears). Mycoskie and his executive team dressed as Charlie’s Angels, with Mycoskie playing the roll of, you guessed it, Charlie. But how do you portray a character barely ever seen? “I know! They just told me to look like I was at the beach,” he said. “I guess I’m more Bosley than anything else.”

On a more serious note, Mycoskie said he was prepping to leave on another three-week shoe-giving trip to Ethiopia on Sept. 26, where he’ll be trailed by photographer Kwaku Alston and a documentary crew from Woodshed Films to spotlight the plight of people suffering from the debilitating foot disease podoconiosis. “One out of 13 kids gets this. It’s like a modern-day leprosy and it’s totally preventable with shoes,” he said. “We’ve got to get people to understand how bad this disease is and how people are suffering.”

Across town, Insider met up with Velvet Angels CEO Jeff Yarchever outside a party at L.A.’s Fred Segal Feet, where he showed off the Velvet Angels limo, complete with bar, two plasma-screen TVs and a stereo. A second, larger limo — both are Mercedes — should debut at the end of the month with a 52-inch TV, a lit shelf displaying the brand’s shoes, a computer station and a karaoke machine. “It’s a nightclub on wheels,” said Yarchever. But it’s also helping to attract some big names to the brand. Yarchever said the limo would be used to transport celebs such as Katy Perry and Rihanna to and from their performances while on tour.

British songstress Lolene has also asked Velvet Angels recently to style a special shoe for her to go with her upcoming song “Bitch Pump.” And Yarchever just reached a deal to co-sponsor the release party for Snoop Dog’s new album coming out in November. Still, Yarchever said he tries not to focus on the celebrities too much. “I really didn’t do this for celebrities,” he said. “Of course, that doesn’t hurt, but I’m a businessman. I just want to make something women love.”