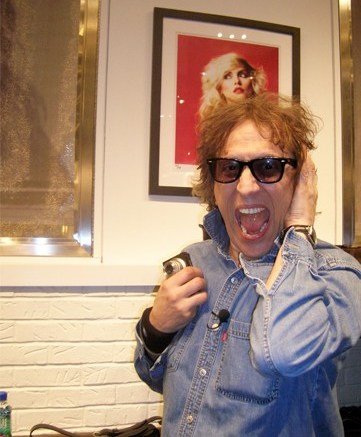 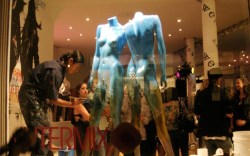 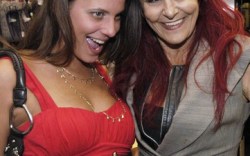 While many stores throughout the city put DJs in their window displays, Intermix in Soho went in a more artistic direction, assigning a painter to change up the color on a pair of sky-blue, headless mannequins. Was it a metaphor, perhaps, for the changing seasons, or just plain entertainment for the fashion fans lined up outside the store last night, waiting for entry? In either case, the crowd inside sipping cocktails was at capacity, and even though celebrity guests Sienna and Savannah Miller had flown the coop by the time Insider hit the scene, the promise of a glimpse of the famous sisters was still enticing guests behind the rope. Alejandro Ingelmo, who also met customers and fans at Intermix, said, “I had a good time. It was great to see a whole bunch of people excited about spending time in stores again.”

David Z was right smack in the middle of the Fashion’s Night Out action in Soho, but only saw slightly more traffic and sales as a result. “It was actually busier earlier in the day,” said Ahsan Kalam, an HR manager who was overseeing the store for the night. Though the retailer wasn’t handing out any free booze or complimentary gifts, it was clearly prepared for the extravaganza, with twice as many salesmen on hand as there were shoppers. And that might’ve worked in its favor. “The capture rate has been pretty high tonight,” Kalam said.

Soho shoppers passing Steve Madden’s store got some enticing by a slick DJ-in-the-window trick and two fast-talking door promoters singing the praises of Diane Birch, a rising songstress spotlighted by the shoe brand’s music arm. Inside, youngsters milled about, and those who splurged took home Birch’s new album for free. Also on hand was brand director Rob Schmertz, who said it was too early to declare the night a hit. “There are still three hours to go for sales,” he said, as he was hurrying out to the brand’s Midtown store. “We are all for anything that has to do with helping New York. Tonight shows the country that New York is the fashion capital of the world.”

At John Varvatos’ Soho shop, well-styled casually cool hipsters set the tone, knocking back mixed drinks in between flashing their pearly whites for legendary lensman Mick Rock — the guy known for capturing the most iconic raw stills of David Bowie, Iggy Pop and Debbie Harry. Rock was photographing and autographing pictures for those shoppers who bought $300 worth of goodies. Meanwhile, the designer himself was said to be on his way back from Milan.

Over at Odin’s Lafayette Street store, CFDA Fashion Fund nominee George Esquivel was showing off his fall footwear collection, which landed in the men’s shop earlier that day. Odin customers, including fellow footwear designer Rafe Totengco, were keen on Esquivel’s New York-centric details, such as rubber-striped soles, as well as removable suede boot sleeves that Esquivel had designed at the prompting of store owners Eddy Chai and Paul Birardi. “These guys are such trendsetters,” said Esquivel. “Everything in their store is really special and unique.” The Los Angeles-based shoe designer was fresh off his photo shoot for the Nov. 16 CFDA Fashion Fund event, an experience he called “nerve-wracking, but exciting.” As for choosing a CFDA mentor, should he be the chosen designer this year, Esquivel said humbly, “There are so many great people in the industry that I’d love to pick the brains of for 12 months, from designers to manufacturers to retailers. For a company my size, every dollar counts.”

At Tory Burch’s Little West 12th Street boutique, the pint-sized designer presided over a festive street party, complete with picnic tables, grilled corn-on-the-cob and mini-Coronas. “It’s so important to give a boost to the economy,” she told Insider. “We have to get people excited about shopping. The fashion industry is the second-biggest industry in New York City, behind the financial industry. If people aren’t shopping, jobs will be lost.”

Christian Louboutin’s Horatio Street Boutique was transformed into “Loub’s Lounge,” complete with a slew of mini disco balls, deep scarlet lighting and pint-sized champagne bottles with straws. Even as the rain began, the line of anxious ladies ran around the block as the postage-stamp sized store could only accommodate a few additional ladies at a time.

But throughout the Meatpacking District, the uneven brick streets were little obstacle for high-heeled Fashion’s Night Out shoppers, who hit Tracy Reese for manicures and makeup consultations, Moschino for tarot-card readings and the luxury emporium Jeffrey for glimpses of hunky Hugh Jackman (although owner Jeffrey Kalinsky was absent, on sabbatical until the New Year).