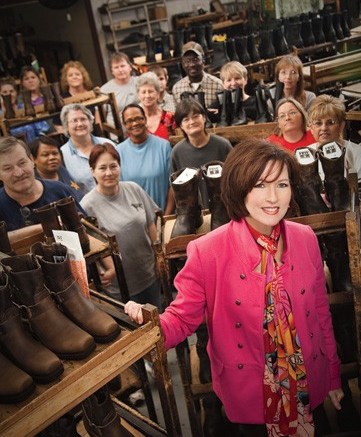 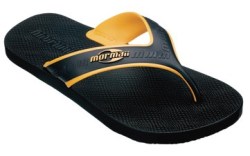 ≥Saving Green
Greening up her factory isn’t the only way Martha Jane Murray wants to make a change. Murray also is seeking to help green up her employees — and save them money in the process.

Together with her husband, Neil Munro, Murray owns and runs NMF Inc. in Wynne, Ark. The couple bought a factory 18 months ago from Munro’s family (Neil’s father, Don Munro, is chairman and CEO of Hot Springs, Ark.-based Munro & Co.) and produces the Neil M. men’s line, Frye’s women’s boots and other items. It’s a joint venture between the husband and wife, and while Munro brought the shoe knowledge, Murray (at right) brought something else to the table: her background in green architecture and advocacy.

An architect who spent two years working with the Clinton Foundation Climate Change Initiative, Murray said her first act after purchasing the Wynne factory was to do a complete energy audit of the 50-year-old facility. They soon found that a $60,000 renovation (offset by two $13,000 credits from Entergy Arkansas, the local utility, and the local chamber of commerce) would save $40,000 a year in energy bills. Murray said the renovation made her think. “I felt these were lessons we could transfer to our employees,” she said. Audits and renovations such as the ones planned for the factory could save employees hundreds of dollars a year, but upfront costs put the projects out of most families’ reach.

So Murray decided to spearhead a project to bring energy savings to her employees. She created a test group of 20 employees who could access a revolving $40,000 loan fund to finance renovations to make their homes more energy-efficient.

Last fall, Murray and her team oversaw audits of the 20 homes in the program, then connected each homeowner with certified installers and contractors who performed a first round of sealing, insulating and other improvements. The cost per house varied, Murray said, but averaged around $1,500. Coupons from the utility company, Entergy Arkansas, reimbursed half the cost of the jobs, bringing the average spend per household down to between $750 and $1,200. Murray said the company offers three structured payback options for participating employees, giving them some flexibility in paying back the no-interest loans — and giving them a chance to actually bank some of the savings they’re seeing.

The results, on both an emissions level and cost level, have been impressive. “We’ve seen 30 percent savings, on average, on the low-hanging fruit [of the initial projects],” Murray said. “And it’ll probably go as high as 50 percent [with more intensive renovations].” That can add up to a per-house greenhouse gas reduction of three to four tons a year, but also to savings of $30 to $50 per month for renovated households. And while the carbon reduction benefit is big, Murray said, helping employees save is even more important. As a domestic manufacturer, she explained, “it’s hard to compensate our employees at the highest level we’d like to [and still] compete.” Bringing down the energy bills, she added, can be the equivalent of a 5 percent to 10 percent raise.

Going forward, Murray said she hopes to dramatically expand the program, dubbed HEAL Arkansas (for Home Energy Assistance Loan), by writing a grant proposal for a statewide pilot program. She’s also working to grow it at the Wynne factory, investigating programs that would help mobile homeowners, as well as renters. The program, she said, has been a big help in retaining staff. “It’s an intimate relationship once you walk into someone’s home,” she said. “And their loyalty in turn has been tremendous.”

≥Let It Snow
Sustainability-minded sock maker Teko is doing its part to keep winters white. The Boulder, Colo.-based company has partnered with Crested Butte, Colo.-based Save Our Snow Foundation — an organization devoted to educating the outdoor industry about reducing global warming — to create a line of ski socks to benefit the group. The unisex Ski Light style (at right) is made of organic, chlorine-free merino wool and recycled polyester and features a seamless toe, arch support and cushioning designed to work with ski boots. The custom style features the letters “SOS” knitted into the leg, as well as images of wind turbines (the socks are created in North Carolina in a factory powered by wind). Teko will donate $1 from the sale of each $23 pair to Save Our Snow. The socks will deliver to stores in July.

≥Cycle of Life
Brazilian wetsuit company Mormaii introduced sandals and flip-flops in the U.S., and a key part of the launch is the Neocycle line (below), a men’s collection that uses recycled neoprene from two sources: scraps created in the production of Mormaii’s wetsuits, and the used wetsuits of some of surfing’s major names (including, the company said, Heitor Alves, Neco Padaratz and Marco Giorgi). The four styles in the Neocycle collection will retail from $20 to $45 and are delivering now to surf shops.