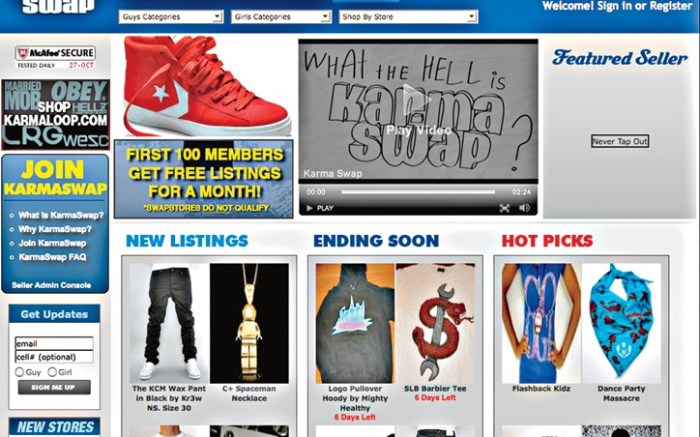 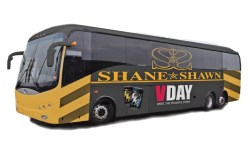 Boston-based streetwear e-tailer Karmaloop.com has launched KarmaSwap.com this month, a new site where underground brands can sell product and where streetwear enthusiasts and sneaker collectors can sell or swap goods. The idea behind KarmaSwap.com, said CEO Greg Selkoe, was partially a reaction to the countless up-and-coming vendors who want to sell on Karmaloop.com — but only about 2 percent of new brands that apply to sell on the site are actually added to the assortment. KarmaSwap.com, he explained, gives new brands the chance to showcase their lines, and gives the sneaker traders and collectors a platform to buy and sell goods, gadgets and gear. The site, which is still in beta mode, is growing daily with new participants.

As the new business progresses, Selkoe said he hopes to set up a system in which consumers can trade products without any kind of monetary exchange.

Overall, Karmaloop.com had a great year despite the difficult economic situation, with sales up 50 percent from last year, said Selkoe.

“One of the things that made us successful is that we didn’t overthink things. We don’t make any projections or come up with a strict plan,” he said. “That’s the approach we’re taking here. We want to see how consumers respond and see where we can take it.”

Barney’s New York opened a new two-level, 60,000-sq.-ft. store in Scottsdale, Ariz., on Oct. 15, marking the company’s ninth flagship. When it comes to the footwear assortment, the retailer was betting on basics this season for the women’s shoe salon, focusing on core designers including Lanvin, Givenchy, Christian Louboutin and Balenciaga, said Lisa Park, VP and DMM of women’s shoes.

“While you won’t find any styles in Scottsdale that aren’t represented in our Madison Avenue store, the selection has been tweaked. We wanted to highlight the newest looks within the assortment,” explained Park.

Boots, she added, have been particularly strong this season.

“Boots have become their own category. There are boots for every occasion, from flat to high-heeled, ankle-length to over-the-knee, classic, Western, rugged to dressy.”

Designers Shane & Shawn Ward have had enough of the brick-and-mortar lifestyle. The duo is moving out of their store in Manhattan’s Nolita neighborhood and launching a mobile flagship this January, taking a tour bus on the road and bringing merchandise to the consumer. “We thought, ‘How can we get our brand to the people?’ and thought it would be cool to do a rock-tour type of format, but with designers,” said Shawn Ward. About 75 percent of shoppers who visited the Nolita store were tourists, said Ward, which also supported the idea.

Starting Jan. 21, the mobile store (below) will make its first stop in Park City, Utah, at the Sundance Film Festival. “We’re going to places where there is a condensed group of our consumers,” said Shane Ward, adding that the bus will coordinate its stops with high-profile events, including the Super Bowl in Miami in February and the Tribeca Film Festival in New York in April.

“For 2011, the plan is to take the tour to international cities,” added Shane Ward.

The designers will keep consumers updated via Facebook and Twitter announcements, and at each city, they will host a launch event. A store-like atmosphere will be set up outside the bus with furniture, carpets and a canopy. Celebrities and VIP shoppers will be invited onto the bus for special fittings and shopping opportunities, the Wards said.

“Things are changing. As retailers and wholesalers, we can’t sit back and wait for people to come to us,” Shawn said. “We’re on the cusp of this [retail trend] — and maybe ahead of the curve.”

Last week was a big one for Ferragamo. The company launched a redesign of Ferragamo.com featuring an online store with international capabilities. The new, simple layout is designed to provide an easier shopping experience and includes a section for the famed Ferragamo museum, where visitors can look through the brand’s archives and participate in interactive contests.

Additionally, the company relaunched its Houston store last week. “Houston has long been an important market in our retail chain,” said Vincent Ottomanelli, president of Ferragamo USA. “We wanted to offer our Houston clientele an inclusive Ferragamo experience, and to do that, we almost doubled the size of the store and increased the product offering.”

Though Ottomanelli declined to comment on projected shoe sales, he said that the assortment for men and women also has grown significantly for the new space.

“Across the board, we increased the shoe assortment in every lifestyle category.”