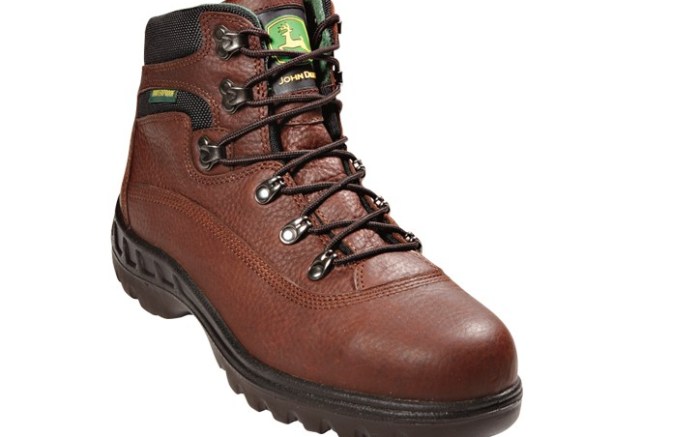 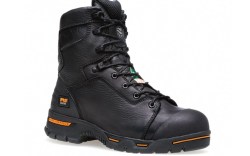 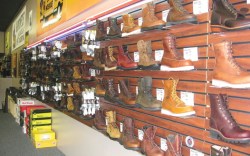 Washington is hoping its $787 billion economic stimulus package will help jump-start the U.S. economy. And with nearly $50 billion in funds to be allocated within the next year to rebuild the nation’s infrastructure, an initiative expected to create 400,000 new jobs, the workboot industry is excited that it could lead to new sales.

“I hope and pray [it happens]. It’s in the back of my mind,” said Mike Brooks, CEO of Nelsonville, Ohio-based Rocky Brands, about the positive impact the stimulus plan could have on work boot sales. “I try to find the pluses in the package — selfish pluses.” But, he admitted, “I have no idea if it will be a 1 percent or a 10 percent increase.”

Marshall Davis, marketing specialist for Rockford, Mich.-based Wolverine, also is unsure of the direct impact on sales, but he said he’s optimistic it will be a considerable one. “They are projects focused on construction jobs that typically require work footwear,” he said, noting that the labor pool will be a mix of seasoned professionals and newcomers buying their first pair of workboots.

With such a large group of workers to tap into, Red Wing Shoes in Red Wing, Minn., is aiming to lure in consumers. According to Maurice McClurg, global work marketing manager, the company will target these consumers through a new campaign, slated to kick off this summer, that will celebrate the return of workers to the job. “Red Wing is proud to support American workers returning to work under the stimulus package,” McClurg said.

While most Americans are spending less, vendors and retailers still expect workers to opt for higher-end product that delivers safety, performance and longevity. Jim O’Connor, senior director of product and marketing for Stratham, N.H.-based Timberland Pro, said that even in the current economy, the brand’s business has been trending up, with high-single-digit growth over the past several years. “In tough times, people go for something that will last, [especially] if it’s a tool for their job,” he said. For fall ’08, Timberland Pro introduced Endurance, a more premium-priced line — retailing for $130 to $170 — made up of general-use boots with anti-fatigue technology. Based on the positive reaction so far, O’Connor said the series will be expanded for fall ’09.

Better-grade footwear also has been a sweet spot for John Deere Boots. Wayne Wilson, managing director for the Clarksville, Tenn.-based company, said that in other tough times, workers traded up for work gear. “In similar economic conditions in the 1970s and late 1980s, we found that when the economy takes a dip, the worker doesn’t have [money to waste]. He has no loose change,” Wilson said. “He needs quality footwear that will get him through his work week.”

Wilson said there are still plenty of workers on job sites around the country. Unemployment, he noted, traditionally averages 4 percent. Even with the additional 3.5 percent due to recent economy-driven layoffs, roughly 93 percent of Americans are employed. “We still have people working, and they want a better product.”

Kelly Ballou, marketing manager for Rockford, Mich.-based Cat Footwear, agreed. “Guys [will be] buying one pair,” she said. “And they’re not shopping at Wal-Mart — they will be going to brands they trust and not to someone new to the market. They want footwear they can depend on for the long haul.”

Cat is known for traditional work shoes and boots for general laborers in the construction industry, but the brand will expand its offering to meet the needs of a new labor force, Ballou said. “We are going back and looking at classic steel-toe work boots and what we can do to make a better-performing and quality product.”

Retailers also are looking forward to an influx of blue-collar customers. Brian Jensen, footwear buyer for Seattle-based Worldwide Inc., a buying group co-op with a membership of 250 independent retailers focused on the work and outdoor markets, said he is optimistic about how an increased labor force will affect the industry at large. “If the work load increases and contractors have been granted their bids, [their] employees will feel more comfortable about purchasing a pair of boots,” he said. And, he added, planned roadway projects could mean multiple-pair purchases: Concrete workers, for instance, would need a pair of traditional work boots when preparing an area for concrete, and the next day would require a pair of rubber boots when pouring it.

“There’s no question the stimulus bill will generate infrastructure and construction jobs, and workers will need footwear and apparel,” said Stephen Anisdel, COO of South Bend, Ind.-based Working Person’s Store and Workingperson.com. “Companies that are specialists in these categories are well positioned to serve that need.”

According to Anisdel, his company caters to workers in the construction industry, offering higher-end footwear with features such as metatarsal guards and waterproofing. “Workers view this kind of footwear as tools,” he said. “[They’re] not buying a cheap wrench. Quality lasts longer. [Their footwear] is protecting their body, after all.”