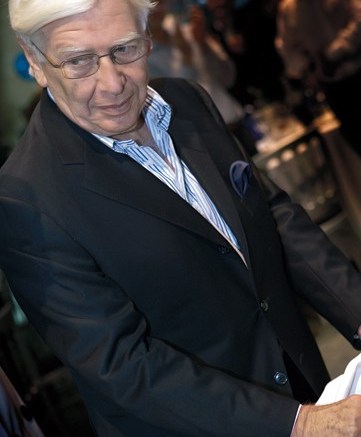 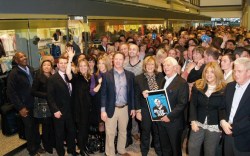 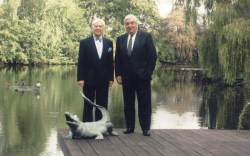 LONDON — Stephen Rubin has built one of the U.K.’s most powerful companies, but his passions extend far beyond the boardroom. This quintessential family man has made major contributions to everything from politics to law, academia to human rights.

“I’ve been trying to get out of the shoe industry my whole life,” quipped Rubin, chairman of Pentland Group.

From a young age, he had big aspirations. In 1958, Rubin graduated from University College London with a law degree. The following year, he stood for a seat in the House of Commons, in an election where Winston Churchill was the oldest candidate and he, at age 21, was the youngest. Rubin didn’t become a member of Parliament, but he remains interested in policymaking and was involved in the establishment of the UCL School of Public Policy in 1997.

A self-described Churchill “buff,” Rubin is a board member of the Churchill Institute and played an active role in the establishment of the Churchill Museum within London’s Cabinet War Rooms, the underground complex where the prime minister and his government met in 1940, as bombs rained down on London. He also helped create the British Holocaust Exhibition at London’s Imperial War Museum.

Rubin’s interests may be diverse, but footwear has been the central theme in his life. His parents, Berko and Minnie, founded women’s footwear firm Liverpool Shoe Co. in 1932. Rubin became its chairman in 1969, five years after the company went public. (In 1973, the company officially became Pentland Group.)

Pentland’s shares were once among the fastest-growing on the London Stock Exchange, fueled by its 1981 investment in Reebok International. Through that deal, Rubin turned his initial $77,500 gamble into a stake that was worth more $500 million by the late 1980s. In February 1991, Rubin engineered a two-stage divestment of Pentland’s remaining stake in the athletic brand, selling 18 percent back to Reebok for $460 million. The remaining 12.9 percent went to an investment firm for $310 million.

“With Reebok, the timing was perfect,” Rubin said. “But really, there was no way any of us could take credit for what happened, because no one ever knew what the outcome would be.” Rubin helped the brand become a pioneer in the athletic footwear business, which was in its infancy at the time.

“He’s a visionary,” said Sam Hassan, owner of The Tannery in Boston. “He created an opportunity for his company, and I admire him tremendously for it.”

While the firm prospered during much of its time as a publicly traded company, Rubin relished the opportunity to take it private again in 1999.

“As [public] companies know, every step [is] scrutinized by outside analysts. It was impossible to take a long-term view,” Rubin recalled. “Now, the emphasis is on cautious growth on a step-by-step basis, with the ability to wait for something to gradually develop rather than the board having to rush for instantaneous rewards.”

But Rubin has never been one to slow down. He spent much of his career on the road — often seeking out new sourcing frontiers.

“Many years ago, he was one of the first to have the vision to resource product from the Far East,” said David Spitz, a former owner of Kurt Geiger, founder of Shoe Studio Group and chairman of Spitz Consulting who has known Rubin for more than 30 years.

But moving around is no longer on top of Rubin’s to-do list. “I’ve spent so much of my life traveling that I’m happy to stay in one place,” he said. Although he calls London home, Rubin also enjoys an annual six-week stint stateside at his Boca Raton, Fla., home.

At 71, he is no longer involved in the day-today operations of his wide-ranging, $3 billion business, and instead cherry-picks what to focus on. However, he’s adamant that he has no intention of bowing out altogether. “Pentland is a family business, so I hope I will never have to retire,” he said.

Currently, Rubin’s professional efforts are largely focused on the venture-capital side of the business, which includes interests in a variety of non-apparel businesses, such as publishing, renal dialysis and refrigeration. Pentland made its 2006 investment in Hunter Boot through this arm of the company.

But Rubin doesn’t spend a lot of time bragging about the size of the business. He’s more proud of the fact that it’s a family-run operation. Three of his four children and a son-in-law are on the board, and Pentland won the 2008 JPMorgan/IFB award for “Best Family Business in the U.K.”

“My father has been an inspiring role model for me and my colleagues over many years,” said Andy Rubin. “His incredible energy, passion for business and desire to do the right thing have become ingrained in how we do business at Pentland.”

Rubin has long been a champion of human rights. In 1995, during his tenure as president of the World Federation of the Sporting Goods Industry, he created the Committee on Ethics and Fair Trade to address issues related to ethical business practices and social responsibility.

“Human rights is something I have always fought for,” he said, adding that today Pentland will not buy from any factory that has poor working conditions or exploits its workers in any way.

Rubin is also passionate about sports and the positive impact they can have on society. He’s already looking forward to the 2012 Olympics in London. “The greatest thing to come out of 2012 will be if [the Olympics] encourage young people to look to sport.”

Surprisingly, however, Rubin is lukewarm about the games’ effect on business — even after Pentland struck Olympic gold during the 2008 Games when Michael Phelps put its Speedo brand in the spotlight. But his love of sport — and his dedication to his employees — is visible at the company’s headquarters, hidden away in the North London suburb of Finchley.

The building boasts employee-friendly facilities, including a gym, a break room with a pool table and a restaurant, with a swimming pool soon to be built. “It’s our way of saying thank you to our staff,” Rubin said.

Sonny Shar, president and CEO of Pentland USA, said Rubin has made a big impression on his employees.

“To describe Stephen in a few words is not an easy task,” said Shar. “His contributions to business are his ability to see opportunity and his sense of timing. He is totally committed to human rights and equal opportunity. And in the area of philanthropy, ‘generous’ is not an adequate description. I have learned a great deal from him.”