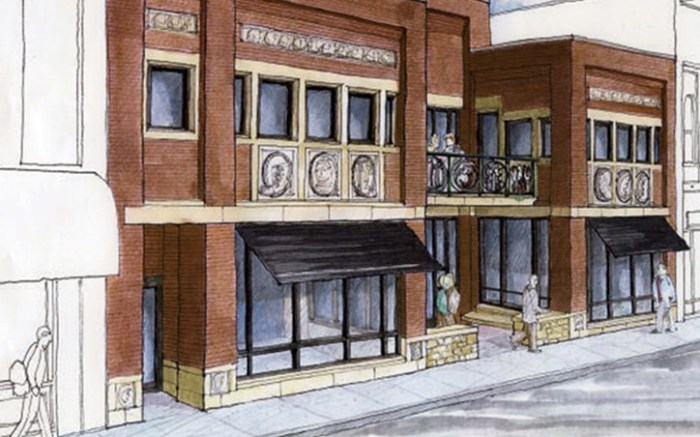 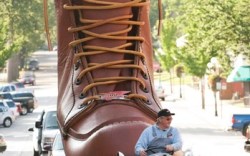 Red Wing Hits Main Street
Red Wing is going home. The company is gearing up to open a 17,800-sq.-ft. store — complete with a 4,600-sq.-ft. company museum — on Main Street in Red Wing, Minn., across the street from its corporate headquarters.

“The new store allows us to accomplish a number of objectives,” David Murphy, Red Wing president and COO, told Footwear News. “First, it creates a home for the history of our company and a means for the public to learn more about our brands and our company.” Murphy added that the firm needed a large, collective space to showcase all five of its brands: Vasque, Irish Setter, Red Wing, Carhartt and WORX.

The store, opening on Aug. 3, was designed by Stillwater, Minn.-based SALA Architects and adheres to several design guidelines, due to the historical designation of the district. The designers drew inspiration from the red brick buildings in the area, dating back to the 1800s, to create a façade with a vintage American feel.

The exterior of the store on the first and second floors features etched granite reliefs of work scenes from Red Wing’s history, including a steam locomotive engineer and loggers working in Minnesota’s white pine forests. The interior will have a rugged layout, with concrete floors and industrial fixtures and display racks.

“Since 1905, Main Street has been home to the Red Wing Shoe Co.,” said Murphy. “The new store will generate a lot of visitors — and hopefully a lot of business — for the Red Wing community. It’s very gratifying to give something back to Main Street and our hometown with this new store and museum.”

The museum will display various items from the company archives including old packaging and advertisements, an original pair of shoes from 1905 and photos of past employees and from the manufacturing process. There will also be interactive displays for children, as well as a film on “How Boots Are Made.”

In honor of its centennial and new store, the company brought 60 people on board for 13 months to create the world’s largest boot, which will be on display. Composed of 80 leather hides, the boot, size 638 1/2 is a staggering 16-feet tall, 7-feet wide and 20-feet long.

Exchange Program
Buffalo Exchange, the buy-sell-trade clothing and accessories store, is set to bow a new location in Ventura, Calif., in early August. The 3,900-sq.-ft. space is designed in a retro-beach style featuring poppy flower graphics. It will open with shoe and apparel inventory taken from stores in Las Vegas, Houston and New York. The chain counts 36 stores, including the new shop, and brings in $56.3 million in sales each year.

Back It Up
Streetwear shop FreshIn, in Sydney, Australia, has announced the opening of The Back Room, a new extension to its current retail space that focuses on special collections, premium fabrics and classic designs, the company said. The space features hard-to-find apparel and footwear lines, such as Clae sneakers. More brands are to come, said the retailer, and will be announced later this year.