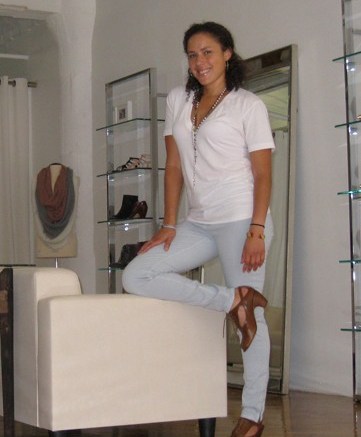 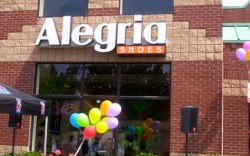 Nos to Bow in Brooklyn
After several years of retail and residential development, Brooklyn’s Dumbo is a bustling neighborhood where shoppers can find everything from a Jil Sander coat to vintage vinyl records. But the area has had no dedicated shoe store — until now.

On Sept. 1, retail veteran Racquel Nosworthy will open Nos. The 1,000-sq.-ft. store, in a former warehouse, will offer mainly women’s shoes, plus a small selection of clothing, accessories and men’s shoes.

Despite the tough times at retail, Nosworthy and her buying consultant, Jeremy Ricketts, are confident about the opening. The Dumbo area, underneath the Manhattan Bridge Overpass, already attracts Manhattan shoppers and international tourists, she said. “This is the prime spot to take pictures of the Brooklyn Bridge,” Nosworthy said.

The core customer, however, will be local consumers, added Nosworthy. “We have artists, entrepreneurs and executives here,” she said. “They like to shop where they live.” The interior of the store features high ceilings, sleek Ikea couches and a curtain that pulls back to expose a wall showing videos.

Nosworthy, 33, has held management positions at Banana Republic and Macy’s, and was most recently an account executive at DKNY. When she was laid off in 2007, she explored the world, stamping 37 countries into her passport.

Returning to DUMBO, she decided to start a new career on her own turf. A nearby clothing store offers footwear by lines like Jimmy Choo and Chloé, so Nosworthy is aiming for brands that retail between $150 and $500. “We want moderate luxury with great price points and new designers,” said Ricketts, 23, a Brooklyn native and recent college graduate who met Nosworthy when he interned at DKNY.

The two have been buying at FFANY and WSA. “I’m the good cop, Jeremy’s the bad cop,” Nosworthy said. “He’s the one who says, ‘No, we’re not putting those purple-and-yellow sneakers on our floor.’” Instead, shoppers will find boots, clogs, pumps and flats from brands including Corso Como, Rough Justice, Børn, Pour La Victoire, Velvet Angels and Sam Edelman.

Faith Hope Consolo and Joseph Aquino of Prudential Douglas Elliman brokered the deal. The store was previously a Diabless location and is approximately 662 square feet on the ground level, with 817 square feet of basement space. The store’s neighbors will include Club Monaco, True Religion and Lululemon Athletica.

The brand, which has been eyeing a Manhattan location for years, is likely to do well in the neighborhood, said Consolo.

“The shop is located near the very successful Arche that we placed in the neighborhood over 15 years ago. Thierry Rabotin picked this shop because of the vibrancy of the area and the seven-day-per-week shopper — all ages, all shapes, for all styles,” said Consolo.

Alegria Rocks Carolina
Funky comfort brand Alegria, which offers colorful looks on rocker bottoms, now has all its footwear under one roof with the debut in July of the first Alegria Shoes store.

Owned by Eric and Allison Johnson, the 3,600-sq.-ft. store is located at 684 Hanes Mall Blvd., in Winston-Salem, N.C. The store is meant to give an at-home feeling, with a large Persian rug, planters and wood tables.

Mountain Hardwear to Open in Tokyo
Richmond, Calif.-based Mountain Hardwear, the mountaineering and outdoor clothing company, announced plans on Monday to open a store in the Harajuku neighborhood in Tokyo to grow the brand identity.