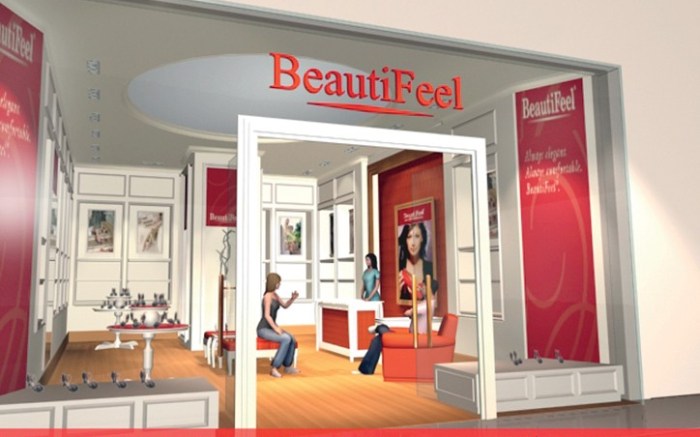 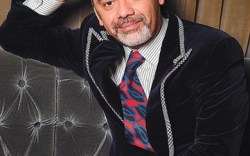 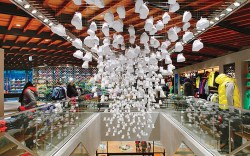 Nike has brought its signature swoosh to one of Tokyo’s trendiest neighborhoods.

On Nov. 14, the athletic brand opened a sprawling flagship in Harajuku, a district known for its cutting-edge street fashion and youthful clientele.

Jeanne Jackson, president of direct to consumer for Nike Inc., acknowledged that market conditions are tough in Japan, which technically just emerged from a recession. But, she explained, it is actually the perfect time to open stores and negotiate with landlords for the best locations.

The new store covers an area of more than 10,000 square feet over three levels. Japan-based Masamichi Katayama’s firm, Wonderwall, designed the interiors, which feature wood ceilings and floors and a generous amount of glass displays and panoramic windows.

There are also some eye-catching accents. No fewer than 400 pairs of white sneakers are suspended from the ceiling of the second floor, and a collection of race number tags revolve in a chandelier formation on the lower level.

The first floor houses the Tokyo chapter of the Nike Running Club and a high-tech gait analysis room, where runners can get feedback on their stride. Jackson said Nike purposefully chose the Tokyo store’s location on Omotesando Avenue, near sprawling Yoyogi Park, where the club will run four nights a week.

Much of the rest of the store is dedicated to customization services. On the second floor, shoppers can take advantage of Nike’s largest NikeID studio in Japan and create their own apparel and footwear using computer stations and swatches of fabric and leather. The third floor houses a “Boot Room,” where customers can individualize their own pair of soccer cleats in terms of fit, color, material, plate and embroidery.

If the Harajuku flagship is successful, Nike will consider opening other larger-scale stores in Japan, Jackson said.

Globally, the brand is evaluating locations on a case-by-case basis, rather than targeting a specific number of stores, she explained. The executive specified that the brand is planning to “refresh” its Niketown stores in New York and London while considering new locations in Los Angeles and Manchester, England.

Designer Christian Louboutin was in Tokyo earlier this month for the launch of Christian Louboutin Japan, a joint venture with Japanese company Aoi. The new outfit will handle all Japanese retail operations, including the opening of roughly 10 stores over the next four years, among them two freestanding shops.

“We felt it was very important to show a strong commitment to Japan by opening our own company here,” said Alexis Mourot, COO and GM of Christian Louboutin.

The firm’s Paris headquarters has been directly operating a wholesale business in Japan for nearly a decade, and this operation will continue to be run without change. In the past, Christian Louboutin’s products were available at about 30 points of sale across the country, but about two years ago, the company decided to streamline operations, trimming that number to 20.

The first store under the new joint venture will be a shop-in-shop at a Matsuya department store in Tokyo’s Ginza district, opening in February, followed by Japan’s first freestanding Christian Louboutin store, also in Ginza, due to open next summer. Currently, the company’s sales in Japan represent 4 percent of total sales, but this is expected to increase steadily over the coming years.

“Ginza is a very important area, and we have a good customer base here,” Mourot said. “Matsuya Ginza offered us a really prime location that we could not refuse.”

To celebrate the launch of the joint venture, the company held a private party and exhibition in Tokyo, displaying products from the upcoming spring collection, shoes from the brand’s archives and a portion of the designer’s collaboration with film director David Lynch, titled “Fetish,” which was making its first trip to Japan.

Beautifeel will debut its first U.S. store later this month, after securing a 900-sq.-ft. space in the Westfield Topanga Mall in Canoga Park, Calif.

The brand also is planning to open more stores internationally in Sydney, Paris and other capital cities next year. Israeli store designer Roy Roth will be creating the shops, marking his first shoe store concept.

“We’re not trying to get into the retail business,” said Beautifeel founder Ami Bar-Nahor. “The idea is to promote the brand, and the stores will help us understand the market. It’s a good way to test different styles and have direct contact with our end user, so we can improve our collection for our retail [partners].”

Luxury firm Harrys of London is gearing up to bow a store in the 360 Mall in Kuwait City, Kuwait, in January.

CEO Giuseppe Bonfiglio said the company has attracted a following of Middle Eastern consumers over the years.

“We have a store on South Audley Street in London, which is very populated by Middle Eastern clients, and we’ve been nurturing these clients for some time,” he said. “We’ve grown to a level where we feel very strongly about the Middle Eastern market.”

Kuwait, which has a population of about 3 million, has not been hit as hard by the current economic situation, said Bonfiglio.

Creative Director Kevin Martell said the design is much like the current Harrys of London stores, with the traditional English library feel.

Internet fashion retailer Yoox Group launched an initial public offering in Milan last Monday that could raise as much as 126 million euros, or $187.9 million at current exchange. Shares will start trading Dec. 3 on the Milan Stock Exchange STAR segment for small companies.

The e-tailer plans to use the proceeds of the IPO to consolidate its business and accelerate growth, including expanding in Asia, company founder and CEO Federico Marchetti said at a presentation Monday. In the first nine months of 2009, Yoox revenues increased 49 percent to 106.7 million euros, or $145.8 million at average exchange.