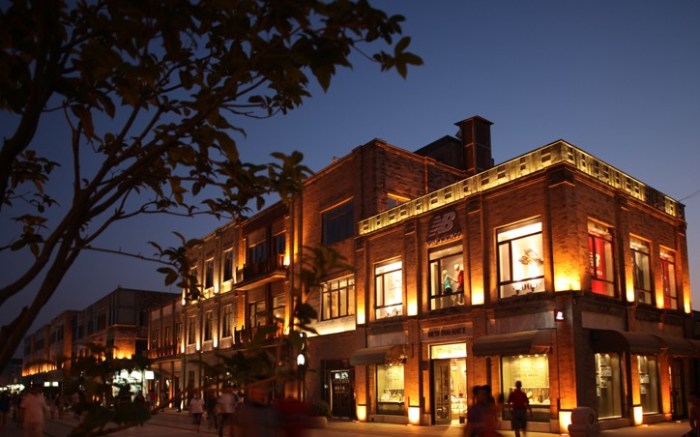 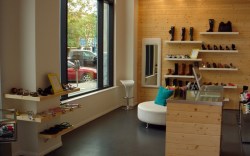 New Balance announced that the company is opening its first Experience Store in Beijing this Saturday on the historic Qianmen Avenue. The store spans more than 2,000 sq. ft. across two selling levels and pays homage to the brand’s heritage and company milestones.

The first floor draws from the brand’s vision during the 1950’s and 1960’s and features a “DNA” ribbon, which serves as a timeline of the company’s history and stretches from the entrance of the store to the second floor. The décor on the second level is more modern, featuring all of New Balance’s tech-based product offerings with a red and grey color scheme.

Additionally, the company is hosting a 1960’s-style carnival on the day of the opening along Qianmen Avenue complete with balloons, games, prizes and limited edition T-shirts.

According to North American President Nicholas Martire, the Canadian economy hasn’t been quite as hard hit as in the U.S., making for a prime opportunity for a store.

“We had one or two quarters of retraction, but it was more of a mental sentiment rather than a reality,” he said. “It was the best time to be negotiating long-term rents at good rates.”

The shoes in the 700 sq.-ft. space will be merchandised in library shelving-like units with a sliding ladder, encouraging the consumer to help herself and try on many shoes at once.

PrettyBallerinas.ca will also launch an e-commerce function early next year, and more brick-and-mortar locations are likely to roll out.

“Once we get this off the ground, we feel like each capital can support one of these stores, from Chicago to New York to Bal Harbour [Fla.] … we plan to have a roll out.”

Shoe lovers Melissa Bodnar and Jana Raskob were tired of struggling to find fashionable shoe brands in their hometown of Saskatoon, Canada. So after crafting a business plan and taking a leap of faith, the duo bowed their own store, Swank Shoe Lounge nearly two months ago. So far, the shop has been doing better than expected, Bodnar told FN.

“It’s been a dream. Our expectations have been exceeded by far. A lot of people in Saskatoon travel to buy their shoes. They’ll go to Vancouver or Montreal. We really needed a boutique here to offer what shops have available in other cities.”

The duo stock a wide range of brands including Frye, Dolce Vita, Minnetonka, Miss Sixty, Hunter and Converse by John Varvatos, and will be adding even more next season.

Terry Barkin, owner and president of Mobile, Ala.-based Shoe Station, said the company will open a new store at the end of August in the Premiere Shopping Center in Pratville, Ala. This marks the retailer’s third store in the Montgomery, Ala. region, he said. “It’s a major market for us, and Pratville is a fast-growing suburban area. And it’s a good real estate opportunity,” he said of the former Goody’s location. Barkin also cheered the Wal-Mart anchor store at the shopping center, which draws a lot of traffic. Next spring, the company plans to relocate one store and open a new location.