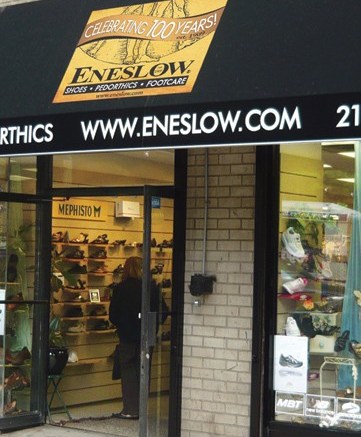 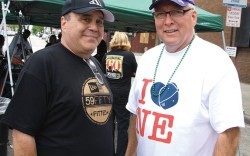 Eneslow, the New York-based comfort shoe shop, is celebrating 100 years in business with new digs. On June 10, Bob Schwartz, CEO and president of Eneslow Pedorthic Enterprises, will host the grand opening of its third store, on Second Avenue near 78th Street. Despite the challenging economic times, the opportunity to open the space made sense, explained Schwartz.

“I’ve wanted an Upper East Side location for 35 years,” he said. “In February, I got an e-mail from a broker asking me if I was interested in a prime location at below-market rent with very good terms. It was already an optimum space for a shoe store, so there wasn’t a major upfront investment, and looking at my personnel, I had at least two people I could [transfer]. The market, opportunity and timing were just right.”

On June 11-12, Eneslow will host two more centennial celebrations at its locations on Park Avenue South in Manhattan and in Little Neck, N.Y., featuring food, entertainment, prizes and a Soles4Souls donation drive.

Looking ahead, Schwartz said Eneslow could move into areas outside New York.

“We believe pedorthics is needed in more regional areas than we’re currently in,” Schwartz said. “If this [new store] turns out to be what we hope it will, then underserved populations will be considered within the context of skilled personnel availability. I have a strategy, but no clock ticking.”

Shoe City is marking 60 years with a growth push.

“We started out as a family shoe store, now we’ve got 29 stores and have evolved into a fashion, urban apparel and footwear store that completely runs the gamut of product,” said Don Heasley, COO and VP (below right, with Shoe City President Ted Greenberg).

The company has continued to expand, debuting a new location in Richmond, Va., last fall, in addition to relocating two stores. And this August, it will open a space in Brandywine Village shopping center in Waldorf, Md. Outdoor shopping centers continue to be a prime area for the retailer, said Heasley.

“Those [retail layouts] seem to work better for today’s customers’ shopping habits. People want to be able to run somewhere, get what they need and get out,” added Ted Greenberg.

Also on deck, the retailer is working to develop an e-commerce functionality to its Website, Shoecityonline.com.

“That will expand our ability to reach out to a different customer we can’t touch today,” said Greenberg.

Following the success of its first freestanding store in Seoul, South Korea, Camuto Group President Bob Galvin said international expansion is a key part of the company’s growth strategy. The Camuto Group plans to roll out additional locations throughout Asia, Europe and the Middle East. Target cities have not yet been named, but could be announced later this year.