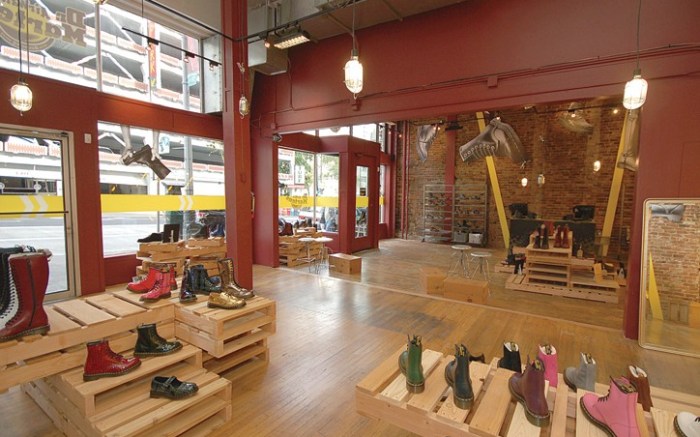 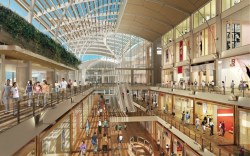 Doc Goes Pop
Dr. Martens is the latest shoe company to get in on the pop-up game.

Last week, the boot company bowed a pop-up shop in Seattle, a few blocks from Pike Place Market. The store looks much like a warehouse, with raw wooden, crate-like displays, brick walls and fluorescent industrial lighting. It offers the brand’s full line for men and women, including limited-edition product such as the Stussy Deluxe and Vintage collections.

The company plans to open pop-up stores in other cities around the country, based on the success of the temporary shop it opened in East London last month.

“The economy has led to some attractive lease options in key markets,” said Kimberly Barta, VP of marketing for Dr. Martens. “Pop-up retail allows for a direct connection and ongoing conversations with consumers. It becomes more than a store, it becomes an event space where the brand’s heritage in music, art and fashion can be linked with influencers in each city.” Barta said the store could also serve as a laboratory for testing new product.

Second Time Around
After unveiling a pop-up store at 125 Rivington St. in New York in February, Vane and Sebago are setting up shop there again. The store, which opened last Friday, features exclusive footwear for Vane from the Legendary Raw Collection of CAT Footwear, as well as Sebago’s Docksides boat shoes and classic loafers.

“[The first pop-up shop] was a tremendous success,” said Mike Wall, director of sales for Sebago. “We weren’t looking to do it again, nor did we have the agenda to, but the location came up again and it’s such a cool part of town. The Generation Y customer we’re after is right in that neighborhood.”

Wall added that the pop-up concept, located down the street from Alife Rivington Club, helps drive traffic despite consumers’ resistance to spending. “When people know it’s short-term, they want to get to the store as soon as possible,” he said. “Last time, the Vane products sold out. Those kids are looking for iconic product with a twist to it, so when this opportunity came up, we had to take it [again].”

Over the Top
The Marina Bay Sands, a luxurious resort in Singapore currently under construction, has announced a lineup of high-fashion retailers, set to open during the first half of 2010.

Louis Vuitton will bow a glass-and-steel “island” store designed to seemingly float on the water in front of the Marina Bay Sands. Guests will be able to access the store through an underwater tunnel that connects to the rest of the resort.

The Marina’s main shopping center will boast about 300 stores, including Prada, Burberry, Chanel, Yves Saint Laurent and Bally, among others.

Despite the economy, retailers are rushing to fill the space, said David Sylvester, VP of Asian retail for Las Vegas Sands Corp., which is developing the property. “Those brands believe that an integrated resort offering everything from shopping to theater and gaming to conventions will attract new customer segments to Singapore,” he said. “While the economy is showing signs of improvement around the world, we see considerable confidence from customers in Asia, and that’s where most of our customers will come from.”

Sabra Ellingson, the company’s director of operations for North and South America, said that while Terra Plana had a great retail spot on Elizabeth Street, she had been hoping to snag an even larger location. So when the 2,200-sq.-ft. space at 254 Elizabeth St. became available just two doors down, she jumped at the opportunity to move.

“All the remodeling has an eco-friendly story,” said Ellingson. “The paint is eco-friendly, we used energy-efficient lighting, even our kitchen area uses energy-efficient electronics and appliances.” Much of the space was constructed from reclaimed wood, including fallen tree stumps gathered in New Jersey.