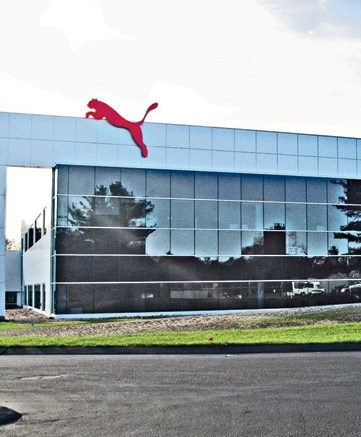 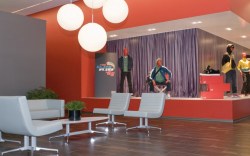 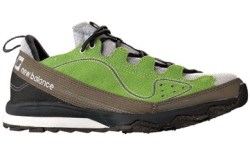 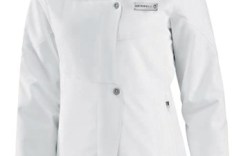 Companies looking to green up have lots of options — from a fresh building to new product to how they shoot their ads.

When Puma commissioned its new 129,000-sq.-ft. headquarters in Westford, Mass. (just down the road from its former digs), letting in the outdoors was key — and so was cutting down on waste. According to Paul Comeau, a principal at Boston-based architecture firm Spagnolo Gisness & Associates, which worked on the project, 60 new windows were cut into an existing warehouse to convert it into office space. Light tubes pipe natural light into the building, which had its official opening late last month. Outside air economizers supply 100 percent of the building’s ventilation needs using fresh air from outside, and drought-resistant plants and pervious pavers for walkways and parking lots make efficient use of the surroundings.

While getting certification from the U.S. Green Building Council or other regulatory agency isn’t top-of-mind for the company, Comeau said, making sure to create a healthy workspace with minimal impact for the 270 Puma employees on-site was key. The two-story space houses 140 offices and 20 meeting spaces, including four café areas, a fully equipped catering kitchen and a 1,500-sq.-ft. gym.

But, Comeau said, one of the most impressive features of the new space is up on the roof: a 200-kilowatt photovoltaic system (better known as solar panels) that converts sunlight into energy. The system, which is tied into the local power grid, is sufficient to power approximately 25 percent of the building’s needs when it’s running at full capacity. (Any extra energy produced is sold back to the electric company.) The net result? “When the building is occupied and sunny, the meter runs slower,” Comeau said. “And when no one’s working on holidays and weekends, the meter runs backward.”

For fall ’09, Boston-based New Balance is releasing the New Balance 70, the first in a planned series of shoes made with the athletic brand’s most sustainable materials and manufacturing techniques. The 70, a men’s and women’s lifestyle look aimed at the outdoor market, is manufactured with fewer solvents, with primarily water-based adhesives joining the upper to the sole unit. The upper, which is available in two colors, incorporates recycled polyester and is cut from a puzzle-like pattern that reduces scrap. Rice husks in the outsole replace some of the rubber, which is harder to grow and harvest. The $80 shoe will deliver to stores in July.

With Dansko’s new green-minded headquarters completed and certified (the building, which opened last summer, just received its gold-level LEED status), the company was ready to take on a new challenge. This time, the West Grove, Pa.-based firm turned its attention to its new ad campaign, shot this fall in Philadelphia in conjunction with branding agency 160 over 90. To reduce the two-day shoot’s environmental impact as much as possible, the company worked outside — eliminating the need to construct sets or rig up lighting. It also used hybrid vehicles from PhillyCarShare and public transportation to cut down on transportation emissions, and reduced waste with reusable bottles and thermoses. And although the shoes featured in the shoot were new, half the clothing worn by the three models was reused, thanks to thrift store finds. Even the paper the models folded into origami cranes for the shoot (above) was previously used. Ebeth Pittman, Dansko’s director of marketing, said the shoot was a satisfying first step for the brand. “The thought was, ‘Well, this wasn’t perfect, but it’s another way in which we’re trying to be as sustainable as possible.’” The results of the shoot just went live on Dansko’s Website, and the print and in-store spots will be on display at WSA.

This fall, Merrell is showing just how green plain white can be. In its new Nada collection, the brand, a division of Rockford, Md.-based Wolverine World Wide, has created two jackets that are produced without dyes of any sort — not in the fabrics, zippers, tags, linings or details. According to Merrell, this adds up to big benefits on the environmental side, with 1.6 kilograms of carbon dioxide, 115.2 liters of water, 0.18 kilograms of assorted chemicals and almost 2.5 kilowatt-hours of energy saved in the production of a women’s small jacket versus a conventionally dyed jacket. But it’s not all about being eco-friendly: The Nada collection is performance wear, made of 100 percent polyester, seam-sealed to be waterproof and using the brand’s proprietary Opti-Warm material in the sleeves and body to keep wearers toasty. One jacket style each for men and women (in the one colorway, of course) will be available in late August for $250 at Merrell stores and on the company’s Website, as well as at other select retailers.

For fall ’09, Vans is moving its organic program into its widely distributed Classics line — and to celebrate, all the styles (which use colorful organic cotton) will get a new green-tree Vans logo. … Wolverine showed off its new sustainable line, Grounded, at the recent Outdoor Retailer show. The men’s and women’s collection of oxfords, chukkas and ballet flats features natural latex and rice husks in the outsoles, hand-sewn grommets and Lyte leathers. … British vegan brand Beyond Skin is celebrating five years in business with a new logo and a new Website — one that promises to launch this month with a blog, charity of the month and even more pictures of shoes.