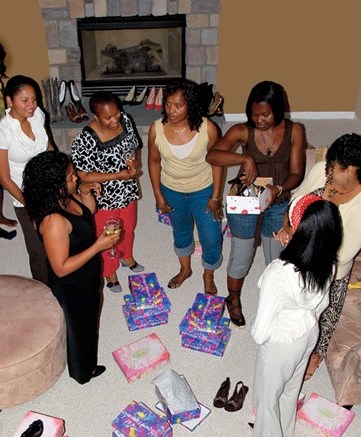 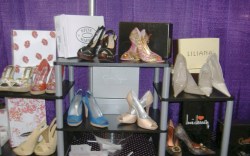 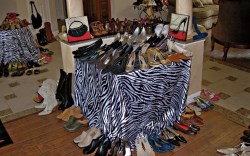 Owning a shoe shop isn’t just about having a storefront or online boutique anymore. Instead, several entrepreneurs have taken a cue from companies such as Mary Kay and Tupperware and are organizing shoe parties in lieu of opening shops, paying rent and hiring staffs.

While each company offers its own set of services — from planning every detail of an event to wardrobe consultations — all have a similar format: Footwear is carted in for a day to transform private homes into boutiques. Partygoers shop for shoes and sip cocktails with friends, while the hostess receives incentives such as shoe discounts if the party brings in several hundred dollars in sales.

It’s been a fortunate strategy for owners of shoe-party companies in a time when the dismal economy is forcing independent shops across the country to close. “I’m not at risk of filing bankruptcy, and I’m still growing,” said Kyria Jorgensen, owner of Heel Party in Salt Lake City. “I’m not sure a brick-and-mortar store would have made it through this tough time.”

Nioka Wyatt always wanted to own a business, but with an infant at home, graduate school classes and a job as a technical designer of apparel and accessories for QVC, opening a traditional brick-and-mortar store didn’t seem like the most viable option.

Instead, Wyatt decided to do something different, buying up several dozen pairs of overstocked shoes from a New Jersey distributor and renting a hotel room to showcase her wares. The gathering was a hit, Wyatt said, so she began thinking about ways to bring shoe-shopping parties to clients in their private homes, launching Soles by NioShe in April 2006. Nearly three years later, the business cushions her salary with an additional $15,000 a year.

Though she works with vendors to bring in new styles each season, there aren’t a ton of shoes at her parties. “It’s a shoe party, not a department store,” said Wyatt, who buys enough to carry between 10 and 15 styles in several sizes to each event. “It’s more personal, and there’s better customer service.” Shoes are priced between $30 and $120.

Despite the poor economy, Wyatt, who hosts parties in Philadelphia, New Jersey and Delaware, booked six more parties in the first month of 2009 compared with the same time last year and is expecting business to be up in the coming year. “It’s cheaper than going out to dinner,” she said. “Everyone can bring a dish and just shop.”

Kyria Jorgensen had long considered opening a shoe store, but the start-up costs and recurring overhead were simply too much for her to absorb. “The monthly cost was overwhelming,” she said. “I started to break it down into how many shoes I would have to sell every day just to cut it.”

Then, in late 2006, she got a call from a Mary Kay representative and the wheels started turning. “I thought, if she could do it [with makeup], why couldn’t I do it with shoes?”

It took Jorgensen nearly 10 months to build the vendor list she wanted, launching Heel Party with an open-house event in September 2007. The first party brought in nearly $1,000 in sales and a packed calendar of parties for the following months. Now, rather than focusing on just shoes — which retail for $25 to $175 — Jorgensen has added handbags and is looking into jewelry.

Jorgensen’s business peaked during her first year of business, bringing in $700 to $1,000 a month, but when the economy took a sharp dip over the summer, Jorgensen saw her sales fall, too. “A lot of people consider this a luxury, and that’s what they’ll get rid of first,” she said. Still, Jorgensen said she hasn’t been forced to offer steep discounts, instead opting to build an e-commerce site and add a selection of lower-priced footwear.

Tiffany Smith was living in New Orleans and on track to open a shoe boutique when Hurricane Katrina slammed into Louisiana. Her wedding was just months away, and everything for the event was destroyed in the storm, forcing Smith to reallocate the money she had put aside for the business. “[The storm] gave me a different perspective on business and life,” she said. “If I had owned a store, I would have lost everything in it, too.”

Less than a year later and after moving to Lafayette, La., Smith created a business plan that included wardrobe consultations and shoe parties. But during her first trip to WSA, Smith found that many vendors were cautious about working with a retailer who didn’t have a traditional store. So she picked up the brands she could and returned to the next show with sales figures and pictures from events. “They would see all the people at these parties and be amazed,” Smith said. “One by one, they would say, ‘OK, we’ll try this,’ and would start selling me smaller amounts of shoes.”

Smith’s vendor list now includes more than 100 brands, and she generally totes about 300 pairs of shoes and boots — retailing for $30 to $225 — to the parties she organizes in Houston, Atlanta and across Louisiana. Her strategy, she said, is to showcase as many single styles as possible and make clients feel they are walking away with a one-of-a-kind item. “That’s what makes it exciting and gives it a new twist,” she said.

Instead of operating a Website, Smith sends e-mail blasts to the more than 2,500 women who have attended her parties, highlighting particular styles for sale or offering tips about what outfits would pair best with certain shoes. “The whole purpose is for them to come to an event,” she said. And with profits of about $30,000 in 2008, Smith said she’s happy with the model she’s created.