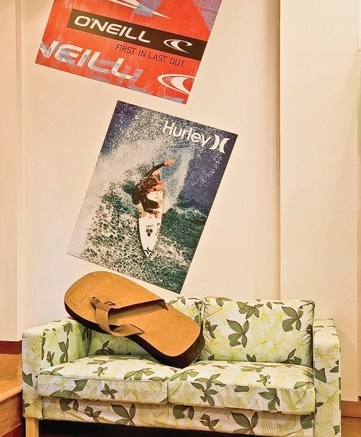 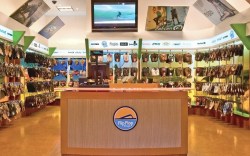 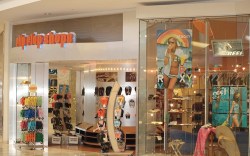 Flip Flop Shops is on a mission to free people’s feet — one pair at a time.

“We’re not interested in ever lacing up again. Jeans, shorts, flip-flops — that’s who we are,” said Brian Curin, president of the Atlanta-based company, about himself and his laidback partners. “And there are droves of people just as passionate about freeing their toes.”

Curin, who was part of the team that spearheaded ice cream chain Cold Stone Creamery’s rapid growth, first stumbled across Flip Flop Shops in an Arizona mall and was so enamored with the concept that he proposed a franchizing strategy to its co-founders, Todd Giatrelis and Sarah Towne. He then reeled in Cold Stone Creamery alum and friend Darin Kraetsch, now CEO; and COO Alan Woods, a colleague from another food company, Raving Brands.

Franchising kicked off in January 2008, and Flip Flop Shops already has three locations — in Irvine, Calif., and Chandler and Scottsdale, Ariz. — with 20 more slated to bow by the end of 2009 in cities including Vancouver, Houston, Las Vegas and Universal City, Calif. And company execs have high expectations for the concept: Plans call for 236 Flip Flop Shops within the next five years.

Flip Flop Shops offers options beyond inexpensive rubber throwaways, stocking many lines not often seen in surf shops, department stores and online resources. “No one ever did a shop before that made flip-flops the star of the show,” said Curin. “It’s like a candy store.”

Each franchisee must carry a minimum of 10 brands, drawing from a pool of 14 to 18 approved labels. Prices start at $20 and go as high as $145. “The beauty of it is that we have a relationship with the hottest brands, and it’s grown organically, mainly out of the surf industry,” said Curin, pointing to innovators such as Astrodeck, which uses the same suction-cup material on its surf pads as on the footbeds of its flip-flops. Other bestsellers include Hurley, O’Neill, Reef and pricier lines Sanuk and OluKai.

New franchisees spend a week at Flip Flop Shops’ Irvine branch, learning small business fundamentals, and sales reps visit the training sessions to educate franchisees about their specific brands. “We’re like Starbucks with baristas. We want the owners to be able to educate consumers on O’Neill, to be able to discuss OluKai,” said Curin.

The Flip Flop Shops team also determines whether prospective franchisees have the right energy and passion and whether they are charity-oriented, a key aspect of the company’s culture, as exemplified by its ongoing partnership with Soles4Souls.

“Green” is a key word for Flip Flop Shops, which prides itself on being an “environmentally responsible retailer.” The new locations in development will have smaller footprints, ranging from 500 to 900 square feet, making them more eco-friendly. The Irvine store, which opened in 2006, recently underwent a green redesign, which will serve as a prototype for future store openings. Major design elements include sustainable cork flooring, cabinetry made from particleboard, water-based paints and energy-efficient lighting.

Storeowners are encouraged to cover their personal vehicles with a branded Flip Flop Shops wrapper, as well as mail postcards and host local Soles4Souls events.

The chain also has built a cult-like following around the world through social networking sites such as Facebook, Twitter and Flickr. The company’s principals help inspire fans to share flip-flop images on Flickr by posting photos of their own flip-flop-clad feet on their Website, Flipflopshops.com. “It’s the global youth uniform,” said Curin.

In addition, Go Jimmy Go, a Hawaii-based ska-reggae band, wrote Flip Flop Shops a tribute song, which can be heard in the stores and streamed on the retailer’s site. “They dug our mentality,” Curin said.

Since debuting its store redesign, the Irvine location has had double-digit sales growth. Overall, Curin attributes Flip Flop Shops’ success to a guiltless pleasure product. “You can spend $20, $40, $60 and feel good — it’s like a mini vacation,” he said.

Still, the economic downturn has impacted bank lending, creating a challenge for franchisees who need to drum up between $165,000 and $285,000 just to get their doors open.

Ty Logan, Reef’s national sales manager for the West Coast and Rocky Mountain regions, finds that Flip Flop Shops is an ideal venue for brand exposure. “It is great to work with a partner at retail that allows Reef and the reps to place a diverse, wide and strong-selling assortment,” Logan said.

Dan McInerny, VP of sales for OluKai Premium Footwear, agreed. “Unlike most every other store in America, Flip Flop Shops dedicates its business to just sandals, and that’s at the heart of who OluKai is as a brand,” he said. Both companies, he noted, believe in educating the customer, which fosters loyalty among shoppers.

Neighborhood vibe: Flip Flop Shops targets locations in malls and lifestyle centers that are heavily trafficked by its core demographic of younger shoppers.
Customer base: About 63 percent of its customers are female, ages 15 to 34. Males make up the balance (though Flip Flop Shops also sells children’s styles). Everything from the coconut-oil scent that wafts through the space to the music selection is geared toward its target audience.

Competition: Curin said he believes that Flip Flop Shops doesn’t have any direct competition. “At any other retail space, flip-flops are an afterthought. We carry nothing but the hottest brands, the best styles,” he said.