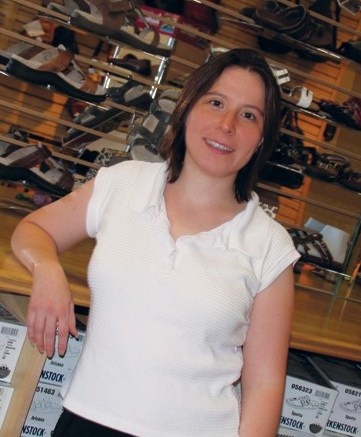 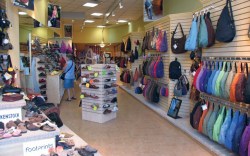 When Ameribag, creator of the Healthy Back Bag, realized its popular ergonomic totes had become a must-have accessory in comfort shoe stores, it decided to join the footwear party. The company, which operates a 1,300-sq.-ft. flagship, Ameribag Adventures, in Kingston, N.Y., took a cue from its footwear accounts and added Euro-comfort shoes from brands such as Birkenstock and Mephisto to the store’s mix. “We talked to some of our comfort [footwear vendors] about what we should do,” said Amy Ravinett, manager of retail services and co-buyer for the store.

In the two years since Ameribag Adventures introduced footwear, the category has grown to 50 percent of the store’s sales, according to Ravinett (at right). While its distinctive kidney bean-shaped bags, developed by company founders Margery and Irwin Gaffin, remain the store’s primary focus, shoes have been a welcome surprise for customers. “There is a lot of crossover,” Ravinett said. “People come for bags and say, ‘Oh, you have shoes,’ and buy them, too.”

Catering to a predominantly female clientele, Ameribag Adventures focuses on core comfort brands such as Taos, Ara, Rieker, Wolky, Sanita, Birkenstock, Footprints, Beautifeel, Tatami and French Sole. Terrasoles’ après-sport footwear is its opening price point at $30, while styles from Beautifeel, Mephisto and MBT top $200. “Taos is also very strong for us,” said Ravinett, citing popular items such as sweater clogs that retail for less than $100. “It’s a good price point and a good quality shoe.” Rounding out the assortment are SmartWool socks and Sole Custom insoles.

Although Ravinett is always on the hunt for new brands and regularly shops the WSA and Boston Shoe Travelers Association shows, she said she plans to stick with proven labels until the economy stabilizes. “I’m always on the lookout for new things, but will not bring in as much as in the past until things settle down,” she said.

The Internet may be regarded as the next frontier for many retailers, but Ameribag Adventures prefers to keep things personal when it comes to footwear. “We want to make sure people wear the right size and fit with each brand, so we tend to shy away from online orders,” Ravinett said. However, if customers who have shopped at the store before call for an additional pair, Ravinett will fill those requests knowing that they’ve already been fitted properly.

The store — which is open seven days a week, with Saturday its busiest day — is staffed by two full-time and four part-time sales associates. Because they serve a mainly local crowd of repeat customers, the staff is familiar with many of them, which creates an intimate shopping experience.

Ameribag Adventures takes a grassroots approach to marketing. In the past, the store has donated money to local groups, including Family Woodstock, an organization supporting battered women and the homeless. It also has co-sponsored community bicycle races, golf tournaments and the Woodstock Film Festival, and it advertises in area publications such as the Catskill Mountain Guide and Roll Magazine. But in light of the economy, Ravinett said, “We’re watching what we’re doing with advertising right now. We’re trying to get the biggest bang for our buck.”

She emphasized, however, that marketing remains critical for staying in touch with existing customers and cultivating new ones. The store plans to increase its mailings and offer more extras, such as 10 percent discounts and gifts with purchase. “We need to give [customers] more incentives to come in,” said Ravinett.

And although the store has quickly become a destination for Euro-comfort footwear, it’s still a relatively new category for Ameribag. “It’s a niche item for us, so we need to market it more.”

Along with down-to-earth merchandise, the store features a simple, practical design that puts the emphasis on the product. Shoes and accessories are displayed against natural-colored slat walls, making it easy for customers to explore on their own. Select styles are housed on shelves so they can be easily tried on.

Kingston, located in Ulster County, about 85 miles from New York City, draws shoppers from neighboring cities, including Albany and Poughkeepsie, as well as from parts of Connecticut. It also counts on seasonal tourists visiting the mountain region and New Yorkers with second homes in the area.

Due to the economy, however, Ravinett said traffic generated from New Yorkers has dropped off, as many are selling their vacation homes. “The economy is definitely impacting business,” she said, noting that the store saw a dip in sales of about 6 percent in 2008 compared with 2007. “Customers are watching their wallets these days — they’re concerned about spending money.”

Both Taos and Rieker have quickly become key footwear vendors for the store. “Since it is an Ameribag shop, they can only carry select shoe brands,” said Sylvia Jensen, customer service manager for Taos. “They not only chose Taos as a fresh alternative for their customers, they give us great space.”

Rieker’s business at the store has been growing substantially each season since it was picked up in fall ’06, according to Jan Brinkmann, the brand’s president. He noted that the comfort characteristics of the bags fit well with Rieker’s feel-good footwear philosophy.

Customer base: Middle-income women, age 40 to 65

Competition: Due to its comfort niche, the store has not been impacted by area retailers such as Macy’s, Famous Footwear and Payless ShoeSource. “We don’t consider them competition,” Ravinett said. “We specialize in Euro-comfort. Those stores don’t typically [carry that].”