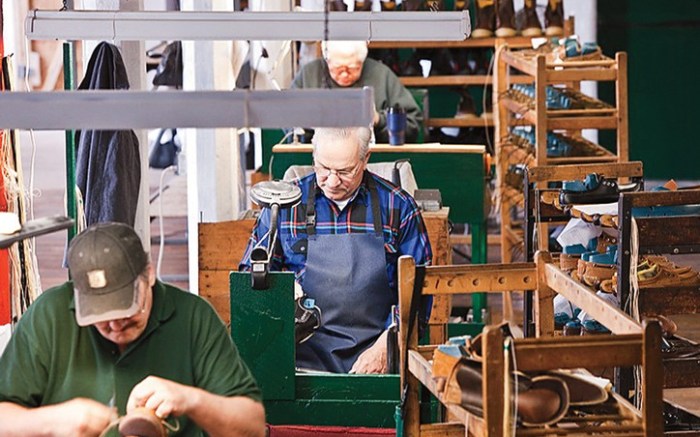 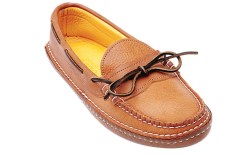 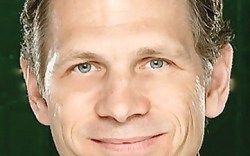 The Americana shoe trend couldn’t have come at a better time for Quoddy.

Now in its 100th year, the U.S.-made moccasin company is experiencing a renaissance with its handmade styles (which also include lace-up boots, boat shoes and oxfords, in addition to the classic moc). In fact, the company has recently added several retail accounts and has seen a boost in sales of about 100 percent for the year.

“We’ve had a lot of fortitude to keep going for that many years through thick and thin,” said John Andreliunas, president of the Perry, Maine-based brand.

Quoddy takes its name from Maine’s Passamaquoddy native tribe, which was known for crafting canoes, baskets and especially moccasins. Harry Smith Shorey, a handsewer for L.L. Bean, founded the company in 1909 to produce shoes with the same techniques — using a full leather wrap around the foot, stitched together by hand.

Over the years, though, the company has changed hands several times. R.G. Barry purchased it in 1971 as part of an effort to diversify, and it expanded Quoddy’s retail locations. But after financial problems in the early 1980s, R.G. Barry sold it to Wolverine World Wide in 1983. Then in 1987, Dunham bought 15 of its stores, as well as domestic and certain international rights. Despite some success in Japan in the 1990s, Quoddy saw a steady decline.

“The brand had basically gone fallow,” said Andreliunas. “The last company that owned it had virtually abandoned it.”

In 1998, Kevin Shorey, a descendent of the founder, acquired the struggling brand. And over the last decade, Shorey has worked to bring the company back to its original mission of manufacturing traditional, handsewn shoes. (Standalone retail locations are no longer a focus.)

“[We’ve] fallen under different brands over the years, but it started with moccasin footwear, and it’s been the same ever since,” said Andreliunas. “And there are a lot of great companies in Maine, such as L.L. Bean, that have given ‘made in Maine’ a special connotation.

“It may seem like a liability to be made in Maine, but it has become a real advantage. It differentiates us from so many other companies that have gone that other route [abroad].”

No matter how popular the brand becomes, Andreliunas said Quoddy is still a small company in terms of revenue, and will have to grow slowly. With a business model established around handwork, and with only about a dozen craftsmen, the wait time for the $200-to-$400 shoes is generally eight weeks.

Such challenges, however, haven’t stopped Quoddy from striking up collaborations with other brands for footwear. The company partnered with menswear label 3sixteen for fall ’09 and has a boat shoe and chukka planned with Canadian company Wings & Horns for spring ’10. Quoddy also makes several private-label styles for up-and-coming men’s footwear brand Yuketen, which has gained momentum lately, picking up accounts with Saks Fifth Avenue, Holt Renfrew and Barneys, among others.

Retailers have certainly caught on to Quoddy’s offerings. Freeman’s Sporting Club in New York, which focuses on rugged American-made merchandise, has been carrying the brand since the store opened in November 2006.

“From a retailer’s point of view, fit, comfort and style are most important, and if you can hit all three, then you’re going to sell shoes,” said Alex Young, manager of Freeman’s. “[Quoddy] has been very popular. They don’t really change, and that’s a selling point.”

The tradition of the brand also won over Steven Alan, owner of multiple stores bearing his name. “I like carrying a lot of old, heritage brands,” said Alan. “For me, that’s a big thing because I really believe in iconic companies that do something well. And [Quoddy] does. Also, there’s value in a handmade shoe. They’re not so cheap, but [people will pay more for something] made in the U.S.A.”

Louise Dirks, owner of Gravity Pope, with locations in Vancouver, British Columbia, and Edmonton and Calgary, Alberta, picked up Quoddy for fall ’09.

“It was a no-brainer for me because, with the upswing of the boat shoe and moccasins that are coming for fall, Quoddy has got it nailed with quality, craftsmanship and style,” she said.

And the tight margins and lack of incentives didn’t bother her either.

“I had to prepay a portion of the product,” said Dirks, “but ultimately, supporting someone local like that, who is still focused on integrity and authenticity, is a really positive thing now. It’s sad to see stuff like that move to China.”

Though no big celebrations have been planned for Quoddy’s golden anniversary, the company is happy with its evolution over the years — and where it is headed.

“The one thing I’m confident in is that [we] are delivering quality, and it’s not a passing thing,” said Andreliunas. “The business advantages, responsiveness and uniqueness [we offer] will become part of the overall market as we go forward.”