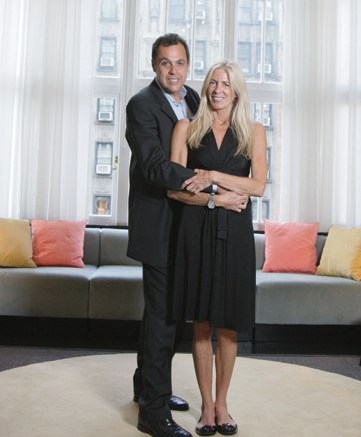 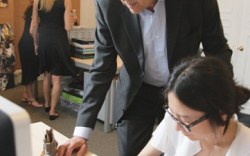 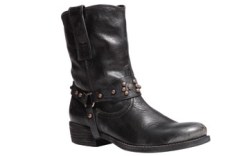 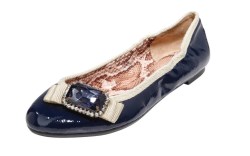 Sam Edelman is in good company.

The space housing his design studio and showroom on Manhattan’s West 57th Street is also a creative haven for some of the performance world’s most celebrated artists, including Woody Allen, Mariah Carey and Tony Bennett. Now, the shoe designer is positioning his five-year-old brand to achieve hit status in the footwear industry.

“It’s not our first time at the rodeo. We know when it’s happening, when the stars are aligning,” said Edelman, who helped launch Kenneth Cole and Esprit footwear in the 1980s and sold the Sam & Libby brand to Maxwell Shoe Co. in 1996. (The label is now owned by Jones Apparel Group.)

But he admitted that building a successful brand in the crowded footwear market isn’t easy. “We’re a little bit older, with tremendous, formidable competition,” he said.

Nevertheless, during the last five years, Edelman, along with wife and longtime business partner Libby Edelman, has managed to carve out a powerful position with a simple formula: create trend-right, moderately priced footwear. While he wouldn’t discuss revenue figures, Edelman said the duo has increased business eight times over since 2007.

Now the brand, typically priced between $100 and $250 in about 800 doors in the U.S., is gearing up for a big international push. While Edelman already has nearly 40 accounts in Europe, Asia, Central America and the Middle East, plans for expansion, including a partnership with a major European distributor, could increase his overseas sales by 500 to 600 percent.

Back at home, the Edelmans are preparing to launch a revamped marketing campaign for 2010, as well as eyeing several new categories to boost business. The spring ’09 launch of the Libby Edelman diffusion line, which retails for $49 to $99 at Famous Footwear and on the Home Shopping Network, was the first of the Sam Edelman brand extensions and is being followed with a collection of Libby Edelman handbags for spring ’10.

“Libby’s a little bit ahead of me,” Edelman said, noting they are both in talks to license swimwear, jewelry, sunglasses and handbags and have long-term plans to venture into retail, apparel, fragrance and men’s footwear. “We’d like for [Sam Edelman] to be a brand that’s whimsical with a fashion approach, and not just with footwear. … The [opportunities for] brand extensions are endless [and] very important in building the longevity of the brand and the legacy of the name.”

The boon in business has come after a 2007 agreement with St. Louis-based Brown Shoe Co., which owns a minority stake in the Sam Edelman business and has acquired an option to buy the remaining interest in the future. When asked whether he would consider selling his portion, Edelman said he is content with how things are unfolding and does not “wake up every morning thinking about our exit strategy.”

Brown, meanwhile, has embraced the Sam Edelman and Libby Edelman collections as critical components of its portfolio as it focuses on bolstering its growing list of fashion- forward brands. “[The Edelmans] are extremely talented and a real creative force and are enjoying terrific success at retail as their footwear continues to resonate with fashion savvy consumers,” said Ron Fromm, Brown chairman and CEO.

In 2008, while several of Brown’s brands saw slumping sales, Sam Edelman was a bright spot, offering sales growth during a challenging time.

The Edelmans recently sat down with Footwear News to discuss the perks of partnering with Brown, the challenges of building a brandin a tough economy and how they’re buildingthe Sam Edelman name through fresh talent and lifestyle expansions.

FN: Has your return to the industry been the way you envisioned it?
SE: I’m very humbled by the current success we’re having. It wasn’t easy. I was surprised by how difficult it was coming back in and how the business had changed. … I was starting a business at a similar time as Marc Fisher, Vince Camuto and Tory Burch. That was a bit of a surprise. The competition was not nearly as formidable [previously], and this time around there [was more]. … It makes one work harder, and in many ways, it’s better.

FN: What are some of the advantages of partnering with a company like Brown?
SE: We have access to one of the great sourcing companies in the world. As a company, Brown sources more than 75 million pairs of shoes a year. They bring sourcing expertise [and] wonderful management guidance, organizationalstrategies, planning for growth, merchandising, expertise in everything from legal to human resources.

FN: What will the long-term impact of this recession be on the industry?
SE: Other than the [Great] Depression, we’ve never seen anything like this. There will be tremendous change in terms of conspicuous consumption. It’s over, and it’s not coming back for a long time — if it ever comes back. It’s just something that’s not cool anymore. Today, value is so important to the customer, [and] we’re price-driven in the retail environment. The great designer houses are lowering their prices, but I’m not sure that’s enough.
LE: People will discover they can find great stuff at great prices. And it’s not just for Sam Edelman and Libby Edelman, even though that’s what we’re all about. It’s not that things are on sale, but that they have a great price, great fashion and great style.

FN: So does that mean you’re positioned to capture some of those customers?
SE: Our customer dreams of Christian Louboutin and such, [but] she satisfies her fashion craving with Sam Edelman or Libby Edelman. She’s so happy to buy our brands because we’re always on trend, in the top magazines and celebrities are wearing them. They’re fun, they’re comfortable and they’re always fashion right. For $100, we’re able to satisfy a craving that used to cost you $800, $900, $1,200.

FN: Why was spring ’09 the right time to launch the Libby Edelman line?
LE: We had five years of really concentrating on Sam Edelman and establishing the brand. It seemed like a great time to do it, and unbeknown [to us], the economy would take a turn. [Still], the economy hasn’t changed [the line] at all. Our whole idea was to create shoes that had fashion and style but were better priced. I guess I’d have to say it was a bit [fortuitous] in that regard.

FN: Are you targeting a different consumer with Libby Edelman?
LE: [The line] has the same kind of trends as Sam Edelman and is from the same family, but my customer isn’t as urban. She may be a little older. I talk about her as being me when my kids were younger. She’s very busy, a little crazy and not thinking about herself all the time. It’s not over the top, but it’s fun.

FN: How do you cultivate retail relationships?
SE: We believe in a grassroots approach to business. We really get into the stores, [and] it separates us from a lot of other vendors. [At Nordstrom, for example], we made six separate appearances over four weeks this spring. We sold more than 1,800 pairs of shoes [and] got to know every woman who bought a pair of shoes. We know where she works, what time she goes to bed, we know what she likes to do for exercise, her favorite music. That’s the great thing about having the team we have and having three Edelmans [including our son, Jesse] on the road — we can really talk to every woman and get to know them.
LE: We also get to know the area, which is really important. If we’re in a state that we are not normally in, we get to feel what that state is all about through the consumers we’re meeting. And it’s nice when you’re designing shoes to think of all those people you met and what they do and how they live.

FN: How have retailer demands changed in this economy?
SE: I don’t talk to too many people about their business. We just do our business. We have wonderful partnerships with retailers [and] consider them family members. If a wonderful independent can only take half a case of shoes, we’ll give them a half case. Sometimes we’ll go there on a Saturday afternoon and help them sell. There is [also] a Sam Edelman employee at Bloomingdale’s [in New York] every single day of the week for an hour. Sometimes it’s just to bring refreshments and cookies to the sellers on the floor. Sometimes it’s
to clean up the displays. Sometimes it’s to show new shoes and tell them about them.

FN: What are the advantages of running a business as a couple?
SE: One of the best things about being a husband-and-wife team is that either of us can sub in for the other. Sometimes I’ll do a presentation and lose my voice, and Libby can slip right in, or vice versa. We’ve found a way to get the best from [it]. And if anyone ever says it’s always easy, then they aren’t telling the truth. It isn’t always easy. There are times when you carry it home at night. We carry it home at night all the time, so we better have a little fun at the office or we won’t have fun at home.
LE: I used to try to say, “We’re leaving. We won’t talk any business.” But that’s ridiculous. Sometimes you can come up with the best ideas [when you’re not at work]. … I still get surprised that I’ll make a call and tell Sam about it, and he’ll say he just called that person, or we’ll e-mail someone at the same time. We have so many things that we do the same.

FN: You are both so recognizable as the face of your brands. Have you given any thought to succession?
SE: It drives me every day, and it’s probably one of the most important aspects of our partnership with Brown Shoe. The legacy of the brand, the integrity of the brand, the longevity of the brand — that means everything to us.

FN: How important is it to have younger people, including your son Jesse, working on the Sam Edelman team?
SE: There’s a great group of professionals here who have worked together, in some cases, for 30 years. But [for] about 70 percent of the company, the average age is 24. We’re teaching them and inviting them to be Edelmans. They are all learning our way of doing it, and the formula is working. Our head of marketing is 27, our head of product is 27. … These are the people who will carry on the legacy. It’s not just Jesse, [who is 26]. It’s the whole team of young people. It’s really exciting.

FN: You’ve talked a lot about building a team of young people. Who were your mentors?
SE: I have four mentors: my father, Kenneth Cole and [Esprit founders] Doug and Susie Tompkins. Every one of those people influenced me as a creative leader. My father taught me about styling and design. Kenneth taught me that there’s nothing you can’t do. Susie Tompkins taught me how to design shoes, and Doug Tompkins taught me how to market. It’s the greatest library of mentors imaginable.
LE: Growing up, it was Audrey Hepburn because of her sense of style and the humanitarian she was and became. And I would have to say Doug and Susie Tompkins, too. The vision they were able to achieve as a couple just totally inspired me. Calvin [Klein], also, because he was so focused. He has told one story and has stuck with it. He has been very consistent, from [the] home [collection] to clothing. And [lastly], Sam, because he’s taught me how to think on my feet, inspires me and makes me feel great.