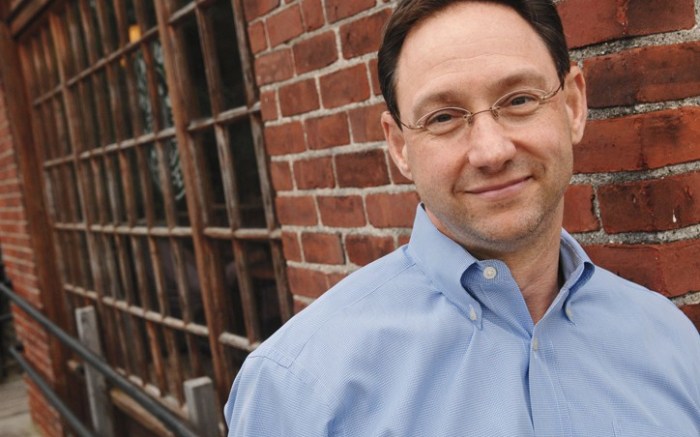 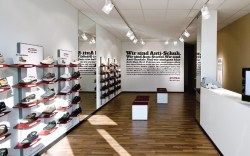 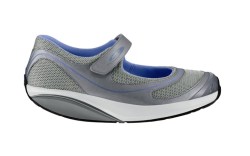 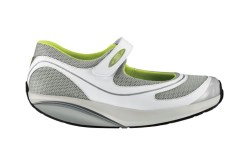 NEW YORK — Ken Pucker is on a health kick.

Since taking over as global CEO of MBT in November 2008, the former Timberland exec has immersed himself in the wellness movement. According to Pucker, he’s been handed the challenge of transforming MBT beyond a concept and into a company. “It means becoming a more reliable and capable partner,” said Pucker, acknowledging the need to boost service, including improving supply-chain management and shortening lead times.

But there’s no denying that the company is on a roll, selling 5 million pairs of shoes since the Swiss brand launched in 1996. Sales in the States have also surged, making the U.S. one of MBT’s top markets. Distribution in the U.S. is handled through the firm’s Los Angeles-based subsidiary, Masai USA Corp., which Pucker also oversees.

While MBT continues to maintain a lead position in what Pucker describes as the “healthy living” category, he admitted that the brand has been joined by a host of other players hoping to capitalize on the wellness craze, such as FitFlop, Mephisto and Skechers.

According to Pucker, the increased competition has only encouraged MBT to improve its patented Masai Barefoot Technology. “We were first at it. It’s all we do. Right now, we’re on our fourth generation of shoes, where our footwear competitors are just starting to notice the category,” he said.

The focus on innovation is paying off: Pucker anticipates double-digit growth worldwide in 2009. And despite the brutal global economy, he’s confident the company’s unique approach to footwear will encourage consumers to continue to pay prices exceeding $200.

The company aggressively markets its features and benefits through print ads, a Website and in-store materials. However, its most effective marketing tool has been connecting with consumers one-on-one. “A lot of our marketing activity is focused on trial, getting people to try the shoes, walk in them for a while and see what they think,” said Pucker. Most recently, MBT has reached out to the untapped athletic community, with athletes now embracing the shoes for conditioning and recovery purposes.

While MBT has employed an array of strategies to get the word out about the benefits of the rocker-bottom footwear — touted to do everything from alleviate back pain to burn calories — its retail partners are the key to building long-term consumer relationships, explained Pucker. “[MBT isn’t suited] for a self-service environment,” he said. “It requires selling. It requires conversation.”

At the end of the day, Pucker admitted the best form of advertisement remains a satisfied customer. “When we get consumers engaged in our product, they become incredible word-of-mouth advocates.”

FN: You were at Timberland for 15 years. How would you compare that brand to MBT?
KP: They’re both, from my perspective, companies that are product-obsessed. They’re both companies I would say are innovators — Timberland in both product and values, and MBT in value of the offer, in terms of defying convention. Both are on a mission to do something different.

FN: In terms of categories, how do you define MBT?
KP: For the layman, it’s healthy living. It’s intended for both prevention and fitness. It improves people’s lives. If you have pain, it’s to alleviate [it]. If you don’t have pain, it’s the idea of getting the benefit of focused physiological activity … increased abdominal muscle activity, back muscle activity, increased oxygen intake — [these] are all benefits.

FN: MBT has lots of health and fitness claims. Are there still nonbelievers?
KP: One of the things that differentiates MBT is our focus on our Academy [for research-and-development and training activities]. We don’t just rely on consumer testimonials. At present, we have partnerships with four different universities, all of whom are doing additional studies. Today, more than 100 studies have been done. [However], there are people who remain nonbelievers, and people who have yet to be exposed to the idea or try the shoes. We find [that the] best way to drive conversion is to get [customers] to try the shoes. That’s why a lot of our marketing activity is done at events, where we set up a tent and encourage people to try them.

FN: What kinds of grassroots events have been successful for the brand?
KP: We’ve been very successful doing it in places where athletes congregate: triathlons, marathons and cycling events such as the one we did in California this year. It’s the [U.S.] equivalent of the Tour de France. Lance Armstrong rode this year. It’s a huge event, eight days in California. We were at all the different stops [and] sold lots of shoes. But [most] important, [we] got lots of consumers to try them.

A lot of our events are in [countries] outside the U.S.: Switzerland, Germany, Austria. In Scandinavia, we set up at the entry point of a mall and got consumers to walk around in MBTs. Afterward, if they were satisfied, we drove them to a retailer [there]. The two weeks [we] did it, [there was a] 300 percent increase in sales. We also have try-test walk programs across the U.S. that are very similar.

FN: How has the product been improved since it launched 13 years ago?
KP: There are two different aesthetics: [One is] the classic, higher sole, around for about 10 years. It creates [a natural instability underfoot].The second aesthetic we call the Dual Board sole. It launched in spring ’09 to enormous success around the world. We’ve been working on it for three years. It’s a more mainstream application of the idea. It delivers the same benefits in terms of instability and is based on the same principles, but it’s more comfortable in that it’s less extreme. It has broadened our base. Now more people don’t view them as inaccessible from an aesthetic standpoint.

FN: As more players enter the market, how do you address the competition?
KP: We have patents and proven worldwide technology. We have the benefit of studies and we also have the benefit of opinion leaders all over the world who support MBT as the best concept — celebrities, athletes, doctors and physiotherapists, professional baseball players, football players, researchers, literally hundreds of people who are huge promoters of the brand, real advocates. We have seen a ton of [new competition] this spring, a lot of imitations from private-label firms [to competitors] above our price point. In the private-label space, those folks are going to make whatever they think is current that season. It’s very difficult if you’re a conventional footwear company to all of a sudden declare, “No, I’m just kidding. Convex soles and instability is the way to go.” If you’re talking about companies fully dedicated to physiological footwear, which there are a number of them where that need-based community is big — Korea, Germany — there’s room for more than one.

FN: In this economy, is MBT’s $200-plus price tag affecting sales?
KP: There are a couple of ways to look at it. One is, [MBT] versus conventional shoes. If you were to look at it that way, they are expensive. [However, compared with] multiple visits to a physiotherapist and appointments to work on your posture and/or joints, they’re very inexpensive. People view them as a value. We continue to grow at double digits. [But] the world economy is challenged. It’s an issue.

FN: What types of retailers are a good fit for the brand?
KP: The best are the ones committed to selling and fitting product. [MBT isn’t suited] for a self-service environment. It requires selling. It requires conversation. Independents are the best partners because store associates there stay a long time. Comfort-driven [retail] is a wonderful place, but not just comfort-driven. Independents in general that are able to explain and sell shoes have a natural inclination to sell up [shoes at $250]. And they prefer to sell a brand that’s underdistributed. Another great place is in partner-store environments. Right now, we’re approaching 300 [such] stores [globally]. It’s a dedicated MBT environment in partnership with a retailer, but it’s a dedicated MBT store from a consumer standpoint. We have the highest productivity in those environments. [In] Hungary, we have more than 50 stores. [Associates there] spend, on average, 15 minutes with a consumer, showing them views of what their posture and gait look like with or without MBT.

FN: Any plans to bring this retail concept to the U.S.?
KP: Yes, the experience we have around the world is transferable. Where we can find a great partner and take the knowledge we have from overseas to the U.S. is something we will be doing going forward. The idea of a dedicated space where we can educate is a good thing. It will be mostly determined by the ability to find the right partnerships. It’s not a need, it’s a desire, so I don’t have specifics on big plans or big numbers.

FN: How does distribution vary from country to country?
KP: Nontraditional distribution is part of our business model in every country. For example, the Bliss catalog in the U.S., which sells cosmetics, was one of MBT’s first partners and remains a very important [one]. They didn’t sell any other footwear when MBT went to them. We don’t think we should just try to sell shoes in traditional shoe stores. We can tell a great story in a magazine or catalog. In Italy, we sell in the finest apothecary, where salespeople [in white lab coats] wear MBT all day long. We sell in spas and pilates studios. These places are not conventional shoe stores because we want to [connect] with consumers who are principally concerned with wellness and don’t always go to shoe stores.

FN: How important are sales on your Website?
KP: We started selling online [in early May] in the U.S., the only country where we sell direct to the consumer. We have to create an environment that’s a full-price-only environment, where we sell via our own site. It’s not intended to compete or undercut our trade partners, it’s intended to build relationships and learn about customers and give them a great experience educationally with as many tools as we can.

FN: Is there room to acquire other brands in the healthy living arena?
KP: Our focus is building our own brand. We’re really just starting, even though we’re in 30 countries. We’re [now] in the process of turning MBT from a concept to a company. Our research and product focus have all been on improving the concept. But we also need to become a great company. We need to become a more reliable, better service provider to our trade partners. I don’t think we’ve been the best at that over time, but we’re focusing a ton of energy on that now. So that keeps us busy.