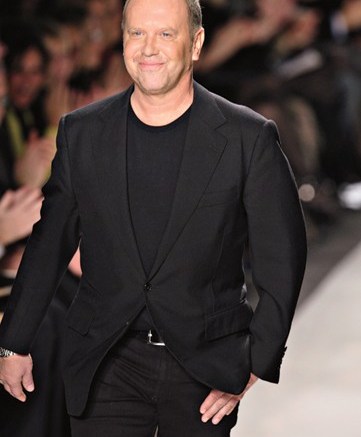 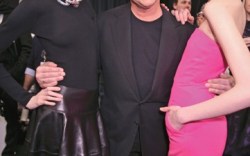 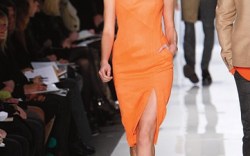 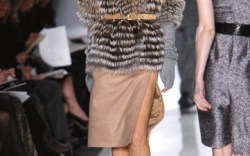 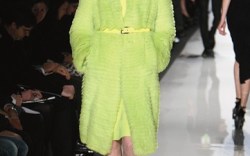 NEW YORK — On the third day of Fashion Week, 20 stories above the Bryant Park tents in his 42nd Street showroom, Michael Kors is taking a time out.

Casually dressed in jeans and a black T-shirt, the designer, who is two days away from his fall ’09 runway show, has stepped away from the model fittings and last-minute meetings to relax and talk about where his 28-year-old company is headed in the coming year.

Since launching the Michael Kors label in 1981, the Long Island, N.Y., native has built a lifestyle brand that goes far beyond its ready-to-wear roots into handbags, jewelry, home décor and, of course, shoes. The designer launched Michael Kors footwear nearly a decade ago, adding two more lines — bridge collection Kors Michael Kors and the lower-priced Michael Michael Kors — in 2002 and 2005, respectively.

Now, Kors and his team are turning up the heat on the footwear business. In November, the company announced it would end its nine-year relationship with Schwartz & Benjamin, which held the license for the bridge Kors line, in favor of bringing production in-house alongside the lower-priced Michael collection. The higher-end Michael Kors collection, meanwhile, is being created with Milan-based Iris SpA. (Iris’ parent company, Gibo, manufactures the Michael Kors ready-to-wear line.)

“Things have changed tremendously since we started in footwear,” Kors said. “Now, with everything under one roof, it’s a lot easier for us to sit here and [figure out where each footwear line] belongs and who it is appropriate for.”

While the shoe business may be undergoing big changes, Kors is determined to keep his design sensibility intact.

“So many shoes now have become jokey and ridiculous. Is that a cinder block on the heel? Oh, there’s a baby doll as the ornament on the front. It’s insane,” he said. “No one can wear them, and no one can walk in them. I’m all for a sexy and outrageous shoe, but it still has to have a reason.”

As for future projects, Kors was reluctant to comment, but did say he was sticking to fashion. “I’m not writing a book, I’m not doing food, I don’t know where Project Runway is going to be,” he said. “[But as far as shoes go], we’re so excited about having it all under one roof.”

FN: Why was the Kors bridge footwear collection brought in-house?
MK: What Michael Kors is now and what it was when we launched footwear [in 2000 is very different]. [At that time], we didn’t have the infrastructure and setup, and Schwartz & Benjamin was the perfect partner. Once we started doing the [lower-priced] Michael shoes, [which launched in-house], the infrastructure [came together in terms of] manufacturing and shipping. The design was always here, but it’s interesting when it’s all under one roof. You can get even more involved. You might have a single prototype arrive, and rather than setting up a meeting to look at 20 prototypes, you [can look at it right then]. It allows you to be really on top of it. Our handbags and shoes are so integrated into ready-to-wear. It’s better because you’re really looking at the whole picture.

FN: Why did you decide to work with Iris?
MK: They have the ability to do anything, from the most elegant shoe to the most rugged boot. A lot of factories that are high-end either make a great evening shoe or gorgeous boots, or they are loafer people or sandal people. [Iris has] the ability to let my imagination run wild, and that’s what you want [as a designer]. No one says, “That’s impossible.” Instead, [the team] says, “Sure, we’ll give it a run. We’ll give it a shot.” [There’s a python boot in the fall ’09 collection] and I wanted a riding boot but with no structure. I wanted the python to be matte and gummy, because no one wants anything ostentatious right now. They said they would see what they could do, and it was everything I wanted.

FN: Who are the major competitors for each of the footwear lines?
MK: For Kors Michael Kors, to be honest, we created the category. Bridge shoes used to be career, go-to-work pumps. There wasn’t this idea of cool-casual because casual meant cheap. Now, obviously, the category has developed, [and] it’s not so specific who your competition is. A woman who buys a Louboutin pump still buys a Kors shoe, and a girl who wears a Jessica Simpson sandal trades up for a Kors shoe.

In the [Michael Kors] collection world, it’s anything from Louboutin to Manolo to Gucci.

The Michael Michael Kors shoes are for the girl looking at [Nine West] but thinking she wants to go a little more luxurious and have more of a designer point of view. A designer shoe is still a designer shoe. I’ve seen 12-year-old girls begging their mothers, and it kills me. It’s so funny.

FN: Shoes seem to be holding up better than apparel in the recession. Do you agree?
MK: It’s one of the least expensive ways for [a woman] to update the way she looks. [Shoes] cost less than a bag, less than apparel. If she changes her shoes, it changes the whole look. Even our most expensive shoe is $900 and change. And $900 and change in designer ready-to-wear isn’t getting you much. That’s a blouse. But you put a [sexy new] pump on, and last year’s black dress looks different because this shoe has a whole new attitude.

FN: Will the luxury market change in the long run?
MK: The affluent will always want things that are made beautifully, feel luxurious, look luxurious. The difference now is that what she buys has to have longevity and versatility. [Some women had] been shopping and buying dresses that still have the tags on two years later and have shoes still in their boxes. Now she’s trying it on and asking if she can wear it more than once and thinking about how she can wear it differently. She’s a little more plugged in to her actual lifestyle. If she’s got kids at home, doesn’t go to work and is really casual, she’s going to look at a pump that’s $1,000 and [put] more thought into it.

FN: Are consumer tastes changing because of the poor economy?
MK: Fashion is a reflection of the times you live in. You’re going to sell more black shoes. But we’re not lowering prices or cutting quality. It’s going to be the H&Ms of the world that are going to have a harder time. No matter how cheap it was, it was still $60. At $60, if you wear it [only] once, that was expensive.

FN: How much has “Project Runway” played into the success of your business?
MK: We never had 12-year-olds before, that’s for sure. It stretched our audience. Now it stretches from women who are 70 and are plugged in and will wear sexy shoes in a heartbeat to the girl who is 17 and not “Barbie-girly” and wants something sophisticated. We certainly had a following [before the show], but I don’t know if everyone who walked through the mall knew Michael Kors. The interesting thing about our stores now is that she’ll walk by and say, “Oh, Michael Kors. I know who he is, but what is he really about?”

FN: Does the Michael Kors consumer cross over from one line to the other?
MK: Certainly. We find that sometimes a girl who wears Michael will spring for Kors in a shoe, in a coat or a sweater. Then, what we definitely do see, is that the rich still need throwaway things, so the $100 wellie from Michael is suddenly in the closet of a woman who has a $60,000 sable coat. [On the flip side], if you’re used to buying a bridge-level shoe and then suddenly you put on the most divine pump that’s handmade in Italy, you’re hooked. It’s tough to go back.

FN: Did you ever expect footwear to become such a big part of your brand?
MK: Honestly, no. But I still believe everything happens organically. It just grew and snowballed. For something to really happen, you have to love the product and the category, which I do, and it has to answer something that’s not out there. You can’t force it. Forcing an “it” shoe and an “it” bag is over. Our customer prides herself in being smarter than that.

FN: What are some of the perks of having your own stores?
MK: Besides controlling your own destiny, you also get to experiment. The stores are like labs. If we see [a lot of] women who shop at a certain store are shoe freaks, [we can decide] to give that store a real serious assortment of shoes, or simply the more luxurious ones. [Or I might think], “There’s a Russian girl shopping in London who might want that boot in crocodile.” So we experiment, and that’s what’s exciting about doing it yourself. Certainly no large retailer could be that flexible. It allows you to design special things, get your message out there and reach an incredibly broad range of people.

FN: Will footwear get more play in your shops going forward?
MK: We’ll refit and tweak some of our lifestyle stores, so that you will walk in and feel like you’re in more of a proper shoe salon. And that is something that’s so nice — we can have everything, from a store that carries mostly ready-to-wear to one that has mostly shoes, another with mostly bags or a mix of everything above.

FN: You’re set to open a new showroom in Milan. How will that affect your international presence?
MK: Just as retail stores really allow the consumer to see who you are, [the showroom allows retailers] to walk in and see the whole world of Michael Kors for the first time overseas. [Now we] have the opportunity to not just be the icing on the cake but the actual cake.

FN: You watched the “Project Runway” show during Fashion Week without knowing which designers’ collections you were seeing. What was that like?
MK: An anonymous [show] is interesting in a weird way, which I like. It would be a funny thing if people went to fashion shows and had no idea whose clothes they were seeing, or what the designer looked like or who they dressed. [It’s interesting when] you take away all that stuff because fashion is all about perception.

FN: So do you have any advice for young shoe designers?
MK: I would give the same advice I would to ready-to-wear designers. First, what you do has to come from you naturally. You have to really feel the look you’re going to be showing, because if you want the business to last and grow, you have to keep your own interest. You have to find something elastic enough so you can keep tweaking it and expanding it and changing it and evolving it. Whatever it is you love, it’s smart to see what’s out there and ask, “Where is the hole?” In the shoe world, a lot of people just starting out don’t realize they’re fighting for that table in the department store.

FN: What influence do you think Michelle Obama will have on style?
MK: Both the Obamas are attractive, smart people who enjoy fashion, but I don’t think they are fashionistas. Jackie [Kennedy] was a fashionista. It was definitely her hobby, [but] there’s so much more to [Michelle Obama] — more substance and depth — than turning her into a fashion icon or celebrity. Her influence is that she’s a modern woman in a very public role. She wears flat boots out to dinner, has kids, went to Harvard and goes barelegged with a dress.