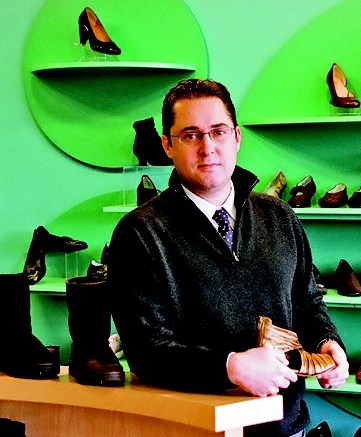 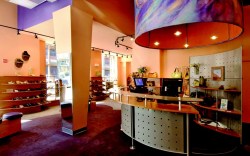 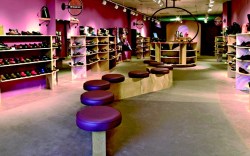 John Holden took a part-time job at Benjamin Lovell Shoes 20 years ago. Now he’s running the show. In 2006, founder Benjamin Lovell decided to take a step back from the daily operations of his Philadelphia-based fashion-comfort chain and handed over the reins to Holden, who serves as GMM and buyer.

Lovell said Holden was the natural successor. “[John] is the public face of Benjamin Lovell Shoes in the market,” Lovell said. “We have worked together for so long, and not only does John have a very good eye for commercial footwear, he has a good eye for the specialty items that will make an otherwise core comfort store pop.”

When given the opportunity to lead, Holden felt well prepared for the challenge. “One of the reasons I’ve been with Ben for so long is that he’s always given me a lot of responsibility,” said Holden, who oversees six stores in four states. “Most of our vendors have known that for years.”

Although he is steering the business amid a challenging time — comp sales are down 22 percent — Holden said he expects Benjamin Lovell Shoes’ 20-year track record to serve as an advantage in the tough months to come. “There’s a huge difference between managing a growth business as opposed to a mature business in a slow economy,” he said. “But you can make a lot more mistakes when things are stagnant or soft. So you have to be very careful in every little move you make now. Whereas before, we were opening stores every other year and getting good growth — we were moving so fast. It wasn’t as difficult as it is now.”

Holden spoke with Footwear News about the lessons he’s learned from Lovell and weighs in on the biggest issues facing the comfort business today.

FN: How do you define Benjamin Lovell Shoes?

JH: If you had to put one label on it: fashion-comfort. That’s always been our niche and it’s paid the bills. I can remember when I started with Ben that he never wanted to be pigeonholed as a comfort retailer. [His stores] always had a different look to them. [It was] the layout of the stores — they always had a funky edge. We got into the [fashion side of] the business by accident. Ben bought the Via Spiga line so we could put it in the window to let women know we carried women’s shoes, too. Because some of the women’s [comfort] shoes back then, you couldn’t tell if they were men’s or women’s. Since then, we’ve carried [fashion] brands like Donald Pliner, Stuart Weitzman and Anyi Lu. We’ve evolved into much more than just comfort. But at the end of the day, our top 10 brands are comfort.

FN: How is the product mix divided between comfort and fashion?

JH: The stores may look 50-50, but when it comes down to numbers it’s about 75 percent comfort and 25 percent fashion. Especially these days, now that things are a little tougher, I’m not as flamboyant with my [buying] as I’ve been in the past.

FN: The comfort retail business is very competitive. How does Benjamin Lovell differentiate itself?

JH: Every season I bring in a handful of new brands. And it might be only one shoe from [a brand]. For spring [we brought in] Gee WaWa — I think it’s really fresh. I picked up Fly London and Groundhog [for fall ’08]. I brought in one shoe from Fly London and I just reordered and reordered every week. To me, that’s what it’s all about. That’s why our customers come to our stores. They can go to a lot of places and buy a Dansko or a Mephisto, but they may not find two or three brands they’ve never seen.

FN: As a full-service retailer, do you think you have an edge over e-tailers?

JH: Not that much. I could go home tonight and order 10 pairs of shoes and keep one, or send them all back for free. What gives us the edge is having good service and fun people in the store. We have great salespeople, but they’re not what you might call seasoned professionals. We tend to hire people who are interesting and like to talk to customers. That’s what draws people to the store. We’re still full service — we’ll sit down and measure feet and do all the necessary things — but we do it with a little more personality.

FN: How is your customer base split between women and men?

JH: Seventy-five percent women, 25 percent men. And if you boil it down, our best customer is probably a female between the ages of 40 and 50. It definitely varies within the six stores, but that’s where our best business is done.

FN: What are men looking for these days when it comes to their shoes?

JH: No one’s been talking about guys in a long time. That’s one thing I hope comes around again, because it’s way overdue. Since Tsubo five years ago, there hasn’t really been anything that meaningful in men’s. I did bring in a new line this year, Ryan Rowe, and we had some success with it. The shoes are fresh, a little different. But it’s time for the men’s business to open up big time.

FN: Do you have a celebrity clientele?

JH: At some of our suburban stores we get a lot of athletes, a lot of Phillies. At our store on South Street [in Philadelphia] we get a lot of musicians — everyone from The Kinks to Chrissie Hynde. Allen Iverson comes in, and also Will Smith. There’s a long list. Almost every weekend at South Street somebody is in there who’s playing next door in one of the theaters or clubs.

FN: How has the fluctuating euro-dollar exchange rate impacted business?

JH: Next to the slow economy, it’s had the biggest impact. It has changed and will probably continue to change our selection and what brands we carry, especially in fashion. We have an educated customer. They pick up a shoe they know should be $195 and all of a sudden it’s $295. They’re not getting anything extra out of it, and they know that. So the [euro] situation has definitely hurt us. But now that the dollar is getting stronger and fuel costs are coming down, we will see some better pricing.

FN: Which retailers do you compare product and business notes with?

JH: The easy one is Danny [Wasserman] of Tip Top Shoes in New York. We talk a lot. Also the guys from Littles [in Pittsburgh]: Joel [Sigal] and Rocco [Procida]. As far as the West Coast, I always try to keep some contacts out there, but it’s been a while. For the most part, it’s guys on the East Coast that I tend to communicate with.

FN: What is your take on the future of WSA?

JH: I don’t know how many times I heard at [FFANY in December], and talking with people on the phone, that the WSA show is done. But the thing I like about WSA, especially when it comes to the comfort business, is that there’s nowhere else to go. The comfort business under one roof is still a big benefit. If it wasn’t for that, though, I could probably pass up WSA in favor of shows like Sole Commerce. I don’t necessarily need to go to the [Suites at the] Venetian during WSA, but you can’t see comfort — which is the bulk of our business — at FFANY. [Comfort vendors] are all over the place, if they show at all. The nice thing about WSA is that you can go to the Sands [Expo and Convention Center] and walk the floor and within a day see the whole picture.

FN: What will be the hot-ticket item for fall?

JH: I think it’s going to be Ugg once again. Even if our Ugg sales dropped 20 percent, it’s still an incredible business. Even if we match [2008] sales, I will be delighted. I have been through Dr. Martens, Birkenstock and Crocs, but nothing has ever been like Ugg or will be again.

FN: What are the most important retail lessons you’ve learned from Ben?