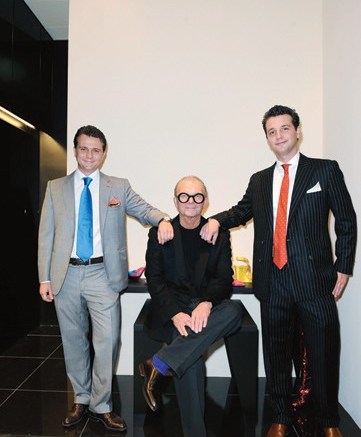 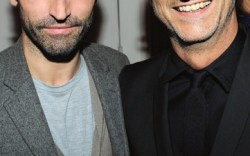 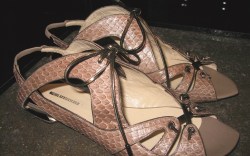 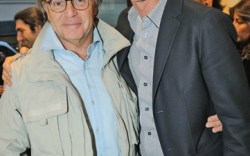 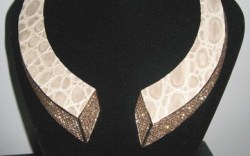 Bruno Frisoni and Pierre Hardy helped heat up the Paris party scene with a pair of packed 10-year anniversary bashes during the collections. At Bruno Frisoni, hundreds of guests sipped champagne outside his boutique as the designer made the rounds with his Roger Vivier boss, Tod’s CEO Diego Della Valle. “I’m here to support my players,” Della Valle said. “It’s [Sunday], a holiday for me, and I live around the corner.” Frisoni reminisced about styles from past collections, which adorned the windows of the boutique. “You can see that every season there are new ideas, but the spirit is the same.” A night earlier, guests, including Nicholas Ghesquière and a score of editors fêted Pierre Hardy’s milestone at his candlelit Marais showroom. “I can’t believe it has been 10 years,” exclaimed the designer between posing for photos with well-wishers.

“This has been a dream of mine since I was young,” said a beaming Walter Steiger about his new made-to-measure boutique in Paris — Steiger Bottier — which was unveiled at a cocktail party last week. “When my sons [Paul and Giulio] got into the business, I realized we could finally make this happen.” The space, located on Avenue Matignon near the designer’s Paris shop, features a expansive salon where measurements are taken and customers try on shoes. In an adjacent workshop, two experienced shoemakers (Steiger said he won’t hire anyone with less than a decade of experience) toil behind a large window looking out on the avenue, constructing each pair by hand. “We want to make the best shoes in the world here,” Steiger said. “People are willing to pay for the best.”

Nicholas Kirkwood, jewelry designer? Well, at least for the moment. For spring, Kirkwood, along with Zaha Hadid, Matthew Williamson and Jason Wu, teamed up with Swarovski for Atelier Swarovski, a partnership between the crystal purveyor and designers. Kirkwood’s collection of architectural rings, necklaces, cuffs and earrings was on display at Door Studios, alongside his new footwear offering. “It’s a very similar sensibility to designing heels,” Kirkwood said of the jewelry venture. “It’s a lot about looking at shapes and forms and [figuring out] how to translate them.” The designer also is entering new territory with his spring footwear. He introduced flats and varied heel heights, in addition to his now-signature platforms. Speaking of trying new things, Kirkwood said he is ready to tackle sunglasses, bags and men’s shoes. “Hopefully, I can do men’s for next season,” Kirkwood said. “But I’ve been saying that for years.”

Groupe Royer loves a good comeback story. After the French footwear giant relaunched Stephane Kélian at the March edition of Premiere Classe, it made a splash this season with Charles Jourdan, which will be reintroduced to the French market for spring ’10. Alexandra Neel, who is designing the collection, said she is excited about the new project. “Charles Jourdan was one of the most important women’s shoe brands in the 1970s and 1980s,” Neel said. “Being able to give a second birth to Jourdan is a great opportunity.” Neel added that she was already working with Groupe Royer on a new retail concept that will be incorporated into Jourdan’s existing stores across France. A Groupe Royer rep stressed that the company’s made-in-France collection is completely separate from the U.S. Charles Jourdan product, launched this year as part of a partnership between BBC International and Titan Industries. Groupe Royer is also building buzz with its revival of the Patrick Cox label, which was shown in New York last month.

Reinvention was a theme of the spring Roger Vivier collection, designed by Bruno Frisoni. The designer offered creative takes on the brand’s iconic buckle, such as rectangular cutouts and a miniature leather-covered buckle, both of which abounded on new rubber-soled flats, espadrille wedges and thong sandals. Frisoni said the “it” bag will be the Carla, named after France’s first lady, Carla Bruni Sarkozy, who has worn the leather and pony envelope purse. Frisoni also focused on reinventing the lower, all-day heel. “This season is about the strong, feminine woman, not about a girl,” said the designer. “I was more respectful of ecology, thinking of natural things, such as wild prints together — pony, zebra and croc. The color palette is also based on nature, with dashes of cobalt, ochre, white and, of course, tomato because red is Vivier.” For evening, Frisoni created what he calls a “Bollywood fantasy,” featuring embroidery on metallic leather. Sculptural jewelry was also a centerpiece of the line, including wooden ankle bangles and neck collars. Frisoni mused, “I can see [women] in the sand with no shoes, but only the bangles.”