New Balance in the Lab 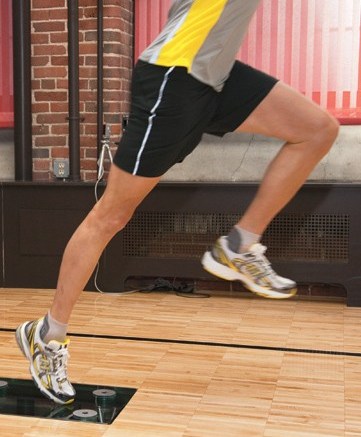 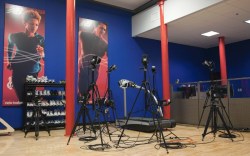 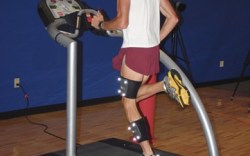 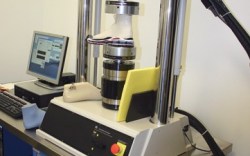 New Balance is heading back to the lab.

Shortly after taking over as CEO of the company two years ago, Rob DeMartini told his team he wanted to build an in-house research lab at the company’s office and manufacturing facility in Lawrence, Mass. (In addition to studies carried out in the U.K. and Japan, New Balance has maintained a 15-year partnership with the University of Massachusetts, Amherst Biomechanics Laboratory.) “We wanted one space where we could organize and perform any research,” said Sean Murphy, New Balance’s advanced products engineering manager.

The New Balance Sports Research Lab was officially unveiled last September. Since then, under the direction of Trampas TenBroek, a doctorate student at the University of Massachusetts, Amherst, the lab has been measuring shoe and apparel performance, doing research and gathering feedback about the end-user’s experience.

“Having our new lab housed in the same building as our research, design and development center, as well as one of our manufacturing facilities, allows for resource, time and cost efficiencies,” DeMartini said. “Running, fitness and wellness are the essence of our brand, and the Sports Research Lab gives us the ability to bring this to life.”

According to Murphy, he and his team had been given “a blank check” to equip and repurpose the lab — although New Balance declined to release the final price tag. The goal was to make the 3,000-sq.-ft. space as flexible as possible. To that end, the company built a 120-foot-long hardwood runway to test sprinting and jogging, and a 30-foot-by-30-foot basketball court. A transparent force plate measures the forces an athlete is exerting on the ground and allows for photos or videos to be shot from underneath — what TenBroek calls a “beautiful feature for footwear.”

The lab also houses a custom-constructed, aluminum-belted treadmill surrounded by eight high-speed motion cameras that can shoot with a precision that lets researchers measure multiple variables, such as midsole compression or a runner’s pronation, down to 0.5 millimeters. In-shoe midsoles that measure pressure and transmit data to computers and sensors to gauge temperature also are in the toolkit. And because sports do not always take place in clinical conditions, both the treadmill and runway are built to allow varied surfaces — turf, asphalt or rocky terrain — to be bolted on and studied.

The other component of the space is what Murphy affectionately called the “Smash Lab.” Here, a Mini Bionix hydraulic machine can be fitted with a last from the company’s rapid prototyping machine to replicate the size, shape and angle of a given runner moving at a given speed. A shoe can be literally put through its paces, replicating the wear and tear on a midsole or an outsole.

But one of the most important functions of the lab, Murphy said, is as a communications tool for the company’s designers, athletes and consumers.

Soon after the lab opened, for example, New Balance athlete and half-marathon champion James Carney spent time running over the force plate. The data the lab collected was fed directly into the Mini Bionix machine to replicate the runner’s stride and impact, letting them test product for his specific needs — and hopefully, they said, create more calibrated product. Even more recently, TenBroek said, ultra trail runners from New Balance’s outdoor team worked with the in-shoe pressure sensors and motion capture system as part of an effort to develop better trail shoes.

In fact, Murphy said, since opening, the lab has been busy not only with its scheduled tests but with drop-in visits from product developers in the building, who bring in prototypes to get immediate feedback about the shoes they’re creating. And shoes that are assembled or manufactured in Lawrence can be pulled right off the line for a test run.

“We’re a little overwhelmed,” Murphy said with a laugh about the many products that come through the doors that are “not really scheduled” to be tested. The lab also is looking ahead to working on publishable, long-term research on the effects of running shoes on runners and on gender differences in footwear. It also hopes to survey athletes of all stripes about shoe fit and feel.

But the staff agreed their main purpose will still be to help designers improve their product. And now, TenBroek said, when people have questions, “we have the equipment and hopefully the manpower to answer them.”

For retailers, the lab makes a great selling point. Stephanie Blozy, owner of Fleet Feet Hartford in West Hartford, Conn., visited the new facilities and said she’s been telling her shoppers about the work the company puts into its shoes. And Blozy said she was excited to see the product that came out of the new efforts. “There are lots of little [potential] tweaks that can have major biomechanical ramifications,” she said. It’s something she believes her customers appreciate as well. “This is science in action. It’s really impressive to see a shoe company invest [this kind of] money so its research and design can be better.”