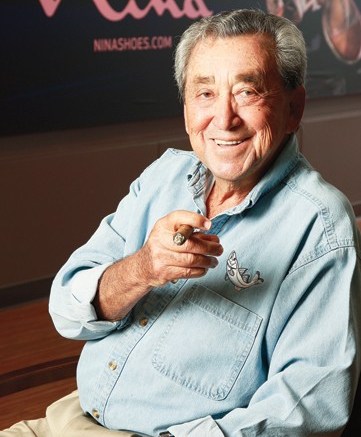 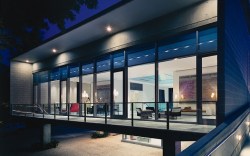 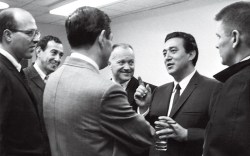 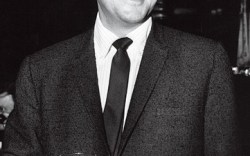 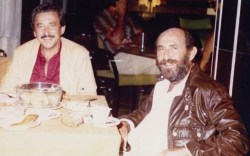 Mike Silverstein’s Florida retreat is not your typical retirement home.

The Nina co-founder, now 83, has been enjoying his one-of-a-kind Modernist mansion on the barrier island of Casey Key, near Sarasota, since 1996.

“The house was done by architect Toshiko Mori,” says Silverstein in his New York office, as he turns the pages of a design magazine featuring his abode. While flipping through the interior shots, he points out favorite items. “This is a Jean Royere lamp, this is a Maria Pergay, and this a Philippe Starck from the first hotel that he built.” Twentieth century design has long been a passion for Silverstein and his wife, Renee, who both travel the world searching for unique pieces to add to their collection.

Silverstein estimates that he owns 400 to 500 pieces of art, with a particular emphasis on Mid-Century modern furnishings. “Over time you refine your taste, and you learn,” he says of collecting. “It’s funny. My wife and I do not agree on anything, but when it comes to buying a home or buying a piece of art, she will turn to me or I will turn to her and we will say ‘yes.’ It’s automatic.”

Some of that collection is on display in Nina’s New York headquarters. Though he has been retired for 15 years, Silverstein still maintains an office there, just down the hall from his son Scott, who is now CEO. The elder Silverstein’s office is part gallery, with several commissioned artworks adorning the walls and tabletops.

“This piece here,” he says, gesturing to a sculptural shoe collage, “gives you the whole story of what the shoe business was like in the late 1950s and early ’60s. That clog became a classic in the business. A shoe that everyone’s trying to revive is that Oxford there. That boot was called the Jester, and this boot was the first lace-up boot we made, called the Dazzle.”

Silverstein co-founded Nina in 1953 with his brother Stanley, and together the two built a footwear empire. Mike served as the business and sales head, while Stanley helmed design and manufacturing.

“We were born in the shoe business,” says Silverstein. “My father was a shoemaker in Poland, and his father before him made leather uppers. He was a leather artisan.”

Like many European Jews, the Silversteins emigrated in the 1920s to Cuba, where Mike was born. Eventually, his father, Max, moved the family to New York, where he opened a small shoe factory on the Lower East Side.

As young adults, Mike and Stanley teamed up to revive their father’s clog-style platforms, which had been popular in Cuba. They named their enterprise Nina Footwear, after Stanley’s first daughter. “Most of our early business was young casuals. The evening shoes came later,” says Silverstein.

The brothers spent the next four decades growing the business and tapping into emerging sourcing areas.

When forced to close Nina’s original factory in New York’s Greenwich Village, they moved to Long Island City, Queens, and later to Italy and Spain. “Spain became famous for kidskin, so we started doing a lot of dressy shoes. It was a total fluke and didn’t have anything to do with a business plan.”

Later, Silverstein was one of the first to manufacture in China at the suggestion of Chinese Laundry chief Bob Goldman. “Bob convinced me to give him a couple of samples, and he came back with a price. It was 75 percent cheaper than what we paid in Spain. So that’s how we got started there, and eventually I got involved with the factories. One thing led to another, and we had a very successful operation.”

Beyond his sourcing prowess, Silverstein was known for his animated sales presentations at FFANY, which packed crowds of buyers into the penthouse at the Hilton New York. “I enjoyed the show business [aspect],” Silverstein says. “I’ve always been a ham.”

But, he insists, his popularity at show time had to do more with the message than the presentation. “People didn’t come to listen to me because I entertained them, they came because they walked out smarter. They knew what to do. I gave them a reason to buy something.” (Silverstein was known to tell buyers, “If you don’t buy these shoes, you’re making the mistake of a lifetime!”)

Dick Jacobson, a former Nina EVP, remembered those heady days at the Hilton.

“Mike was a fabulous financial and merchandising man, and he’s very famous for shoe shows,” said Jacobson, who went on to start FFANY, where Silverstein was a board member for 10 years. “He was rather off-the-cuff and sometimes off-color.”

“He created his own unique style within the industry — no one could ever, and perhaps should never try, to merchandise, present and sell shoes as he did,” said the younger Silverstein, who also noted that his father “showed us the importance of creativity and gave us the courage to go our own way on the path to success in the fashion business.”

Today, Scott heads up the company, while his brother Neil is a divisional president at the firm. Yet the elder Silverstein actually advised his children against following in his professional footsteps. “But they want to be like their father, and they are successful. I don’t have any problem with [their decisions],” he says.

While the family has owned Nina for more than half a century, running the business hasn’t always been easy.

“It can be very difficult for businesses to survive families,” says Silverstein, who tried unsuccessfully to sell the company three times during his tenure. “It’s unusual that it has lasted this long.”

After his second heart surgery in 1994, Silverstein decided it was time to hand over the reins to Scott, who, at the time, had been with the company for more than 10 years. “I had trained him in every angle of the business that could be trained. And it wasn’t easier for him [as my son],” says the elder Silverstein. His philosophy meant giving his son “the toughest, dirtiest jobs of all, and if he survived it, I would give him the next toughest. It was the way to break him in.”

But for Silverstein, leaving wasn’t easy. “Was it hard in the beginning? Yes. But I believe in what I say. There can only be one boss.”

Before retiring to Florida in 1996, he was a board member of the Mount Sinai Heart Research Foundation and president of the co-op board of the historical 828 Fifth Avenue. (Mike and Renee owned the parlor-floor apartment of the 19th-century mansion from 1984 to 1994. Their Manhattan home housed a vast art deco collection that was auctioned by Sotheby’s when the couple relocated to Casey Key.)

Today, Silverstein puts his executive skills to good use in his Sarasota-area community. “I am very much involved in politics. Another Cuban buddy in Casey Key and I were big sponsors of Governor [Charlie] Crist.” He is also a staunch supporter of U.S. Representative Vern Buchanan (R-Fla.).

Silverstein has gotten involved in the political game himself as the chairman of zoning and government relations in Casey Key. “I’m the one who works with all the commissioners and the mayor of Sarasota,” he says as he packs up his briefcase to head to another meeting. “So that keeps me quite busy.” In addition, Silverstein has served on the board of directors for the Sarasota Film Festival, the Asolo Repertory Theatre and the Sarasota Orchestra. He and Renee also enjoy traveling, attending the opera and spending time with their four children and 12 grandchildren.

And Silverstein says he is no longer defined by Nina Footwear. “I quit while I was still young enough. And while I resented not being the boss, I was able to do many other things in my life.”