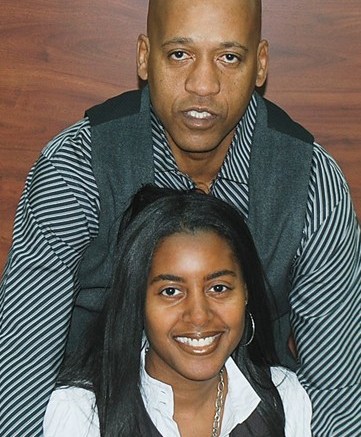 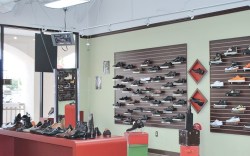 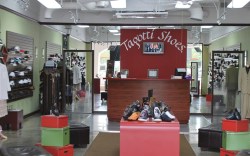 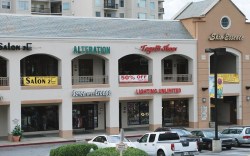 When Atlantans Ali and Shina Hasan were looking to embark on a new career path, the husband and wife decided to open a shoe store. Because both had expertise in the men’s arena — Shina is a 13-year veteran of the men’s specialty retail business, while husband Ali owned a barbershop — catering the store to an all-male audience seemed a natural fit. The couple bowed their 1,200-sq.-ft. shop in Atlanta’s affluent Buckhead area in late 2007, aptly naming it Tagotti Shoes (“tagotti” is Italian for “new beginning”).

For Ali Hasan, an admitted shoe lover, the store is an opportunity to bring men, an often-overlooked group for footwear, a destination dedicated to them. “Men love shoes just like women do and need their own space,” he said.

The couple took their men’s concept one step further and decided to specialize in extended sizes up to 18. “We get a lot of big guys who want nice shoes,” said Hasan about this niche market. “We have quality, good-looking shoes for the everyday man.”

While the store serves a local clientele, Tagotti also is becoming a magnet for traveling professional athletes who wear larger sizes. “It was a decision from day one [to go after this business],” said Hasan, whose former barbershop customers included sports figures such as Joe Johnson and Steve Smith of the Atlanta Hawks.

Tagotti offers fashion-forward casual and dress looks from Cole Haan, Kenneth Cole, Mark Nason and others, with 70 percent of sales done in sizes 14 and 15. Sneakers are also part of the mix, from brands such as Puma Black Label, PF Flyers and Lacoste. In addition, the store stocks a selection of edgier Italian lines, including Stefano Castelli, Doucal’s and Roberto Guerrini. Prices, which range from $55 for PF Flyers sneakers to $1,200 for Mauri boots, are designed to fit every budget. “We have high-fashion to conservative dress looks,” said Ali Hasan, noting that a broad offering appeals to Buckhead’s diverse shoppers, who include businessmen and the hip-hop crowd. “We cover all areas, including golf shoes by Callaway.”

As the store’s only staffers, the Hasans typically close by 7 p.m. each evening, but not at the expense of a few good sales. “We’ll stick around even if it’s a beautiful evening,” said Hasan, noting that the store gets walk-in traffic from neighboring restaurants. Tagotti also stays open for any customer who can’t shop during normal business hours.

Always on-site, the owners know their clientele personally. They routinely send thank-you notes after a customer’s first visit and send e-mails when new merchandise arrives that might interest a particular customer.

The store’s contemporary décor features an exposed ceiling and concrete floors, with shoes displayed on tables and slat wall displays. Mirrors suspended from the ceiling allow customers to easily see themselves in the shoes. For added atmosphere, TV monitors play a commercial the Hasans ran on ESPN and TNT during the 2009 NBA Playoffs.

When it comes to promoting the business, “you have to be aggressive in this market,” stressed Hasan. A key marketing initiative for the store is partnering with fellow retailers. “We go to boutiques and try to do joint ventures by referring customers to one other.”

Because athletes are a target audience, the Hasans reach out to NBA players by sending $125 gift certificates to members of both the local and visiting teams. “We’re trying to develop the athlete business,” said Hasan. “One thing is for sure, they have money and need to dress, especially when they travel.”

The Hasans also know the importance of giving back to the community. In February, they hosted an event, “Shoes for Change,” to brighten the spirits of customers recently faced with unemployment due to the economic downturn. The first 50 men who stopped by the store with a 2009 unemployment check and a valid photo I.D. received a free pair of shoes.

To encourage buying, Tagotti routinely offers a 10 percent discount on all merchandise. And in this tough economy, the owners are willing to be even more generous with price cuts to lock up a sale. “If you can live with that [discount],” said Hasan, “don’t let anyone walk out the door.”

While business to date has been steady, the couple has begun to notice that some men are opting to stretch the life of their shoes by having them repaired. “People can’t afford to buy new shoes right now,” Hasan said, adding that it makes the store’s marketing efforts even more essential.

Tagotti initially approached Roberto Guerrini distributor Ultramoda about the brand’s faster, dressier styles, according to Ultramoda partner Emiliano Baccarini, but the risk-taking Hasans were also encouraged to try some of the brand’s fashion sneakers. “Ali is smart and listens to vendor ideas and feedback from his customers,” said Baccarini.

Aldo Cavallo, owner of Watchung, N.J.-based Nuvolari, distributor of Stefano Castelli, agreed that the Hasans have an eye for styles that will stand out on the shelves. “They want to do something more boutique-like,” he said.

Neighborhood vibe: Located in the Brookwood Square Shopping Center in upscale Buckhead, Tagotti draws destination shoppers, as well as those frequenting nearby restaurants.

Customer base: Everyone from college students to hip 55- to 60-year-olds.

Competition: Nearby department stores Macy’s, Saks Fifth Avenue and Neiman Marcus. “We get to know what the competition is doing,” said Hasan. “Department stores go with the safe stuff; we go edgy. Whatever they buy, we try not to buy. It doesn’t make sense for us [because] next week, they’ll have it on sale.”