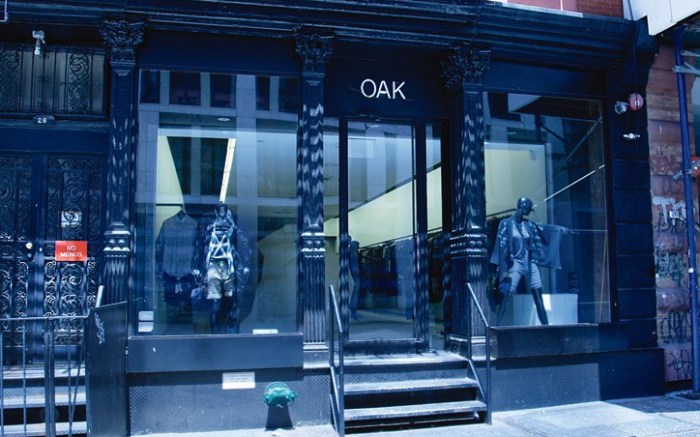 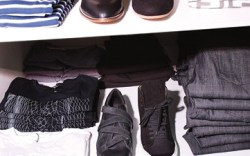 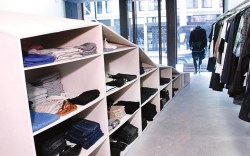 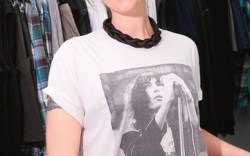 To the casual observer, New York’s Oak might appear to be having an identity crisis. With its high-end inventory, store-within-a-store concept and wholesale showroom all under one roof, Oak wears many hats. But owners Louis Terline and Jeff Madalena have a clear goal: to present limited quantities of apparel and footwear merchandise from both new and not-so-new designers, all painstakingly selected for the 1,500-sq.-ft. shop.

Oak’s Bond Street store in Manhattan opened in 2007, just two years after the original debuted in Brooklyn’s Williamsburg neighborhood. From the start, the new location aimed to differentiate itself from its sister store.

“In Williamsburg, the customer is more laid-back,” said manager Alicia Hogan (above). “[Bond Street] customers are a bit different, so we have to treat them with more of a high-end attitude.”

Oak’s collection of footwear is just as edited as its apparel. The store carries a total of 40 to 50 men’s and women’s styles each season, from 25 to 30 brands. “This past season was the best shoe buy we’ve ever had, and it’s only going to get better,” Hogan said.

Men’s shoe brands include Raf by Raf Simons, Y-3, Timberland, Double Identity and The Generic Man. Women’s styles come from Pour La Victoire, Kris Van Assche and Alexander Wang, among others. And Oak plans to release a private-label unisex shoe for fall, following the success of the women’s shoes it debuted this past spring.

Prices range from around $100 to $800 for men’s footwear and from $90 to $1,000 for women’s. “[Our price range] is representative of our customer,” Hogan said. “It’s our mission to have something for everyone, especially now, when the economy is bad.”

Two people work the sales floor during the week and three on weekends. But no matter when they clock in, Oak’s employees know that customer service and knowledge are key.

“Oak is kind of overwhelming to people,” Hogan said of the store’s slick atmosphere. “My approach is you have to be super-nice to people because we don’t want to scare them away.”

Employees undergo extensive training about the brands carried. “They need to know where everything is made, where it’s from, the background on the designers,” Hogan said. “When you’re talking to customers, they want to know why they should pay $688 for this shoe.”

Oak strives to cultivate a personal relationship with customers, and its marketing efforts reflect that. After a customer has spent a certain amount of money, the staff may decide to give out the Oak Black Card, a 10- to 20-percent discount card. Hogan also regularly calls the store’s best customers when something they might like comes in.

But Hogan said Oak’s real point of pride is its parties, hosted for everything from product releases to Friday night cocktail events in the summer.

The store’s ever-changing interior is in line with its unique retail approach. “We change the store every season,” Hogan said. “We decide to paint the walls, put something in the windows or change the carpet.”

One constant is the gargantuan display case that runs through the center of the store. The wooden structure — part decoration, part display — features several shelves for merchandise. “It’s jagged, it’s wood, it’s unfinished,” Hogan said. “But it’s not just there to look at.”

Oak’s ability to multitask has not shielded it completely from the economic downturn. “Of course we’re a business that’s feeling it, because everyone is feeling it,” Hogan said. “Bond Street is new [to high-end retail], so we thought there was going to be a struggle here, but [we’re] up and surviving.

“It’s really sad to see that other stores are going under and dying and going bankrupt. We are struggling to avoid that happening to us.”

A.OK, Oak’s store-within-a-store, aims to attract an even wider range of customers. The lower-priced area, located in the Bond Street shop’s basement (and at the back of the Brooklyn location, as well as online), stocks a limited assortment of new and vintage items.

“Nothing’s going to be sitting down here,” said Bear Smith, A.OK’s brand manager and Oak’s showroom manager. “If something sits there and then there’s a ton of [inventory], no one’s going to buy it because everyone else and their mom is going to have it.”

Emanuel Harent, senior sales manager for Adidas’ U.S. fashion division, said he likes the treatment Y-3 gets at Oak. “They show the collection a little differently than other stores typically do,” Harent said. “They’re really cool, and we have fun [there].”

Tiffany Tuttle, founder and designer of LD Tuttle, made her first unisex shoes available exclusively to Oak for fall ’09. “They really made an effort to understand the collection [when they picked it up in 2006],” Tuttle said. “The things they were buying were what was most representative of the brand.”

Neighborhood vibe: The Noho area (north of Houston Street) is home to quirky and unique stores, restaurants and historic landmarks.

Customer base: Oak patrons range in age from 12 to 80 and include “celebrities who are known for their style,” said Hogan. “I feel like our customer looks for us.”