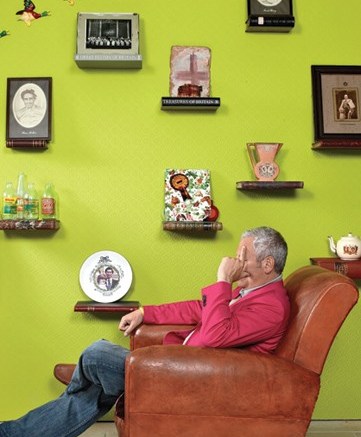 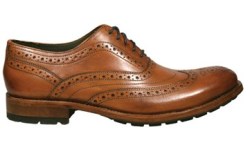 The U.K.-based apparel and footwear brand has built a name around a quirky, eccentric image. Designers are encouraged to find humor in product details. And founder and CEO Ray Kelvin has often let his invented Ted persona speak for the brand he built 20 years ago from a shirt store in Scotland. “Most people have bought into the notion of Ted Baker and what he stands for,” Kelvin said. “Whether they believe he is a real person or not is almost secondary.”

What the company represents, he explained, is quality, value and attention to detail — and staying as far away from the idea of “corporate” as possible.

“To me, the word ‘corporate’ just conjures up images of suited drones — doers, not thinkers,” said Kelvin, who still likes to be known as the “closest man to Ted.” “If we ever became corporate, we’d lose the essence of what has made Ted Baker what it is.”

Even in this unpredictable economy, the company is setting its sights on the U.S. market and launching new initiatives at home. Part of that job belongs to Pentland USA, which holds the license for Ted Baker footwear.

Launched in 2002, footwear is quickly becoming a bigger piece of the pie. While it still accounts for less than 10 percent of the total business, the shoe segment has doubled in the last five years, according to Matthew Rock, managing director of Ted Baker footwear at Pentland.

The U.K. is still Ted Baker’s biggest market, but the company has been increasing its attention on the States. “Ted is really looking to put some weight into the U.S. market over the next two years,” said Rock. “It’s definitely a focus. For footwear, we are looking at how we can establish the brand in a stronger retail setting.” So far, Ted Baker has eight retail shops in the U.S., in such cities as New York, Los Angeles and Las Vegas. Altogether, the company runs 32 stores and 10 outlets globally.

In addition to Ted Baker retail, the footwear also is available in the U.S. at Macy’s and independent shoe stores, including Shoe in Reno, Nev. Zappos.com is another retailer that has picked up many styles from both the men’s and women’s footwear collections.

“Ted Baker is unique in that it is a modern brand deeply rooted in the sartorial traditions of England,” said Fred Mossler, who oversees merchandising at Zappos.com. “The footwear collection is always trend-right, and the attention to detail and humorous branding has been a great option for our customers looking for footwear options outside the ordinary.”

Courtney Rotolo, footwear buyer at American Rag in California, said that although the store does not currently carry the brand, it has in the past. “The women’s is always on trend without being overkill, and the price point is great,” she said. “My hesitation with the men’s is that it may be a little too clean and polished for our market. But it’s something I will always look at. I hope I can write it for spring or in the coming seasons, when my dollars are more.”

At home, new initiatives have helped expand the business. In 2007, Baker introduced a high-end line for men called Ted Baker Pashion, featuring its own line of footwear. And last year, the company bowed Ted Baker & Friends, a concept store in London, where customers can also use the services of an on-site barber, shoeshiner, concierge and tailor.

While the company continues to seek growth opportunities, the shaky economy remains a challenge. Results for 2008 were mixed. License income for the year was up by more than 3 percent, and sales increased by almost 15 percent. But overall, the company’s earnings fell short by 11 percent. “It’s tough out there,” Kelvin said. “Just ask President Obama.”

As the company carefully expands in the Middle East and Asia, including opening a store in Dubai last year, it has faced some of the retail challenges of a faltering economy. Retail sales in the States decreased by almost 3 percent. “We are finding it tough in the U.S., there’s no doubt about it,” Rock said. “But the U.K. is very tough right now, too.” Still, U.K. retail sales were up by almost 16 percent for the year.

When it comes to upcoming initiatives, Kelvin is keeping quiet. But considering his empire already includes such things as mobile phones under the Ted Baker name, anything is possible. “It’s Ted’s 21st birthday this year,” Kelvin said, “so rest assured, we have a few things up our sleeves.”