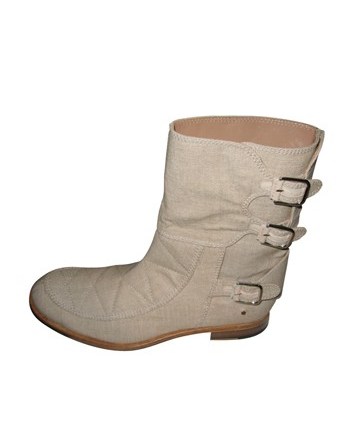 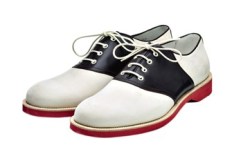 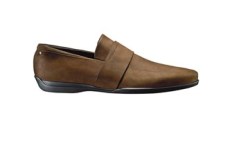 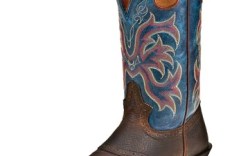 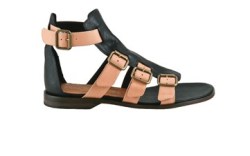 Boot Beginning
Following her solo success in the women’s arena, Laurence Dacade is debuting two men’s styles for spring ’10. The French designer, also a part of the footwear team at Chanel, introduced the boots — named Rick and Ringo — in a variety of colorways and materials such as canvas, calfskin and crocodile. Priced between $850 and $1,200, the collection is targeted to high-end retailers. “I have always wanted to design men’s shoes,” Dacade told Footwear News. “With the great success of my women’s biker boot series, I felt it was the perfect time to introduce a men’s shoe.”

Saddle Up
British women’s footwear designer Rupert Sanderson would like to be clear: He’s not starting a men’s line, but he is venturing into the category for a special collection of oxford saddle shoes. Sanderson, responding to a demand from the men’s market after strong sales for his women’s saddle collection, created the shoes, available in leather in four colorways. The classic oxfords are made in Italy with a traditional construction to be light and re-soleable. Available only at Sanderson’s Bruton Place store in London and online at Rupertsanderson.com, the shoes retail for 295 pounds, or $489 at current exchange.

Hot Rods
Luxury German brand Porsche Design will set its focus on shoes this spring with four made-in-Italy lines. The offering comprises the dressy Milano, in a loafer (at left), derby and oxford; a sneaker called Berlin; the Tokyo, also a sneaker; and the New York, a dress sneaker. The color palette includes Porsche Design’s classic black, white and titanium gray, as well as dark brown. The uppers of the shoes are made of Italian calfskin. The shoes also take the company’s driving background into consideration: The non-slip TPU soles are different on the right and left shoes to allow the wearer to either grip the clutch or quickly change from the accelerator to the brake pedal. The collection, set to retail for $450 to $540, will be available in specialty retailers, Porsche Design locations and franchise stores.

Western Frontier
Justin Boot Co. aims to bring affordability to Western boots and workboots with the launch of the Stampede Collection, set for December and January delivery. The line is composed of five styles: the Western, Punchy, Cattlemen, Tekno Crepe and Workboot. The comfort-driven Western, Punchy and Cattlemen shoes feature perforated, breathable cushion covers, sculptured EVA footbeds, welt stitching and high-density rubber performance outsoles. The Tekno Crepe includes a lightweight midsole, while the Workboot is available with either steel and non-steel toes. The new line is targeted to men and women ages 17 to 40 and will retail for $99 to $159 in Western specialty and workwear retail locations.

Back in Action
Chie Mihara is bringing back her men’s line. The Spanish footwear designer officially launched a sandal collection for men for spring ’09, and after skipping a season, the line is returning, complete with Mihara’s avant-garde sandal designs and self-made anatomic footbed constructions. The eight styles, retailing for $410 to $515, feature details such as buckles, Velcro closures and short laces on gladiator-inspired styles (at right), and slip-ons and oxfords with cutouts, all in brown and neutral palettes. The collection will be targeted to better department stores and specialty boutiques across the country, as well as sold online at Chiemihara.com.

Birthday Present
In 2010, Allen Edmonds Shoe Corp. is celebrating the 30th anniversary of its Park Avenue style, a balmoral that has become a business classic for the company. To mark the milestone, the Port Washington, Wis.-based company will offer a pair of engraved cedar shoe trees with each Park Avenue purchased throughout the year at Allen Edmonds stores and online at Allenedmonds.com. The engraving will read, “Allen Edmonds 30th Anniversary Park Avenue/the Great American Shoe for Business.” In addition to the usual black, dark-brown burnished and merlot calfskin options, the company will add walnut grain calf in honor of the anniversary. The shoe retails for $325.