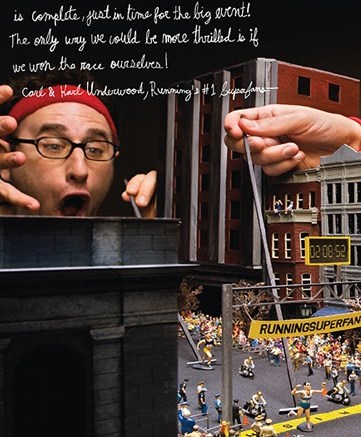 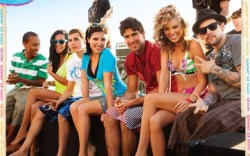 Run Funny
What do you get when you combine a boutique running brand with a pair of sports-obsessed comedians? Some really funny running jokes (and none of them about a refrigerator).

The punch lines are courtesy of twin brothers/actors Randy and Jason Sklar, the stars of Brooks’ latest advertising campaign, which launches in the May issues of Runner’s World, Running Times and Women’s Running. In the ads, the Sklars take on the personas of Carl and Karl Underwood, running’s No. 1 superfans, who show their devotion by such outrageous acts as building a full-scale macaroni sculpture of athlete Brian Sell and reenacting their favorite race events.

Dave Larson, VP of marketing at Brooks, said the company is banking on the power of the Internet to do much of the work for them. “Our brand is small and we don’t have the media resources our competitors have,” he said. “But now with the digital world, it’s a new ball game for everybody.” The company threw two-thirds of its advertising budget into production on the campaign and hopes the videos will at least reach several million runners. “It’s not easy to break through the clutter,” Larson said. “But we tried to marry people’s love of running with a comedic approach, and hopefully people will take note.”

The campaign was created by Brooks’ longtime marketing agency, Portland, Ore.-based Great Society, and expands on its “Run Happy” tagline. The Sklar brothers will make their first public appearance for Brooks on April 17 at the Boston Marathon expo.

Op’s Summer Crowd
Iconix Brand Group has a new crop of Hollywood “it” kids for its Op ad blitz. The “Summer of Music” campaign, kicking off this month in fashion and entertainment magazines and at Op.com, features AnnaLynne McCord (“90210”), Sophia Bush (“One Tree Hill”), singer Solange Knowles, rapper Bow Wow, Brody Jenner (“The Hills”), Cody Linley (“Hannah Montana”) and Joel Madden of Good Charlotte. Photographer Larry Bartholomew shot the images, which show the group beachside at a Good Charlotte concert and outfitted in Op apparel (the brand’s flip-flops were a no-show because the stars went barefoot in the sand). Iconix is extending the concert theme for the campaign by sponsoring music festivals and events throughout the summer. Its spokes-team also is scheduled to appear at a launch party in California this summer and make personal appearances for the brand.

Dot Com Debuts
The Internet was a busy place this week. Teva officially launched a redesigned site on Monday that includes an enhanced product section and a new area called Tribe, where visitors can interact with company employees, athletes and fellow enthusiasts, and learn about upcoming events. Meanwhile, Puma debuted Pumamotorsport.com, which serves as a central hub for motorsport news, opinions and stories. Formula One Driver Anthony Davidson and former driver David Coulthard will write regular columns for the site, and fans will have the chance to contribute to the editorial coverage.