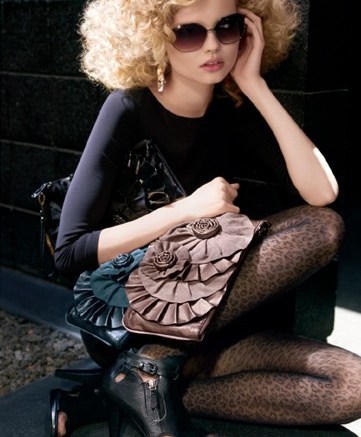 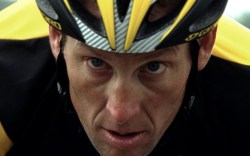 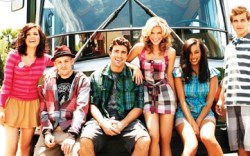 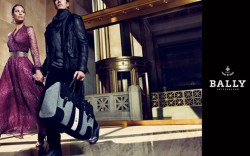 Nine West Flashes Back
It was a decade of high gas prices, recessionary times and larger-than-life fashion and entertainment. No, not the 2000s, the 1980s. And Nine West is betting that consumers see the similarities, too. For its fall advertising campaign, the New York-based accessories brand is harking back to the Reagan Era, with glossy images inspired by the ’80s. The campaign, shot by Nine West go-to lensman Cliff Watts, styled by Maryam Malakpour and featuring model Magdalena Frackowiak, sets the brand’s high-glamour products against the bare landscape of Joshua Tree National Park in California to play up the dramatic details. “For the Nine West customer, shoes equal fun, passion and great updates,” said Debbie Woloshin, SVP of marketing and advertising for Nine West. “This season brings the look of Dynasty-style glitz and glam to entice her.” The campaign will hit in select September fashion magazines, as well as in stores and on the Nine West Website.

You & Lance
For years, Lance Armstrong has been the public face of the Lance Armstrong Foundation, but as the athlete says in a new commercial that began airing last week, his press coverage lately hasn’t been ideal. Doping allegations, a splashy divorce and controversial breakup with singer-girlfriend Sheryl Crow have often overshadowed the efforts of Armstrong’s organization. But a new media and grassroots campaign aims to change that. “It’s About You,” presented by Nike and the Armstrong Foundation, invites athletes, celebrities and everyday people to represent the fight against cancer. The campaign kicked off June 28 with a 30-second and 60-second commercial, created by Wieden & Kennedy in Portland, that’s running on major broadcast and cable networks throughout the Tour de France. And online, Nike is releasing a series of short films starring actor Patrick Dempsey, runner Sanya Richards and others sharing their personal stories.

Photo Op
Op got an extra boost of publicity from its fall ad campaign. Just hours after announcing that actors and musicians AnnaLynne McCord, Sophia Bush, Solange Knowles, Joel Madden, Brody Jenner and Cody Linley would return for a second multimedia campaign for Iconix Brand Group, People.com picked up the news and images from the photo shoot. “Part of our marketing efforts include a big emphasis on public relations,” said Iconix chief marketing officer Dari Marder. The campaign, titled “OPen Campus,” was shot by Larry Bartholomew at University High in Los Angeles and debuts later this summer in fashion, lifestyle and entertainment magazines, and online at Op.com.

Bally’s Who
After spending spring and summer poolside in Miami, the “quintessential Bally Man and Woman” (aka Christy Turlington and Oriol Elcacho) are heading to New York for autumn and winter. Bally’s latest print campaign, appearing in the August issues of Harper’s, Vogue, W, Esquire and GQ, once again stars the models, who were photographed by Mario Sorrenti and styled by Lori Goldstein. Bally Creative Director Brian Atwood and Art Director Thomas Lenthal provided direction. According to a company spokesperson, the shooting location in Lower Manhattan was key to the campaign’s look, as the polished art deco architecture exuded a sense of “inner calmness and confidence.”