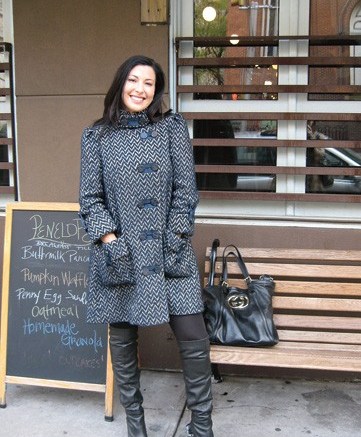 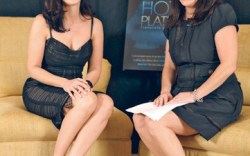 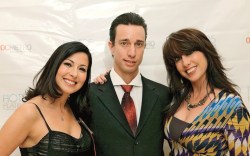 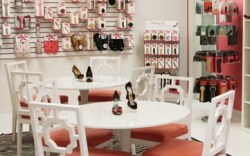 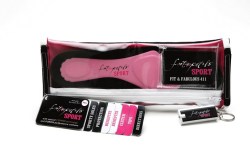 Tina Aldatz is all smiles inside the shabby-chic Penelope coffee shop in midtown Manhattan, where we grab breakfast before hitting the recent FFANY show. There is much to talk about after her announcement that Foot Petals is moving into full-fledged footwear. Her license agreement will be with Deerstags, and the debut season is set for holiday ’10, with an exclusive launch on HSN priced from $79 to $129.

“I’ve already started with the designs. I’m inspired by vintage 1940s looks, pin-up girls and the elegance of flamenco dancing (I’m half Mexican!). We’re planning a soft launch for holiday and then a full collection for spring ’11. It’s focused on special-occasion and bridal, and there’s a custom blue, heart-shaped tip-toe [cushion] inside,” she describes.

But that’s not the only news from this 40-year-old mover and shaker. After traveling recently to Germany, Switzerland, Spain, Singapore and Australia, Tina and company VP Margie Floris have secured exclusive distribution deals in each country, which means Foot Petals products are now available in 70 countries. “We were like rock stars in Singapore,” Tina recalls, laughing. “Now, with Obama [in office], it’s much different. Two years ago, we were not received with open arms abroad.”

Of her business, Tina says, “It’s really cool because when our department stores slowed down in the U.S., we grew abroad. Overall, we came in flat last year, but what’s really exciting for me is the 3 percent increase on our net profit. I learned how to cut back and run a leaner business, but without making layoffs. In fact, we hired three people this year.”

Foot Petals, founded in 2002, is going sporty in February with high-performance replaceable insoles sold in a reusable bag that features a flashlight and ID slot. Tina says, “I always loved the design of this bag by Emily Blumenthal and we signed a licensing agreement with her to use it for our packaging.” And the company recently debuted a new sock kit called Sock-a-Bye Baby for new mothers. It features non-stick socks for moms and an ultra-soft pair for newborns. Fall ’10 will bring a shoe care line done in “a modern, cool, chic way.” (As in, the signature Foot Petals treatment.) It will revolve around a three-step system, similar to the beauty systems used by such brands as Clinique, but made for shoes and handbags.

Foot Petals’ collection for Target, called Fab Feet , also has found success, with 50 SKUs sold at 1,700 stores nationwide. The special Stiletto Survival package was named one of Target’s “Top 10 most giftable items” for the holiday season. When asked if this would make Target her biggest account, Tina stresses, “Target, Dillards, Nordstrom and HSN really all go neck and neck. It’s so important to be diversified.”

When I ask what else is new, Tina confesses she was named to OC Metro magazine’s “Hot 25” list, of people who are shaping Orange County’s business, politics, education and philanthropy. After a glowing review of the awards reception, Tina groans and recalls her embarrassment over one of her quotes in the magazine. “They asked everyone what three things you can’t live without and I was trying to be cute, so I said my AmEx, my Amazon Kindle and my Blackberry — boring!” As for what the update would be, she said it’s “coffee, my Chihuahua and my car.”

Tina also was featured recently in an AmEx Small Business Open Forum video, where she encourages other small business owners to empower their staff and “think outside the shoe box.” In the endearing, short video, they jokingly call her “The Shoe Whisperer.”

But all jokes aside, Tina does seem to have a gift for business, though she doesn’t do it alone. Her sister, Angela Aldatz (who Tina describes as being “so fun she’s like a walking party”), runs sales for the western U.S. out of the Los Angeles office, and she is also the photographer for many photo shoots and the voice in the Foot Petals song. Tina laughingly says, “She kicks me out of the booth at trade shows. I’m the worst salesperson ever!” I’ve heard that statement from Tina before, but still don’t believe it. “Meanwhile, it’s my mom I had to fire,” Tina goes on to explain. “She was the worst employee in the world. … Gossiping, French braiding people’s hair. I had to kick her out and she was all, ‘You can stick this job.’ Luckily, we laugh about it now.”

Giving back is also central to Tina’s life. “For Thanksgiving, five of us from our office took shifts at a program called We Give Thanks, which provides for 16,000 homeless and needy people in Orange County. My sister and niece and I peeled 1,000 potatoes, and I think my thumb is still numb,” she says. At home, she takes care of her 17-year-old brother (she is the eldest of six), and her 19-year-old niece also moved in recently. Tina, who is loving being single, says she feels “really free and happy. … I don’t have children of my own, but I feel I’ve been blessed in a different way. They come up to my room and just lay around and we talk about everything. Also, with all this travel, it’s great because there is always someone at home.” Perhaps the coolest part is that she has converted her garage into a drum studio, so they can have jam sessions.

As we’re walking out, I ask what’s next on Tina’s FFANY schedule. She’s headed to meetings with Sonny Shar of Pentland USA and Jim Issler of H.H. Brown, who she calls “one of my mentors — he’s a genius!” H.H. Brown’s new eDreams Direct division will handle Foot Petals’ e-commerce, warehousing its entire inventory to drop ship directly to customers. “This way, everybody wins because buyers who didn’t pick up enough inventory — or any at all — can still offer the full collection,” Tina says. All I can say is: It’s never a dull moment with this businesswoman-turned-designer.