Launch of the Year: Florsheim by Duckie Brown 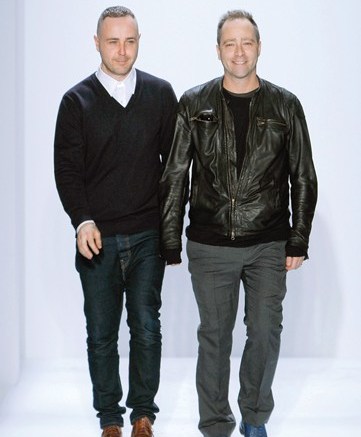 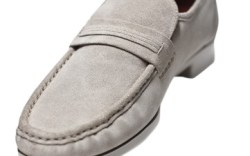 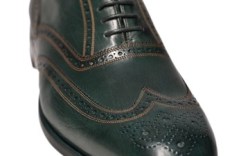 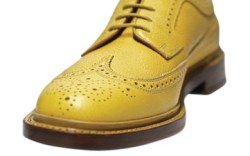 Florsheim by Duckie Brown might look like the least obvious pairing the footwear industry has seen in a long time, but its collaborators insist it makes complete sense.

“People think we are these two kooky designers from New York,” said Steven Cox, who designs the Duckie Brown men’s apparel line with partner Daniel Silver. “But we’re more similar to Florsheim than people think. We’re both based in that classic tradition. It was a perfect match.”

The union started when Florsheim set out to find respected designers to mine the company’s 100-year-old archives and put a twist on its classic men’s shoes. After reading a magazine article about Cox and Silver outfitting a high schooler in their own clothes and Florsheim shoes, the firm brought the duo to its Wisconsin headquarters. At first, though, the execs at Florsheim were a bit stunned by the designers’ ideas for the line, which included a laceless wingtip, studded cap-toe and suede loafer in 10 different colors.

“When they came out [to Milwaukee], they had this whole presentation of colors,” said John Florsheim, president and COO of Weyco Group Inc., parent company of the Florsheim brand. “We had to process it at first. It was so foreign to the men’s shoe business, which is so black and brown. After we got past the initial shock, we really liked it.”

And the retail accounts soon rolled in. For its debut season, Florsheim by Duckie Brown landed in Barneys New York, Saks Fifth Avenue, Bloomingdale’s, Nordstrom and other specialty stores, including Odin in New York, Confederacy in Los Angeles and The Tannery in Boston.

Many of those retailers had remained elusive to Florsheim over its long history, so the new accounts have given the company something to sing about, especially in a down economy. “I never dreamed we’d be in Barneys,” said Tom Florsheim Jr., chairman and CEO of Weyco. “But what was interesting to us was that the [average] $295 price point is actually an opening price point in a lot of these retailers. So even though it was high-priced for Florsheim, it was a good price point to have in this economy.”

Retailers agree. Melissa Gallagher, VP and DMM of men’s footwear and accessories at Barneys New York, said the line is already doing well in the New York store and will expand to other locations for spring.

“We sold out of the blue wingtip right away,” she recalled. “We really like the combination of classic made very modern and fun. It appeals to a broad range of customers.”

Eric Jennings, VP and men’s fashion director at Saks Fifth Avenue, said the collection has embraced the current vintage craze while managing to offer investment pieces to men who might be apprehensive about shopping these days.

“They’ve captured this whole trend of dressing like your grandfather, but it’s fashion-forward and not stodgy,” said Jennings. “This type of wingtip brogue is so popular, and they just nailed it — at an accessible price point.”

But even though the line has already surpassed the company’s expectations, it remains small compared with the main business at Weyco, which also distributes the Stacy Adams and Nunn Bush brands.

As for the collaboration, all are hoping for a long and healthy partnership.

“Like any relationship, today I hope it lasts forever,” said Silver. “But right now, the goal with the shoes is to make it consistent and build a customer base and continue to do product that people want to buy. Whatever happens from there, we’ll try to grow naturally.”

Though the Duckie Brown pair has added even more to their collective plate this year with the debut of Edward, a moderate apparel line exclusive to Odin, they both remain committed to shoes.

For his part, Tom Florsheim Jr. is very aware of how much his company pushed the envelope — and how much it has benefited.

“This collaboration has given us the license to explore in a way that Florsheim, as a brand, wouldn’t be able to get away with [on its own],” he said. “[Duckie Brown] has helped the image of the overall brand. And we’ve learned how important it is to get out of your comfort zone.”

And the proof is on his feet: Both he and John are now wearing the shoes that had at first taken them aback.