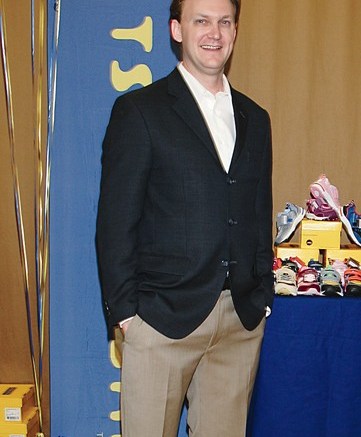 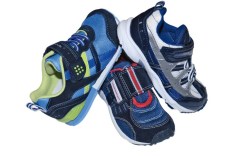 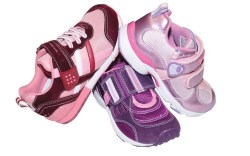 When one of Japan’s oldest and most recognized names in kids’ shoes decided to tap the U.S. market in 2005, it faced two major obstacles: The brand wasn’t well known here and it had a hard-to-pronounce name. That was then.

Now Tsukihoshi, which has been making shoes for 135 years, has more than 700 accounts in the States, ranging from children’s independents to majors such as Nordstrom and Zappos.com.

“The line really took off,” said Matt Butlett, Tsukihoshi’s U.S. brand representative. “That the brand has been making shoes for so long carries a lot of weight.”

What makes Tsukihoshi so appealing, Butlett said, is its unique blend of fashion and function. Kids like the shoes’ bright colors and sleek Japanese styling, and parents appreciate their versatility. The shoes are machine washable and incorporate such performance features as stabilizing heel counters, molded cup insoles for arch support, lightweight flexible bottoms, reflective safety materials and removable antibacterial insoles. In addition, roomy toe boxes allow toes to splay on contact with the ground, and wide Velcro closures make it easy for kids to get the shoes on and off.

“It’s a great all-around shoe for the proper development of kids’ feet,” said Butlett. “Once parents are educated on the many features and benefits and the child gets the shoes on his or her feet, customers become very loyal to the brand.”

And at a time when parents are seeking to stretch their dollars, Tsukihoshi’s moderate prices — $45 to $65 at retail — also have been a big advantage, according to Butlett. “It’s tough out there. People are looking for value right now, and Tsukihoshi delivers that,” he said.

The collection started out small in the U.S. The inaugural delivery was composed of five sneaker styles in three colors each. Today, the assortment spans more than 25 sneaker styles in as many as five colors each, including laceups, single- and double-Velcro-strap patterns and Mary Jane looks. “We wanted to be conservative in the beginning, we wanted to grow the brand organically,” Butlett said.

Initially, the line focused on toddler and children’s sizes. But in January, in response to requests, a first-walker collection and youth sizes were added. “We now have a complete offering,” Butlett said, noting that demand for the first-walkers has been particularly strong. “It gives the brand a more solid presence in the stores.”

Retailers that carry Tsukihoshi say they like what the brand can add to their mix. “We were happy to see it — it was something new, something fresh,” said Jennifer Thomas, owner of the Chicago-based boutique Piggy Toes, which picked up the line three years ago. “For a sneaker line, it’s really colorful, fun and kid-friendly. That you can throw the shoes in the washing machine is a huge selling point.” Another big plus, she noted, is the price. “With the economy right now, there’s a big difference between paying $79 [for something else] and $59 [for Tsukihoshis].”

David Fenwick, owner of Sandy’s Shoes in Austin, Texas, said Tsukihoshi has been a hit since he picked it up in 2006. “It’s my No. 1 line,” he said, “and Sandy’s is a high-volume store.” The product, he added, practically sells itself. “The brand’s got a really clear, simple story to convey to customers. The shoes are lightweight, they come in all these bright colors and the closures are easy for young children. You don’t get too many brands like this.”

In addition to the U.S. and Japan, Tsukihoshi has limited retail distribution in China, Korea, Singapore, Thailand and Taiwan. And a Canadian distributor, Oasis Footwear, was brought on board earlier this year. But the U.S. remains the brand’s primary focus, Butlett said. “We see a real opportunity here,” he noted. “The product has particular appeal for the American consumer, and the U.S. is obviously one of the most important markets in the world.”

Still, he admitted that Tsukihoshi’s hard-to-pronounce name was initially a challenge in the States. “At first, the retailers asked us to change the name — they wanted something easier,” Butlett said. “But now, they think it’s fun and gives the brand a sense of authenticity. And if Americans can learn to pronounce words like Mitsubishi, Tsukihoshi shouldn’t be too much of a challenge.”

While Tsukihoshi is still building a following in the U.S., it has so far preferred to take a grassroots approach to marketing. In fact, Butlett said the brand’s retail accounts have been instrumental in generating awareness and excitement for the brand and educating consumers about the product. “The retailers have done a lot of the work for us on the marketing end. They’ve really gotten behind the product and made a huge difference for us in terms of getting the word out.”

When it comes to building buzz, the brand also has received help from Hollywood. Tsukihoshi’s shoes have been spotted on the children of numerous celebrities, including Angelina Jolie, Sarah Jessica Parker and Julianne Moore. “It certainly doesn’t hurt,” Butlett said of the brand’s repeated exposure in celeb glossies such as Us Weekly and In Touch. “It definitely gives us a boost. Retailers see the shoes on these kids and call us wanting to pick up the line.”

Looking head, Butlett said Tsukihoshi will expand beyond sneakers to add categories such as sandals and boots. The company also is fielding requests for adult footwear. “We’ll have some exciting new things coming out in 2010,” Butlett hinted. “We’re hoping to significantly expand the line. But whatever we do, we want to make sure we stay true to the Tsukihoshi brand.”