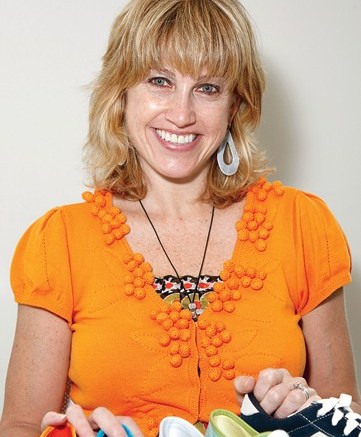 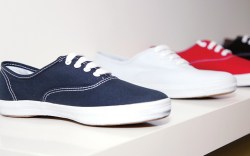 NEW YORK — In an effort to move forward, Keds is once again touting its heritage in a big way to court the coveted millenial consumer.

“We are the original sneaker and we really want to celebrate the blue label and the Champion as our core product offering,” said President Kristin Kohler Burrows, who joined the brand, a division of Collective Brands Inc., last November. “This is the shoe that’s been around since 1916.”

Burrows, who has worked at Jessica Simpson, Converse and Adidas, is going after the 24-year-old man and woman with new adaptations of the classic Champion style, a new Web initiative and a push into premium stores.

“We really feel like that consumer is a large part of the reason why [the country] is in a more optimistic era now,” Burrows said. “They helped usher in the new president, and this collective spirit is what their generation represents, and that’s what Keds represents.”

Also part of the revamp is a more direct link with Pro-Keds, which in the past has been treated as separate from the main collection.

“We’re bringing the two labels together so there will be Pro-Keds blue label and Keds blue label under the Keds brand halo,” said Burrows. “We think they both tell a similar story, they just speak in slightly different tones, and it’s a great advantage to use both angles to tell the blue-label story.”

This is not the first time the brand has refocused the line to draw upon its heritage. While past efforts to court a younger, more fashion-forward customer have failed to create noticeable sales increases, analysts said spring ’10 could mark a turning point.

“Keds continues to be a work in progress,” said Chris Svezia, an analyst with Susquehanna Financial Group. “But they’re incrementally taking the right steps in terms of distribution channel, product and price point.”

“We believe the time is right to go back to our roots and celebrate the blue label based on what is happening in the world today,” said Burrows. “There is a return to brands that are familiar and trusted, and Keds certainly has a long trusted history that resonates with consumers.”

Prior to the Collective acquisition, there were “hits and misses” by the brand, said Svezia. “They would gain traction, but be bogged down by a reliance on mid-tier channels of distribution.” Changes in management and strategy could boost the company’s efforts, he explained. “Ultimately, consumer reaction to the product and how serious retailers are about it remains to be seen.”

On the retail front, an outside sales agency, The Foundation, is helping to further push the brand into premium accounts.

“We have started to put together a more sophisticated distribution strategy, really trying to create different product packages according to how and where the consumer is shopping,” said Burrows.

At the Capsule trade show in New York in July, retailers reacted positively to the brand, said Ari Langsdorf, a partner with The Foundation.

“We’re talking to top accounts including Atrium, Saks Fifth Avenue, Revolve Clothing and Hub in Arizona,” he said. “There is not a retailer out there who doesn’t know Keds. They may have a positive or negative mindset, but everyone knows it. That level of credibility is huge.”

“That classic, American heritage is really strong,” he said. “We’re seeing it [in apparel] with Dickies, Ben Davis and Carhartt. It just makes sense that it would translate into footwear.”

Already the brand is starting to see the results of its efforts. Retailers such as Opening Ceremony, American Rag and Kitson are stocking the line, and celebrites like Kristen Stewart of “Twilight” and singer Katy Perry have been donning the styles.

Barneys New York recently bowed the Keds by Loomstate collection at a $75 price point, and upcoming collaborations include a limited-edition Pro-Keds collection with sneakerhead and author Bobbito Garcia, as well as a Pro-Keds partnership with Scoop stores this month.

Jay Andrews, men’s buyer for the Los Angeles-based Kitson stores, was upbeat about the brand, which it will start to offer this month. “They’ll do really well. We put them in two stores, and that look is really in right now,” he said. “Urban Outfitters and Topshop carry similar styles, but we wanted to find something that would be suitable for us in that style, and though Keds isn’t a typical men’s brand, it’s got that hip factor to it right now.”

Jeffrey Kalinsky, founder of the Jeffrey New York and Atlanta stores, said his collaboration with the company, which featured the Champion in suede neon colors, was a hit this spring, with one color selling out completely.

“For me, Keds is a lifestyle brand, it’s not about price point,” said Kalinsky. “It’s one of our greatest treasures in terms of a lifestyle product. It’s as American as Coca-Cola.”

Looking ahead, Burrows said Keds Green Label, which has been a strong seller at Colette in Paris, would continue to expand. “We’ll definitely look to take more risks with that product,” she said, noting that the brand will add new styles, as well as distribution partners.

In addition to a new print and in-store advertising campaign that will hit for spring ’10 and increased social marketing efforts, the brand is relaunching its Website in October. Though Burrows declined to give specific details, she said the site will push the blue-label image and Keds history and could be more interactive for consumers. Additionally, the Keds Studio customized collection could undergo some changes on the Web.

“We’re looking at renaming it as part of our Web launch, but there is a lot of richness there,” Burrows said. “It’s an important way for us to have the consumer participate in the development of the brand.”