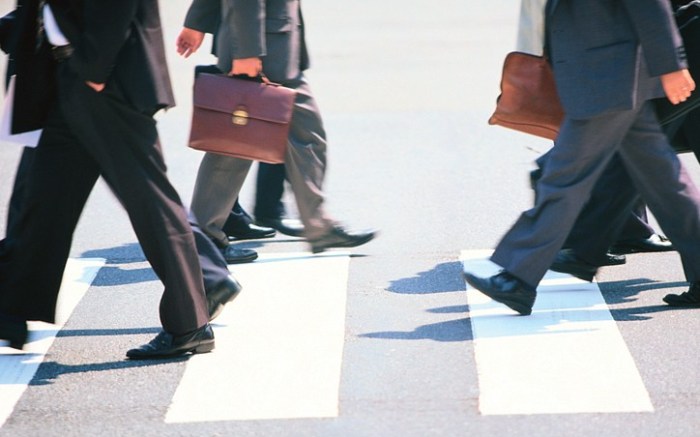 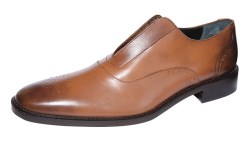 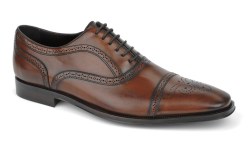 As the job market tightens, the right look can be just as important as the right qualifications. For workers who find themselves on the interview circuit, as well as those fortunate enough to have evaded a pink slip, a new suit and shoes can go a long way.

“It’s already happening in apparel,” said David Wolfe, creative director of The Doneger Group, a New York-based retail and trend consultancy. “There has been a definite resurgence in tailored clothing over the past few years.”

It’s a trend, Wolfe explained, that is likely to pick up momentum in the current economic climate. “We dressed down for so long, it’s getting boring. There’s a feeling that it’s time to clean up our act.” With dressier clothing comes the need for dressier shoes — a potential boon for footwear vendors.

A more polished look can lead to a more positive attitude, and can even affect a person’s posture and self-confidence, said Joel Jaffe, men’s shoe buyer for Philadelphia-based specialty store Boyd’s. “And people judge your qualifications by your appearance before you ever have a chance to say a word.”

Marshal Cohen, chief industry analyst for Port Washington, N.Y.-based NPD Group, agreed. “If you look the part and dress the part, odds are you can convince someone you are more qualified [than the competition],” he said.

Glendale, Wis.-based Weyco Group, manufacturer of the Florsheim and Nunn Bush brands, has seen a noticeable uptick in sales of its dress-casuals on refined rubber soles, according to John Florsheim, president and COO. “Men got a little too casual in the work environment and are now veering back to dressing up,” he said.

Black shoes, in particular, have been strong for the company. “Dress-casuals look even dressier in black,” said Florsheim, pointing to the color’s versatility.

Adam Derrick, creative director and co-chairman of To Boot New York, said the trend toward dressing up is reflected widely in the brand’s fall ’09 collection. “The group that has had the strongest bookings for us has been a collection of updated dress and business classics at $295,” Derrick said. The shoes feature a flexible construction built on rubber bottoms with a leather-sole profile. “I don’t see men wanting to sacrifice any of the comfort features they have gotten used to in their casual Friday shoes.”

Indeed, comfort brands such as Earth Shoes are seeing increased interest in their classic looks. For fall, Waltham, Mass.-based Earth is offering a series that includes a penny moc, as well as cap-toe and plain-toe laceups. “It’s the dressiest group in the line,” said Verne Aisner, director of marketing, noting that the shoes are designed with Earth’s signature negative-heel technology and arch supports.

With the economy showing no signs of an imminent recovery, employees aren’t the only ones concerned about making a good impression in the workplace: Employers are now taking a more active role in the way their staffers dress. In fact, last February, several Boston-based financial firms approached Allen-Edmonds to ask whether the company’s two Boston stores could set aside time for their employees to do some private shopping.

“During these difficult times, upper management is emphasizing the benefits of presenting a more professional, polished image,” said Ann Smith, store manager for both Allen-Edmonds locations. “We saw it in fall ’08, and it has been evolving. And it’s definitely coincided with the economic crisis. Companies are taking a hard look at ways they can give their employees an edge in the marketplace.”

The two stores stayed open late two nights each week for a two-week period in February to serve these individuals. In addition to receiving personal attention from sales associates, men were treated to cocktails, creating a more relaxed atmosphere.

To encourage buying, Allen-Edmonds offered special pricing on its Timeless Classics collection, which includes four of its all-time best-selling styles. Typically priced at $325, the shoes were available for $280.

Based on the success of the event, the company has held similar events at its stores in Phoenix and Chicago, and the initiative will be rolled out to other cities in the future, according to Steve Grimm, Allen-Edmonds’ director of retail.

Although men may be paying more attention to their professional wardrobes, they also are minding their budgets more closely. To meet their needs, Robert Cameron this November is launching a collection of leather-soled dress shoes retailing from $175 to $215. “We saw a void in the marketplace for a leather-soled line at prices that would appeal to a broad range of consumers,” said Kevin Walder, sales representative for St. Louis-based Diba Imports, the line’s distributor. Since men are looking for value these days, he explained, the shoes’ leather bottoms can be resoled, extending their life.

With unemployment fears continuing, men will be using all of their ammunition — from their skills to their style — to gain an edge. “When everything else is even,” Cohen said, “image is the tipping point.”