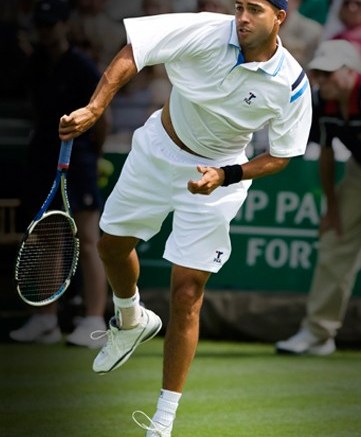 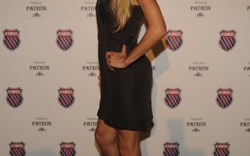 Take It to Court
It was all about the U.S. Open this week in NYC, and Thursday night was no exception (see expanded coverage of U.S. Open events in Monday’s column). At the launch if his new clothing line with Fila at Manhattan’s Lord and Taylor, U.S. Open contender James Blake gave Insider the scoop on the footwear component of the collection, called Thomas Reynolds, set to debut next year. “I just wanted [the line] to be functional,” he said. “Shoes, to me, are the most important piece of equipment on court. Your feet are always moving and the guys who are the best in the world have the best footwear. So [the shoes had] to be something that perform well — a lot of traction so you’re not slipping on the court. These shoes will be very stable and very functional, and any athlete out there could wear them.” So will viewers and spectators at Monday’s Open get a chance to see the new kicks in action? The jury is still out. “I’m hoping they’re going to be ready!” he said. “We’re getting down to the deadline. I think they will be ready in time, but it’s going to be one of those last-minute things.”

Maria Makes it Happen
The same evening, Maria Sharapova volleyed into the fashion world to unveil her Cole Haan footwear collection, along with the brand’s newest billboard, to shoppers and fans at Cole Haan’s Rockefeller Center store. The last non-tennis stop on her agenda before the U.S. Open kicks off on Monday, Sharapova signed autographs and dished with Insider about the sketches she drew for Cole Haan execs and designers. “It’s a good way to express your ideas,” she said. “I’m really hands-on with the things I do.” The tennis pro even brought storyboards and tearsheets into early meetings, said Cole Haan VP and CEO James Seuss. “She’s a world citizen and is inspired by so many things,” he said. “She knows what she’s talking about.”

Cat-Walking for K-Swiss
Wednesday night, Insider caught up with Vera Zvonareva at the K-Swiss spring 10 launch party in Manhattan, where the U.S. Open hopeful was walking the catwalk in her sponsor brand’s latest styles. Zvonareva told Insider it was her first go at the catwalk, but that the experience left her with a taste for Fashion — convenient, then, that New York Fashion Week is coming up: “Now that I did my first runway, maybe I’ll check it out,” she laughed. But for now, she said, the focus is on the upcoming tennis tournament. “You’re always [nervous],” she said, “but I’m excited to get on the court.” Longtime K-Swiss spokesmodel Anna Kournikova won’t be making the scene in Queens, but she also took to the catwalk at the event, after appearing earlier in the evening in jaw-dropping YSL stilettos. She told Insider that, vertiginous height aside, she might as well be wearing flats. “They’re very comfortable. I am all for comfort,” she said. “I will never sacrifice comfort for sexiness.” Lucky girl.