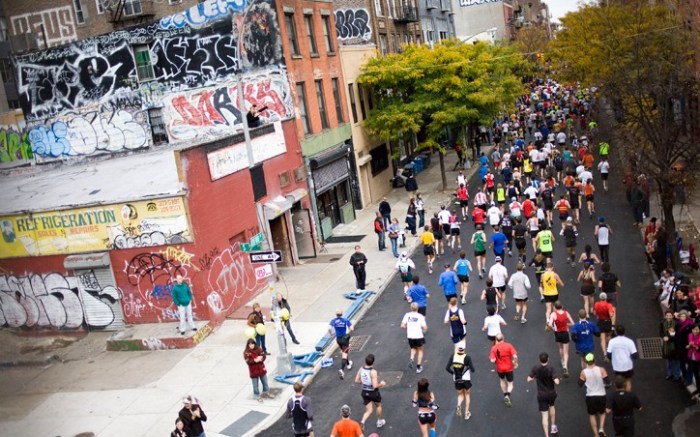 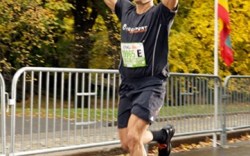 For 26.2 miles through all five boroughs, the ING New York City Marathon is one of the running world’s signature events. Held last Sunday, the race grabbed even more headlines than usual when runner Meb Keflezighi took the men’s top spot (with a time of 2:09:15) and became the first American male to win since 1982. But there were plenty of shoe industry players who laced up for the race as well — and Insider caught up with some of them about this year’s event.

Dressed to Kill
For Canton, Mass.-based Rockport, this marathon represented both the future and the past. The brand launched its DresSport campaign back in 1991 with then-employee Tony Post running in the shoes and came back to this year’s event to relaunch the collection. It also released a limited-edition shoe inspired by the race (with a portion of proceeds benefiting ING’s Run for Something Better charity).

But instead of relying solely on employees this go-round, Rockport signed up Andy Baldwin, U.S. Navy lieutenant commander and former star of “The Bachelor,” to don the DresSport 2 during the race. Baldwin finished the run in a very respectable 3:21:33 (and only a week after completing the Marine Corps Marathon in Washington, D.C.). He told Insider before the race that running for a cause keeps him going.

As for his dating life post-reality-TV, Baldwin said he’s keeping it private these days, but isn’t expecting wedding bells anytime soon — or another TV show. “Maybe someday, hopefully. [But] I don’t know who’d want to date me with my travel schedule right now. But no more reality TV for me. It was a very interesting experience, and I have no regrets.”

Back in Action
Wes Card was among those who took to the streets on Sunday. The Jones Apparel Group CEO told Insider he got back in the marathon game three years ago after running several in his 30s. Card said this marathon — his last was Boston — was memorable for the unique experience of running in New York. “The New York [marathon] is an amazing event. I would say it was totally New York: big, loud, exciting and with parts that were really electrifying,” he said. Will spectators see the CEO out on the course again next year — or in other races? Too soon to tell, he said. “You don’t really think about [running again] in the first few days,” he said, noting that he needed a week or so away to get his bearings. “Tomorrow I’ll be back and give it some thought.”

First-Time Fun
Among the many first-time marathoners who took to the streets were Josh Willis, sales, marketing and design team member at Creative Recreation, and Christopher Pepe, an associate buyer for Barneys, who both started training in April for the race after long hiatuses from running. And both men —friends through their jobs — said the experience was one for the books. Willis, who found time to train by jogging during travels in Europe and Asia for work, said his favorite part of the marathon was running in the streets of New York. “That was the coolest thing, looking up the whole time, seeing the city and being on the streets running,” he said. As for Pepe, he said the legendary crowds that accompany the New York race surprised him. “It was crazy — I had never witnessed anything like it,” he said. “It helps, too. When you’re in areas that don’t have as many people there, it’s definitely slower. When you’re crossing the 59th Street bridge, all you hear is the stomping of people running and the cars driving by and it makes it harder. But when you come down onto First Avenue, there are thousands of people.”

Ruthie’s Run
Designer Ruthie Davis is a repeat New York marathoner — and this year, she shaved off nearly 18 minutes from her 2008 time. Davis clocked in at 3:55 and maybe could have gone a little faster, she said. “Today I feel great,” she said the day after the race. “I’m thinking maybe I could have picked up the pace a little. But I made a mental decision not to push it too far and injure myself.” Davis told Insider she was excited about the race, but had a tough time getting rid of the jitters the night before. “I was totally stressing out and couldn’t sleep. My husband said to me, ‘You’re a shoe designer, not a marathon runner. You’re doing this for fun,’” she laughed. As for future marathon plans, Davis is toying with the idea of running the Florence marathon in Italy, but isn’t ruling out a return to the New York course, thanks to the uplifting crowd of more than 2 million spectators who come out each year. She said, “The great thing about the New York City marathon is that it reminds you how great New Yorkers are.”