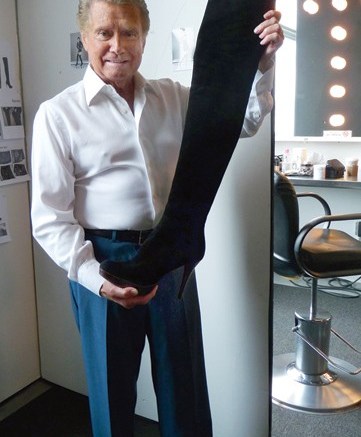 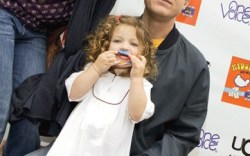 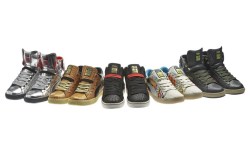 Close Encounter
Stuart Weitzman has a new fan: Regis Philbin. While the Weitzman crew was shooting an ad for its fall campaign at Chelsea Piers in New York, the “Live with Regis and Kelly” host, who was there shooting his own promo spots, made fast friends with team Weitzman. And Weitzman insiders said he was stunned to see the designer’s new thigh-high boots. The TV icon was so enamored with the design that he posed for a photo and requested a copy. Weitzman said he wasn’t surprised at the reaction. “When I heard that Regis Philbin was in awe of our fall thigh-high boots, he confirmed my suspicions when making it — that every man who sees a woman wearing this boot will be mesmerized by it,” he said. “I recommend he order a pair for his wife, Joy!”

With Honors
When it comes to footwear, comfort comes first for New York state first lady Michelle Paige Paterson. “I’m not really a person who pays attention to labels. I go for comfort. I’m not even much of a shopper,” Paterson told Insider at last Tuesday’s Kids in Distressed Situations luncheon at Le Parker Meridien in New York. Nevertheless, Paterson said she hit New York boutique Plaza Too to buy trend-right shoes (nude peep-toe heels from Butter) for the event, where she was honored along with Ugg President Connie Rishwain and Cookie editor-in-chief Pilar Guzmán for their contributions to K.I.D.S. and other children’s charity organizations. Rishwain brought her mother and daughter along for the event, which raised more than $76,000.

Famous Families
Rock ’n’ roll was here to stay last week at the Greystone Mansion in Beverly Hills, Calif., where Ugg Australia hosted dozens of famous families for the third annual Kidstock Music & Arts Festival. Among the crowd surfers were best buds Christina Aguilera and Nicole Richie with their children; Kelly Rutherford and her son, Hermes; Jason Bateman and his family (at right); Greg and Helen Kinnear; Jim and Jenny Belushi and former GNR guitarist Slash with his brood. A spokesperson for Ugg said that its custom airbrushing tent was a hit with guests. Aguilera and Richie got matching boots for their respective son and daughter painted with music notes and stars, while Slash had his son’s boots decked out in black and red. The charity event, which featured an acoustic performance from Ziggy Marley and sets by The Raymies, This End Up and others, raised $200,000 for the One Voice Scholars Program.

Monster Bash
Sportie LA co-owner Isack Fadlon is hoping more vendors will get scared straight with creative projects such as Puma’s new Monster Pack, a five-style concept designed around classic Japanese movie monsters. “It provides some excitement around the product and the brand itself,” he said. “It resonates. It’s critical, especially in a time like this.” To celebrate the collection, priced from $150 to $180, Fadlon recently converted an empty retail space next to his Melrose Avenue store into a 25-seat movie theater, where fans of Puma and cult monster films snacked on popcorn and hotdogs and watched some classic monster movies. Just how confident is Fadlon that this collection will connect with consumers? “Let’s just say we bought three times as much for that category,” he said.

Out to the Ball Game
Footwear heavy hitters — including Frye’s Jim and Larry Tarica, Kenneth Cole and Schwartz & Benjamin’s Danny Schwartz — made their way to the new Citi Field stadium in Queens, N.Y., on May 29 to watch Mets players do a little heavy hitting of their own. Frye and the Mets gathered nearly 800 people for the seventh annual “A Night to Believe” benefit, which raised $200,000 for Project A.L.S. And though Jim Tarica, who watched the game alongside son and Jimlar VP of private brands Tommy Tarica, admitted he tends to wave a Yankees flag, he was happy to see the Mets trump the Florida Marlins in the 11th inning. “I’m a New York fan,” he told Insider. “Whoever the New York team is, that’s who I’m rooting for.”