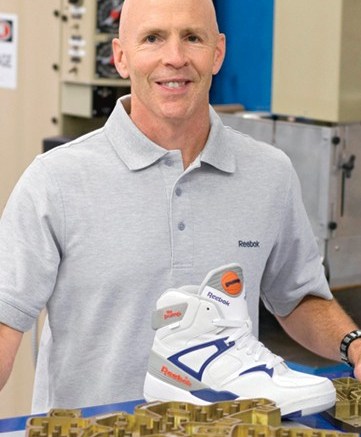 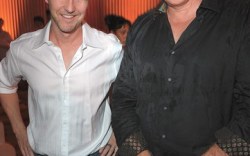 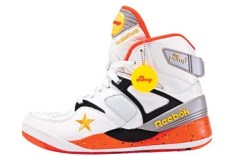 Pumped Up
Paul Litchfield isn’t done with the Pump — far from it. As Reebok marks the 20th anniversary of the iconic style on Nov. 20, Litchfield — the head of Reebok’s Advanced Concepts Group and creator of the style — continues to reimagine the airy concept and is implementing it in new ways. He was mum on the specifics, but said 2010 would be a hallmark year for new product introductions. “We have not been as coordinated or as focused on product as we are right now in a long time,” Litchfield told Insider. Meanwhile, the Pump is celebrating two decades with a slew of limited-edition collaborations with specialty sneaker shops around the globe and a party on Nov. 19 at Pop Burger in New York’s Meatpacking district, with special guests including former NBA star Dominique Wilkins and former NFL standout Emmitt Smith. While the Pump is now considered iconic, Litchfield said he didn’t set out to create a landmark shoe. “If you come out wanting to make an icon or a classic shoe, you kind of miss the point,” he said. “You have to create an attribute that wasn’t there before that fulfills a need, something that sets a new standard. We just wanted to make a really good basketball shoe.” But what propelled the Pump past being simply a shoe-of-the-moment and made it an icon? “I like to say it was an elegant execution: [It was] simple to use and simple to understand. On top of that, people could feel it work. The opportunity to interact with the shoe gave it its staying power.”

The Big Digs
Tarek Hassan has done it again. The retailer behind The Tannery and Concepts stores is bowing another Tannery location in Boston this week, though the grand opening is slated for March or April. Cambridge, Mass.-based Soldier Design created the three-floor, 21,000-sq.-ft. space, which sits in a high-traffic area close to Boston’s Mandarin Oriental hotel and an Apple store. The project, said Hassan, has been a labor of love from start to finish. “This is my baby,” he said. “This is The Tannery store that speaks the loudest.” Each floor has its own “language” through the assortment and merchandising, explained Hassan. The first floor is devoted to shoes, merchandised on special resin displays with illuminated features. A massive stone-crafted staircase lined with wood shelving leads to the second floor, which features denim, sneakers and outerwear, while the basement houses the store’s more exclusive lifestyle items. Top execs from Timberland, Thierry Rabotin, Mephisto and Sperry Top-Sider (not to mention Insider!) have come in to get an early look at the store, and the reaction has been stellar, said Hassan. “The feedback was unbelievable,” he said. “Many of them said it’s the best store they’ve seen.”

Winner’s Circle
Puma North America President Jay Piccola knows how to back a winner. Insider caught up with Piccola in Los Angeles last week at the brand’s African Bazaar event to support the Maasai Wilderness Conservation Trust, Celebrate Africa and the upcoming World Cup, and to congratulate actor Edward Norton (at left with Piccola) on his New York City Marathon run earlier this month to raise money for the trust. Piccola said it takes both skill and a little luck to know which athletes and teams to sponsor, and which ones will make the biggest impact for the brand, like Jamaican sprinter Usain Bolt. “Wasn’t that a good idea I had to have Usain beat all the records?” Piccola joked. Looking ahead to the World Cup, Piccola said there’s also a good chance that Puma will be on the feet of the winning team. “We feel we have a good shot with Italy,” he said. “But Ghana [recently] beat Brazil, so that shows the strength of the African teams, and they could go on a winning streak and win it all.” In total, Puma sponsors a dozen national African teams.