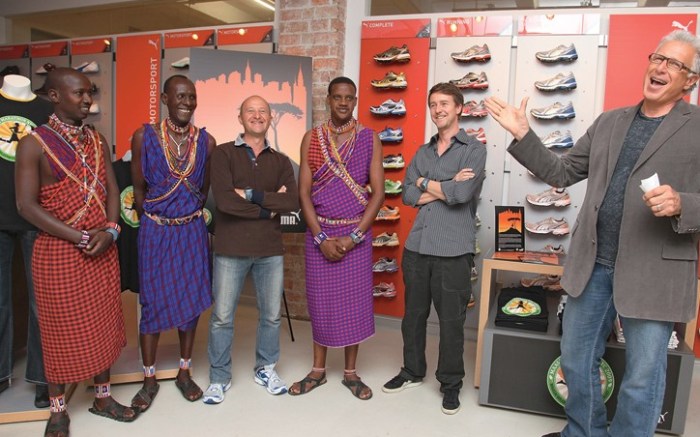 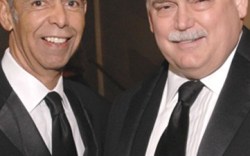 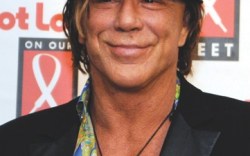 Running fans, look alive. Edward Norton will be among the many athletes lacing up for this Sunday’s ING New York City Marathon. The actor is running alongside several Maasai warriors and a team for the Maasai Wilderness Conservation Trust — and he’ll be sporting Puma running gear. Jay Piccola, Puma North America president and GM, told Insider at a press conference that thanks to a “mutual friend,” he and the Golden Globe winner (above, center) sat down for coffee in New York two months ago and discovered the Conservation Trust had a lot of goals in common with Puma’s charitable work in Africa — especially leading up to the World Cup this summer. (The exec was tight-lipped about what we can expect out of the company as it promotes the matches, but Piccola did say we will probably see “touches of Puma City,” the nightclub/retail space the brand erected for the Volvo Ocean Race.) As for Norton, the actor said that training had gone well for his first marathon — no injuries thus far— and that he had picked out a new pair of fall running shoes for the race. Norton’s personal relationship with Puma goes back a long time — all the way to his “Fight Club” days in 1999. Pointing to the beat-up pair of black Puma Suedes he was wearing, Norton admitted, “We got a lot of Puma stuff [after ‘Fight Club’]. I’m pretty sure these are from back then.”

Shoe king Christian Louboutin is adding the nation’s capital to his American travel itinerary. During an event at Bergdorf Goodman last Thursday — where the designer mingled with fans and decorated their crimson soles with his autograph and doodles — Louboutin dished with Insider about weekend plans for his first trip to Washington, D.C. “Now that it’s Obama, I’m perfectly happy,” Louboutin told Insider. “I never wanted to go before.” In addition to a public appearance, slated for the Neiman Marcus in Tyson’s Corner, Va., Louboutin said he planned to sneak in a bit of sightseeing.

Mickey Rourke sure knows how to work a room. At the Foot Locker On Our Feet gala at Manhattan’s Gotham Hall on Oct. 20, “The Wrestler” star (at left) spent much of the evening gamely greeting awestruck fans. Rourke revealed to Insider that he loves a good cause, so when the athletic retailer invited him to the event, which benefited the United Negro College Fund, he was all in. Sporting Converse kicks, the actor said he just wrapped filming on “Iron Man 2” and is now prepping to star in “Passion Play” with Megan Fox. But acting isn’t his only interest. Rourke said he’s a big fashion fan, naming Everlast, Puma and British brand Jeffrey West as his footwear faves. There were plenty of other bold-facers in the room as well: Brandon Jacobs from the New York Giants couldn’t stop talking about his affinity for Under Armour — no surprise, given that he has starred in the brand’s ad campaigns. “As they do more shoes, they’re going to be a force to be reckoned with in the footwear world,” Jacobs said. Meanwhile, on stage, new Foot Locker President and CEO Ken Hicks (above, at right with UNCF head Michael Lomax) presided over one of his first major events since taking the reins in August. Hicks said it had been a big week for the company, which also supported the “Making Strides Against Breast Cancer” walk in Central Park on Oct. 18.