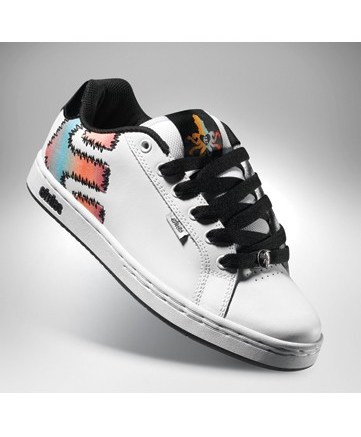 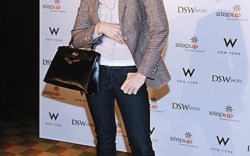 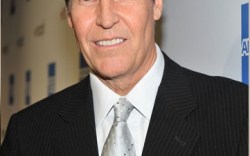 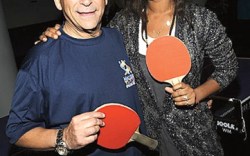 Kit Scarbo always thought her designs would appeal to girls her own age (which is to say 28), but the designer found out she had a different following after her appearance on “Project Runway” on season four. “I was shocked by how much of a response I got from girls between the ages of 8 and 18,” Scarbo said. That makes her new collaboration with Etnies, on footwear and apparel collections for spring (below) and fall ’10, all the more appropriate. Scarbo, who designs in her new Hollywood, Calif., studio when not running between her gigs as a stylist at E! Entertainment and for ABC’s “Dancing with the Stars,” said she was excited by the chance to share her positive message with the teen and tween girls who wear Etnies. “For me, it’s a new market, but I’m all about feminine strength and [saying] be your own person,” she said. Does that love of feminine strength carry over to her night job? Seems like it: Scarbo told Insider her favorite contestant on the new season of “Dancing” is Kelly Osbourne. “She told me she liked my hair, and it was like she was a boy I had a crush on or something!” she laughed.

As Jones Apparel Group’s newest retail concept, Shoe Woo, opened its doors to a VIP crowd last Wednesday, Insider learned some exciting news about Nine West creative director Fred Allard. Allard is receiving an ACE Award this year for “Influencer” at the 15th annual gala on Nov. 2 and will be introduced by Eric Daman, costume designer for “Gossip Girl,” who will also present Allard with the award. Woo hoo, Fred!

“These are the highest heels I’ve ever worn,” said Kelly Rutherford (below) of the sky-high, black peep-toe Jessica Simpson heels she sported for the “DSW Presents: Step Up and Step Out” charity event, held at the W Hotel in New York on Sept. 26. The “Gossip Girl” star was happy to talk footwear with Insider in between fielding other reporters’ questions about her bitter divorce battle. “[Being a mom], it’s important for me to have comfortable shoes,” she said, citing Tod’s, Lanvin and Havaianas as some of her go-to brands. Lately, the actress has also been snapping up infant styles from Sue London for her three-month old daughter, Helena. Rutherford joined event host and TV personality Vanessa Minnillo and DSW spokeswoman Bobbie Thomas — as well as more than a thousand other female footwear fanatics — for the fundraiser, which included a champagne brunch and designer shoe sale. In addition to DSW’s in-house label, select styles from Manolo Blahnik, Stella McCartney, Chinese Laundry and other big names were up for grabs, at deeply discounted prices. Proceeds from the event (some $300,000, organizers estimated) were donated to the Step Up Women’s Network, which provides resources for teen girls in underserved communities.

Are Jones Apparel Group CEO Wes Card and Macy’s CEO Terry Lundgren long-lost twins? Some people think so, according to a tale Card shared with Lundgren at the 27th Annual Macy’s Passport Fashion Show Benefit, held recently in Santa Monica, Calif. “It was the funniest thing — I walked into the Macy’s at the West Side Pavilion and all the employees came running up and they thought I was you,” Card said. Lundgren (below) seemed game to utilize his look-alike. “That’s great. I’m going to use you as my clone and you can do all my store visits. That would really help me out,” he joked. When the banter turned back to business, Lundgren told Insider that the shoe partner behind a celebrity line is what’s most valuable. “The only way celebrity lines work is when they align themselves with a great manufacturer,” he said. “Jessica Simpson is the best [celebrity line] we have. The lesson there is if you’re going to align with someone, align with Vince Camuto.” The benefit event, which was expected to raise more than $1 million for HIV-AIDS research, also attracted celebrities including Kathy Ireland, AnnaLynne McCord, Rachel Roy, Sharon Stone and Dame Elizabeth Taylor.

Stuart Weitzman was all about multitasking last week, mixing his passion for ping-pong with a charity event to raise money for ovarian cancer research. The event — held at Susan Sarandon’s posh new ping-pong club, Spin — brought out a gaggle of table-tennis aficionados, including New York Giant Danny Clark, actress Joy Bryant (at left, with Weitzman), model Carol Alt and Weitzman’s internationally ranked coach, Musa Atanda from South Africa. Though Weitzman admitted he hasn’t yet trumped Atanda at the table, he has had luck at another game. “I can beat him at chess,” Weitzman bragged.