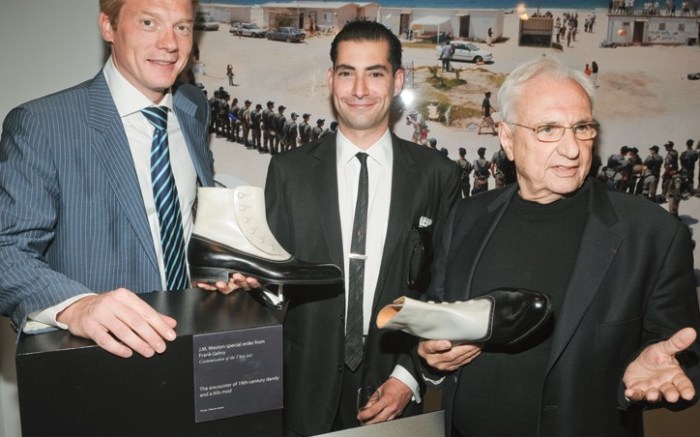 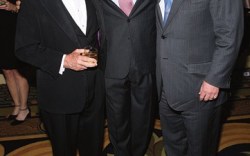 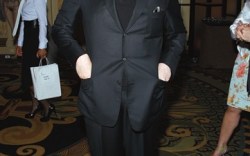 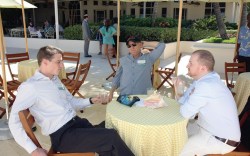 Art lovers, architecture fans, retail buyers and Tyson Beckford last week toasted French luxe brand J.M. Weston’s newest collection of limited-edition shoes and boots. They are the creations of famous design folks, including frequent Weston collaborator Michel Perry and architect Frank Gehry. The architect was on hand at New York’s Flag Art Foundation gallery to discuss the high-concept boots he created with son Alejandro. And while proud papa Frank downplayed his own contribution — “Designing shoes is like designing a chair,” he said. “It’s the same thing in terms of craftsmanship and function” — Alejandro told Insider he would definitely be interested in more footwear-related projects. “I would do women’s,” he said, with a cheeky grin. “There’s a lot more you can do with heels — and then there’s the legs.” All seven styles in the collection are on display in the J.M. Weston store in New York and available for special order through the end of the year, for $2,300 to $3,400. And the company divulged to Insider that the architecturally gifted might not be the only ones who could try their hand at shoe design. “We would like to take [this concept] one step further and allow all our customers to create their own models,” said Lionel Aster, international development director for J.M. Weston (above, with both Gehrys). He added that creators may be able to make their own models based on existing lasts as soon as this fall.

The shoe dogs were out in full force last Tuesday night for AAFA’s 39th annual American Image Awards. Wolverine World Wide CEO Blake Krueger accepted the Excellence in Lifestyle Branding award, while QVC chief Mike George nabbed Retailer of the Year and Mattel’s Barbie doll won the coveted Fashion Maverick title. Designer Isaac Mizrahi (below) presented the Lilly Pulitzer brand with the Spirit of a Woman award — and wore his Lilly love on his sleeve (or feet). “I have been so influenced by Lilly Pulitzer, and the shoes I am wearing tonight speak to that,” he said pointing to his Lilly-esque pink Belgian loafers. When Collective Brands’ Matt Rubel took the stage to present the Lifetime Achievement Award to Financo founder Gilbert Harrison (above, middle, with Rubel), he couldn’t help pitching Payless ShoeSource to Mizrahi. “We are always looking for guest designers, and we are happy to interpret [those] shoes,” he said. In other shoe news, Insider learned that Christian Louboutin’s work for the Barbie brand is far from over. The luxury designer shod Barbie models in bright pink peep-toe pumps at New York Fashion Week, and according to Mattel execs, there’s more to come.

As always, the Footwear News CEO Summit was a great place for scoops. Insider hears Diesel has a new footwear deal in the works, thanks to a collab with what Diesel USA CEO Steve Birkhold called a “major celebrity artist.” They also are slated to launch a series of Diesel footwear and accessories stores. … Soles4Souls is looking for ways to generate revenue. Could a branded shoe line be in the works? … Titan chief Joe Ouaknine is close to inking a deal for another celebrity shoe line. … And while everyone was friendly in Florida, don’t expect any partnerships anytime soon between Jimmy Choo CEO Josh Schulman and fast-fashion king Steve Madden (above). When Madden asked Schulman during his summit speech whether Jimmy Choo would create a diffusion line, Schulman quipped, “No, we are definitely not doing a diffusion label — and [Steve], we hope you won’t do one for us.”

Insider caught up last week with Brandon Day, co-founder of The Generic Man, to walk through the label’s upcoming 2,000-sq.-ft. pop-up store in Los Angeles. The pop-up, slated to be open June 6 inside an Urban Outfitters in the Space 15 Twenty retail center, will feature the largest selection of TGM shoes ever assembled, including 20 styles from its new women’s collection, which Day said are based on the company’s men’s styles and manufactured in a 100-year-old Portuguese shoe factory that specializes in men’s shoes. Stay tuned: Day said the company was in contract talks with a major designer to develop a shoe program.