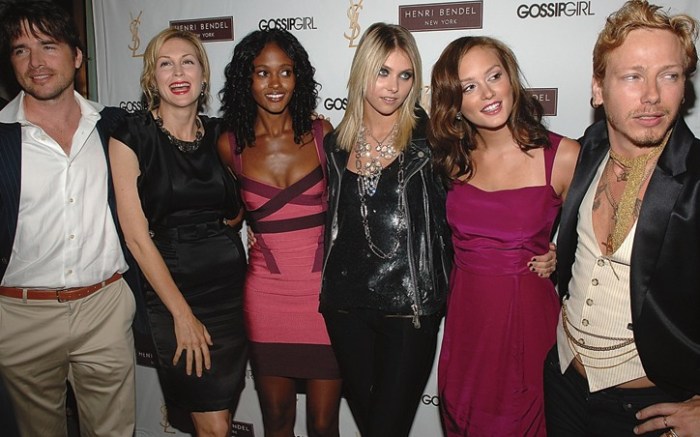 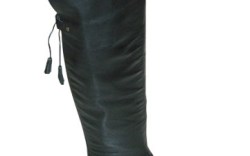 Gossip Gang
It’s no wonder Eric Damon, the fashion guru behind Serena van der Woodsen’s slinky dresses and Vanessa Abrams’ hipster style, has a few tips to share. The “Gossip Girl” stylist (at far right with cast members) made an appearance at NY’s Cooper Hotel last week to take in Nine West’s spring line with Creative Director Fred Allard and chatted with Insider about the December release of “You Know You Want It,” his new style guide. “It’s a little different,” he said, revealing that Leighton Meester, who plays Upper East Side princess Blair Waldorf on the show, wrote the book’s intro. “It reminds girls to have fun with fashion and [emphasizes] my mantra: Style is 20 percent fashion and 80 percent confidence.” But Insider didn’t let Damon get away without a little gossip about the show’s standout shoes. His faves? A pair of Nine West suede booties sported by edgy Jenny Humphrey during a season two fashion show and red, python-soled Christian Louboutin heels donned by Blair in a risqué burlesque sequence. “A work of art,” he gushed.

Sneaker Talk
Greeting fans and signing shoes was the order of the day last Wednesday for sneakerhead extraordinaire Bobbito Garcia. Garcia, the author of the definitive sneaker tome “Where’d You Get Those?” was doing a New York tour of sneaker shops to promote his line of Royal Flash kicks with Pro-Keds. Making his final stop at West on the Upper West Side, Garcia took a moment between signing his shoes and tees to check out the competition. Garcia said he was “stoked” to see styles from Los Angeles-based brand Clae on the shelf, given his friendship with (and respect for) Clae architect Sung Choi. “Whenever I see a store carrying them, I just get happy,” he said. Also at the event was Ari Langsdorf of sales group The Foundation (which handles the Pro-Keds account), who told Insider the collective just signed Native, the new brand that made a splash at Project with their renditions of classic slip-on men’s styles done in EVA. Langsdorf said the group was selling the brand now — look for it in key trend accounts come Jan. 1.

Sweet Charity
It’s been full steam ahead for Two Ten Footwear Foundation this month as it pursues its $2 million goal, set recently. On Oct. 13, the organization partnered with Off Broadway shoes for the 4th annual Off Broadway Atlanta Golf Tournament, where 150 golf enthusiasts and shoe industry vets raised more than $100,000 for the Two Ten Scholarship Program. And on Oct. 22, the Lawrence, Mass.-based group put in some sweat equity closer to home, pulling together almost 150 volunteers from area shoe firms (Puma, New Balance, Clarks, Reebok, Shoebuy.com and Converse among the many) to help clear trails, plant flowers and pick up trash with local nonprofit Groundwork Lawrence for the 7th annual New England Community Service Day.

Surprise, Surprise
At a cocktail event last week for Shoebox New York’s new store look, Insider caught up with one of the store’s vendors, designer Arturo Chiang, who said his customer base constantly pleasantly surprises him. “I did this over-the-knee boot [at left] for fall, and as we put it in the line, I thought that it would be too much for my customer,” he said. “But what do I know? It’s the best selling boot for fall,” he said. When it comes to his own shoes, the designer is too busy to take note. “I have no idea what brand I’m wearing tonight. But it matches [my outfit].” That’s all that counts, right?