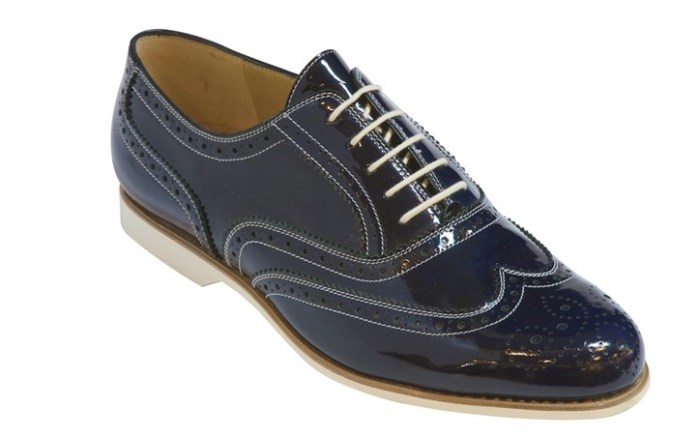 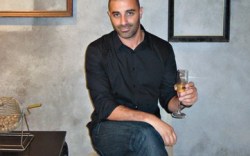 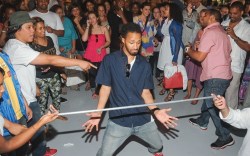 Reality Rules
Jon Gosselin, of “Jon and Kate Plus Eight” fame — and tabloid infamy — has evidently developed an affinity for high-end footwear. Insider learned the newly arrived New York resident was passing by the Madison Avenue men’s store Pravda Abbigliamento, which recently started offering shoes, when he spotted a pair of Lorenzo Banfi navy patent leather wingtips with white soles, white contrast stitching and white laces (at left). Gosselin, who was sans paparazzi, immediately scooped up the $950 Italian-made shoes. “He said he likes anything new and different,” said Philip Pravda, the store’s owner. “He also said everyone knows him now —
we certainly did.”

Match Maker
At the official launch of the Creative Recreation showroom on Green Street in New York last week, Insider had a great idea. Wouldn’t it be fitting if designer Dror Benshetrit (below) of Studio Dror, who designed the space, collaborated with Creative Rec on a sneaker? Co-founder and head designer of the brand Rich Cofinco agreed. “I hadn’t really thought of that,” he said. “Back in the day, we tended to shy away from collaborations because it became so trendy, but if we wanted to do it, a collaboration with Dror would make a lot of sense. I’d give you credit on that one!” We’ll stay tuned.

Crocodile Tears
Forget the red state/blue state squabbles. The new dividing line appears to be lovers and haters of Crocs. After an article appeared in The Washington Post declaring that the company could soon be out of business, Crocs CEO John Duerden responded with an up-beat statement on the company’s Website. But battle lines were drawn in the comments section of both sites. Defenders of the brand came to Duerden’s aid on the Crocs site. “This is what irritates me about the media,” wrote one fan named Jen. “They pick a line in the news and make it much bigger than it really is. Look how many people love Crocs. … Get real media! Crocs are definitely here to stay.” On The Washington Post site, though, John991 was less nostalgic. “All things must pass,” he wrote. “Remember the Hula Hoop? The Pet Rock? Beanie Babies? Rubik’s Cube? Mood Rings?” In Duerden’s next post, he might want to point out to John991 that a quick search on YouTube brings up 46,700 videos of Rubik’s fanatics. But that might not be saying much, considering that “pet rock” delivers a surprising 4,400 hits.

Shooze Cruise
Even before the limbo line really heated up, things were celebratory at DTLR’s second-annual New York vendor appreciation cruise, held earlier this month. As reps from some of the Baltimore-based retailer’s favorite brands — including Adidas, New Balance and Polo Ralph Lauren — sailed around Manhattan (but not the East Side — a visit from President Obama had shut down the whole area), footwear DMM Todd Kirssin told Insider that while the chain had definitely not had the best year, there were still some reasons to celebrate, including planned growth in Chicago, North Carolina, Florida and possibly Alabama. And Luis Navarro, lifestyle product manager at New Balance, hinted there could be big news coming from his Boston-based athletic company, as well. Elsewhere at the party, Insider heard that Reverend Run’s house could produce another shoe designer. (The hip-hop pioneer founded Run Athletics with his brother and fellow musician Russell Simmons, and his daughters Angela and Vanessa have already tasted success with their women’s sneaker collection, Pastry.) Solomon Dabah, EVP of Vida Brands, said that Simmons’ style-obsessed son, Diggy, is working on a line — possibly to be called State of the Art. Check out his blog, Digslifeofthejetsetter.blogspot.com, to see development in real time.

Grand Ol’ Flag
Salvatore Ferragamo was born in Italy, but America — where he shod movie stars and made his name — always had a special meaning for him. So, the Italian shoe master would have been pleased, no doubt, by the tribute paid to him last month in Washington, D.C., where the flag over the Capitol Building was raised in honor of what would have been his 111th birthday. Ferragamo reps told Insider that the flag, which was presented to the family post-raising, now hangs in the great reception room in the Palazzo Feroni, the Ferragamo headquarters in Florence.