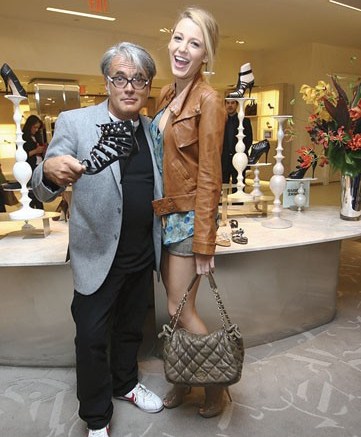 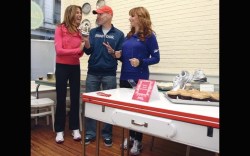 Italian Dressing
Giuseppe Zanotti drew the masses to Saks Fifth Avenue on Oct. 9, posing for pictures with every customer who purchased a pair of his designer heels. Along with the snapshots, shoppers walked away with one-of-a-kind sketches by the designer, and those who splurged on two or more pairs received their choice of a funky studded clutch or camouflage scarf. Insider quizzed Zanotti ­— who also spent time chatting with fan and “Gossip Girl” starlet Blake Lively about donning his daring over-the-knee boots — about his own dressing aesthetic. “This outfit is very funky,” he said of his ensemble of slacks and a jacket accessorized with red Ray-Ban sunglasses, Nikes with a red swoosh and a royal-blue Dries van Noten scarf. “These shoes are wrong with this jacket [and] these pants are wrong with this scarf, but together, it works.”

Sweetness
Insider caught up with Reebok and the “Real Housewives of New York City” at a “cupcake crawl” to promote the brand’s EasyTone styles. On Oct. 13, the ladies traded in their Louboutins for Reebok’s EasyTone styles, which have built-in balance pods. (The company claims the sneakers are more efficient at toning glute muscles, all the better to justify the night’s treats from New York’s Billy’s Cupcake, Milk & Cookies and Sweet Revenge.) And though the sneakers have a futuristic look, Bill McInnis, head of Advanced Innovation for Reebok, said the inspiration for the style came from the past. “Reebok did a commercial years ago [where] the lady in the commercial says these cushions [in the shoe] help these cushions [in the derrière]. And I thought that was perfect,” McInnis said. As for the Housewives, Jill Zarin and Kelly Bensimon (at left, with McInnis) quashed rumors of bad blood behind the scenes, insisting they are, in fact, real-life friends. “We have great chemistry [and] we want good things to happen,” said Bensimon.

Shoe Stopper
It looks like Rick Cytrynbaum is adding another celeb to his roster, which already includes Nicole Richie’s House of Harlow line. The Modern Vintage CEO told Insider he’s just signed a TV-star supermodel to create a collection of footwear. Our lips are sealed for now, but stay tuned for more details on the deal.