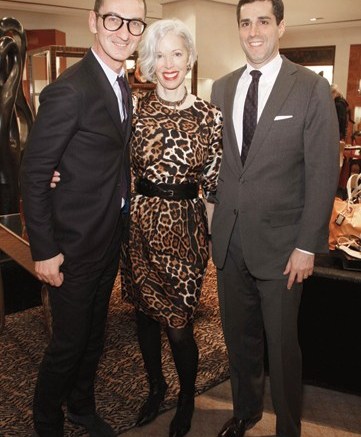 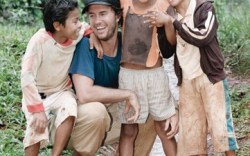 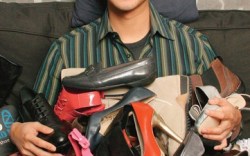 Frisoni Frisson at Bergdorf
Roger Vivier creative director Bruno Frisoni loves to mix work with play when he’s on the road. At a personal appearance at Bergdorf Goodman last Tuesday, Frisoni (at right, with Bergdorf’s Linda Fargo and Jim Gold) said he managed to find time to hang out with American friends in the Big Apple. “Last night I went bowling at Lucky Strike with Katy Perry,” he said, adding “with lots of vodka.” The designer said he’s a fan of Perry’s music, but cites actress Cate Blanchett as his design inspiration. “It’s difficult to have a muse today, when there are so many beautiful women, but if I had to name one, it would be her,” he said. On the business front, Frisoni has his hands full with several upcoming Vivier store openings: Taipei will bow in August; Osaka, Japan, in September; and a Miami boutique in November. And the designer is just as busy with his eponymous line, Bruno Frisoni. Look for those styles on the catwalk, he said. “I will [continue] doing shoes for Richard Chai’s runway, and I also am working on something with Jason Wu.”

Toms in More Places
Blake Mycoskie and Toms Shoes are getting some major airtime in AT&T’s new commercial. The footwear philanthropist (at left) stars in the company’s latest “More Bars in More Places” television ad, which began airing last Wednesday. The spot follows Mycoskie to Uruguay, where he donates shoes to needy children (and, of course, touts the handiness of AT&T’s cell service) in the most remote villages. Mycoskie said it’s another way to get the word out about the company’s charitable efforts and illustrates how companies can join forces for a worthy cause. “Our partnership with AT&T will allow us to reach even more people,” Mycoskie told Insider. A 60-second version of the commercial, as well as a Q&A with Mycoskie, are also featured on the AT&T Website, where visitors can learn more about Toms.

Happy Thoughts
All that twittering must have given Tony Hsieh the writing bug. The Zappos.com CEO told Insider he is close to signing a deal with an unnamed publishing house to release his first book. Tentatively titled “Delivering Happiness,” the tome will cover Zappos’ history, company culture, the science of happiness and how they all fit together. “It’s sharing how we think about things at Zappos and the things we do,” Hsieh said. The book, Hsieh’s first foray into the publishing world, should be out next year.