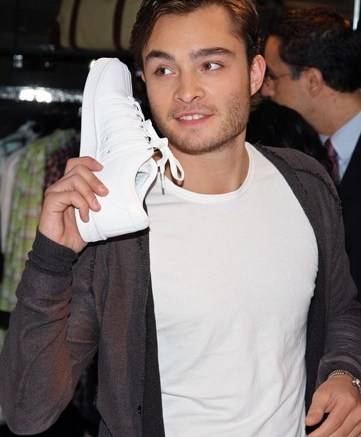 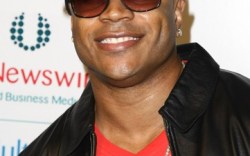 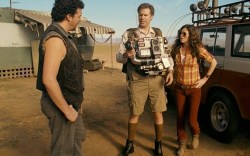 Gossip Guy
Hosting is hungry work — just ask Ed Westwick (at right). Insider caught up with the “Gossip Girl” star and face of K-Swiss’ “Classic Remastered” ad campaign at the after-party celebrating the shoe launch at New York’s Bloomingdale’s. Apologizing in between hors d’oeuvres — “I haven’t had a chance to eat today,” he said — Westwick told Insider that K-Swiss had values he admired. “They know who they are,” he said, adding that he would love to do another installment of the black-and-white campaign he shot last fall. But on to more important things: Is there a place for K-Swiss in the wardrobe of Chuck Bass, his ultra-dandified “Gossip Girl” alter ego? “Absolutely,” he said, without hesitating. “I see him wearing them on the basketball court.” Nearby, DJ Josh Madden (who also runs DCMA Collective with his brothers Joel and Benji of Good Charlotte) gave Insider some advice for keeping a party moving. “If you want to be a good DJ, all you have to do is worry about making the ladies dance,” he said. Also feeling the beat was David Nichols, EVP of K-Swiss, who hinted that news would be forthcoming about the new California Youth action-sports label, which is a major facet of the Westlake, Calif.-based company’s turnaround plan.

On Their Feet
At the “Pay It Fashion Forward” event, hosted in New York earlier this month by Fashion Delivers, several of the night’s honorees dished on their footwear of choice for the evening. “Brooks Brothers,” said Wes Card, who was accepting an award on behalf of Jones Apparel Group for the company’s socially responsible business practices. “They’re a real classic,” he added. Another award winner of the evening, eco-friendly designer Linda Loudermilk, confessed her love for Christian Louboutin shoes, which she uses for her runway shows. Rachel Roy paired Manolo Blahniks with a dress from her Rachel Rachel Roy line. But the real style star of the evening was event host LL Cool J (above), who wore pieces from his eponymous line for Sears and was eager to talk about the partnership. “It’s going very well,” he said. “But it takes time, it’s a journey. The goal with the brand is to give the masses a taste of fashion-forward stuff with flavor that’s also affordable.” Donning Gucci shoes, the rapper also listed John Varvatos and Louis Vuitton as footwear favorites.

Breakfast at Duckie’s
Insider recently sat down with Duckie Brown’s Daniel Silver and Steven Cox for a sneak peek at the apparel duo’s Florsheim by Duckie Brown spring ’10 footwear collection. Over muffins and coffee at L.A.’s Chateau Marmont, Silver said, “I think [Florsheim] was initially afraid we’d show up with polka-dot shoes with stripes on the bottoms. But we just wanted to do shoes we’d want to wear.” And while Silver said he enjoys the applause he’s received from Barneys New York and other high-end department stores, he’s waiting for a little more street recognition. “Our goal is to see our shoes ripped off on Canal Street [in New York],” he joked. In other Florsheim news, the brand got some high-profile exposure in recent weeks, thanks to the “Land of the Lost” movie starring funnyman Will Ferrell (below), who dons the Essex boot throughout the film. But be warned: Not every man has the legs to pull off the Essex in shorts. Let’s leave that to the pros. — With contributions from Lindsay E. Sammon